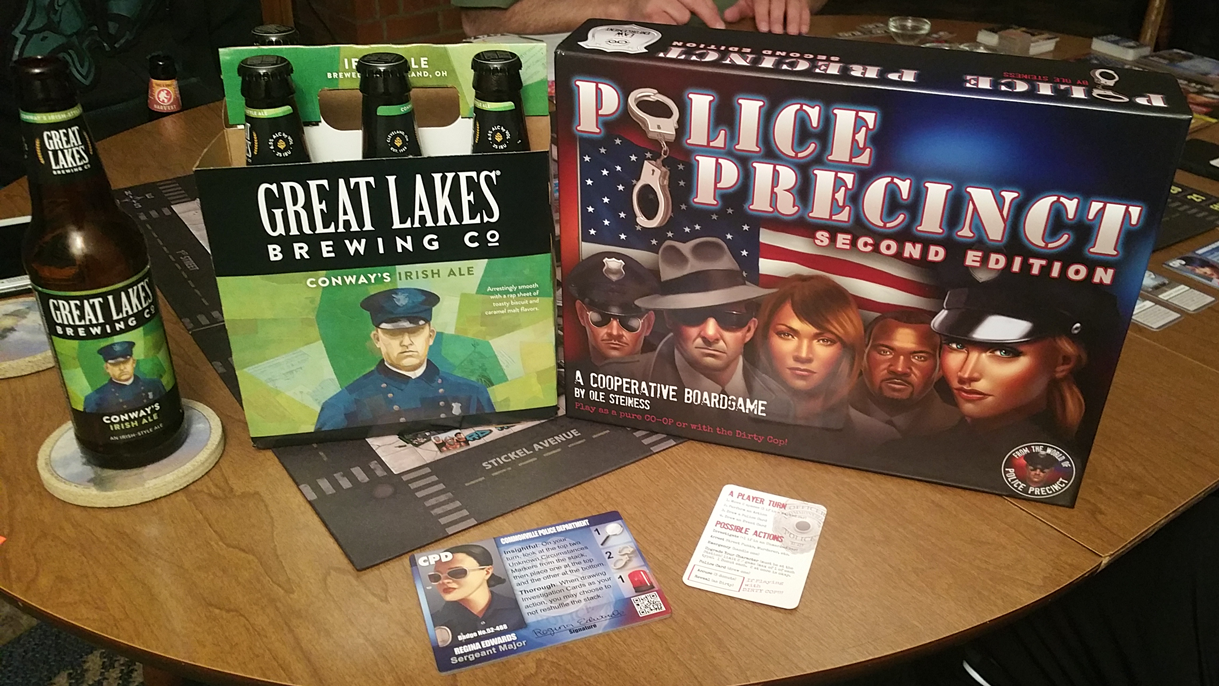 This week, the veteran gamer of our group, Tom, invited us over to play Police Precinct by Common Man Games. So naturally we grabbed a cop-themed beer and headed over to make an impromptu Game & Beer Pairing of it.

In Police Precinct, players are cops trying to solve a murder before the killer can escape. But to say that’s all the game is about is like saying The Lord of the Rings is about a couple of short people carrying a ring to a mountain.

There’s been a murder. You and your fellow police have to find the murder weapon, collect crime scene data, obtain the autopsy report, and interview witnesses… and only then can you find and arrest the murderer.

But wait, there’s more! While all that’s happening, all sorts of other bad stuff is going to go down. Maybe a thief will take a hostage at the bank. There might be a traffic accident at a nearby intersection, making it impassable. There might even be a prison break, flooding your streets with Punks.

So while you’re trying to solve a murder, you also have to make sure that none of this other stuff gets out of hand.

In fact, this game is so thematically and mechanically sound that police departments use it to train new recruits in crisis management. No kidding.

We paired this game with Conway’s Irish Ale by Great Lakes Brewery. Why? Mostly because it’s got a cop on it. Also because it was a great excuse to pretend we were grizzled Irish cops working the beat in Boston, mercilessly butchering words like harbor (“hah-buh”) and Hartley (“Haht-lee”).

Because we’re adults, and that’s what we do.

We played the recently-released 2nd Edition, which upgraded to a colorful, eye-catching board, a more thorough rulebook, and some double-sided tokens. Having never played the 1st Edition, we can’t really say how much has improved, but we can say that everything was laid out well and very intuitive.

But what really makes Police Precinct a great game is the storytelling element that you build as you play. For example:

Mike, in his unmarked police car, was on his way to the morgue to investigate the autopsy report when he got sidelined by a domestic violence call that was upgraded to “urgent” status.

Meanwhile Tom, who was collecting crime scene data, got pulled away due to a prison van that required an immediate escort. 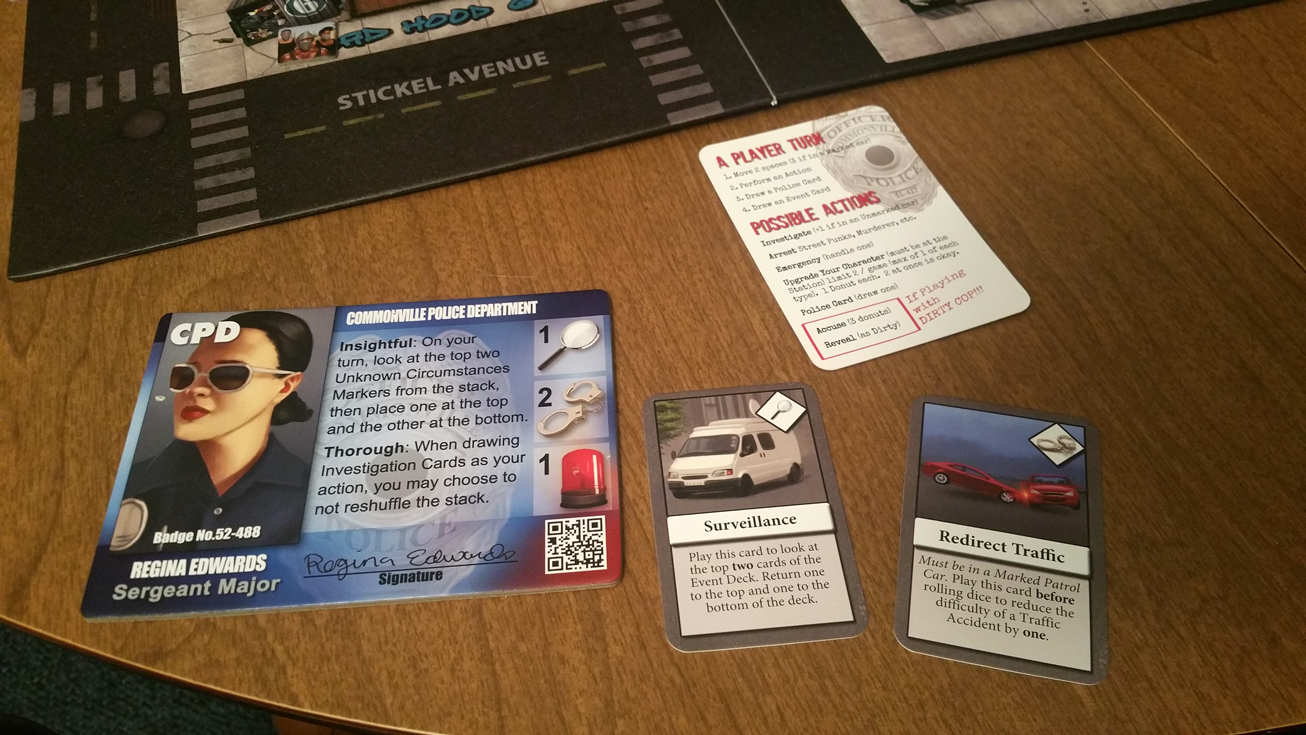 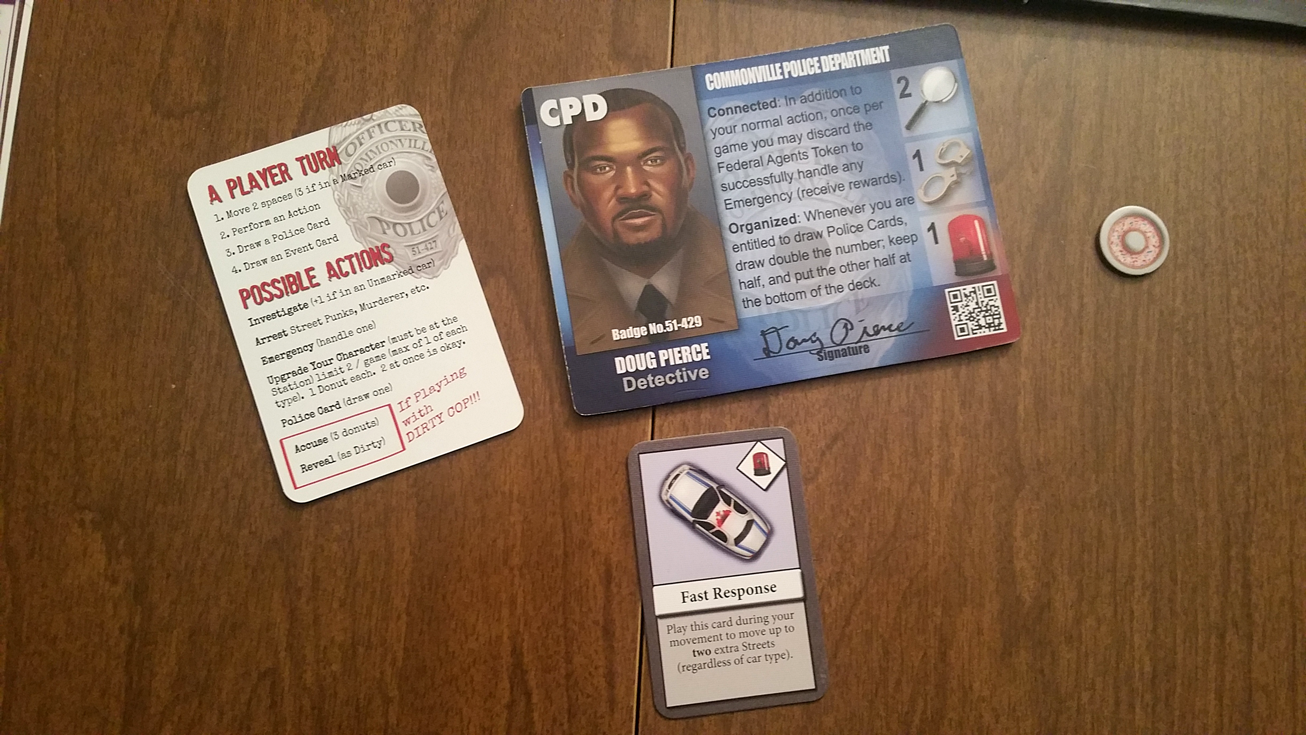 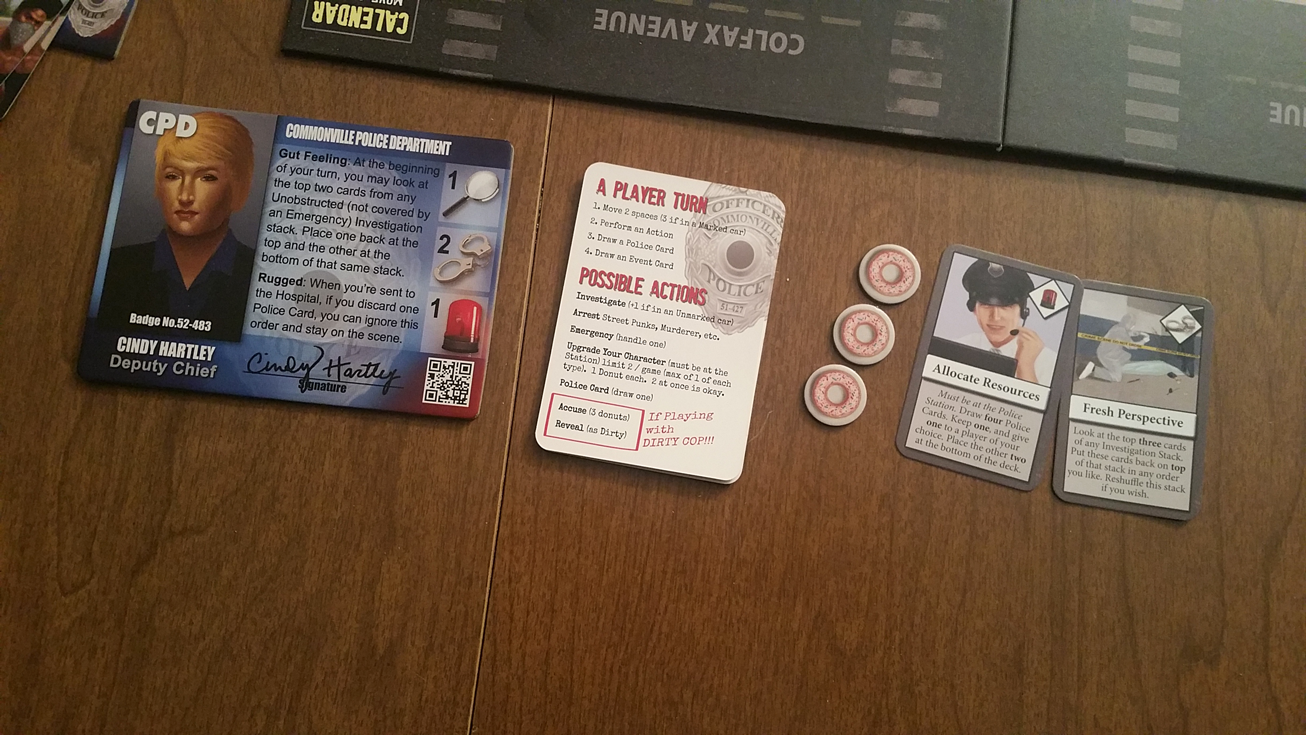 And then a sports car got jacked and, because we were all off doing other important cop stuff, the thief got away, thus increasing the crime rate.

This is the type of cooperative game in which there’s little autonomy. Players really have to talk to each other, decide collectively what each of them is going to do, and sometimes a round or more in advance, so that crises are managed appropriately.

If you choose to try to ignore the emergencies and just focus on solving the murder, you’re going to lose—emergencies escalate, raise the crime rate, and if it reaches a certain level, the game ends in defeat.

It’s a very well-balanced game. When your turn is over, you feel like you’ve done something deserving of a long sip of Conway’s Irish Ale. Conway’s is a full-bodied seasonal Irish red with strong notes of caramel and biscuit malts. It’s a bit heavier than a session-style red ale, but the taste is bold without being too sweet. We found ourselves sipping once or twice per round, usually after busting some Punks on Block 6.

Oh, Block 6. In our game, Block 6 was the place you would tell out-of-towners to avoid. It seemed like all the worst stuff happened there—Punks everywhere, emergencies left and right, two traffic snarls, and a riot in the streets.

But as a fearless unit, we had no problems swooping in, kicking ass, and making arrests.

We won Police Precinct with four players, but it came pretty close. Our murderer was on Block four of six (and once he escapes the sixth block, we would have lost) and our Crime Rate was two spaces away from failure.

Police Precinct is a game rife with decisions, frustrations, hidden variables, lots of holding your breath and hoping for the best, and implementing strategy. We can’t wait to play again.

And did we mention that the currency in this game is donuts? How great is that?!