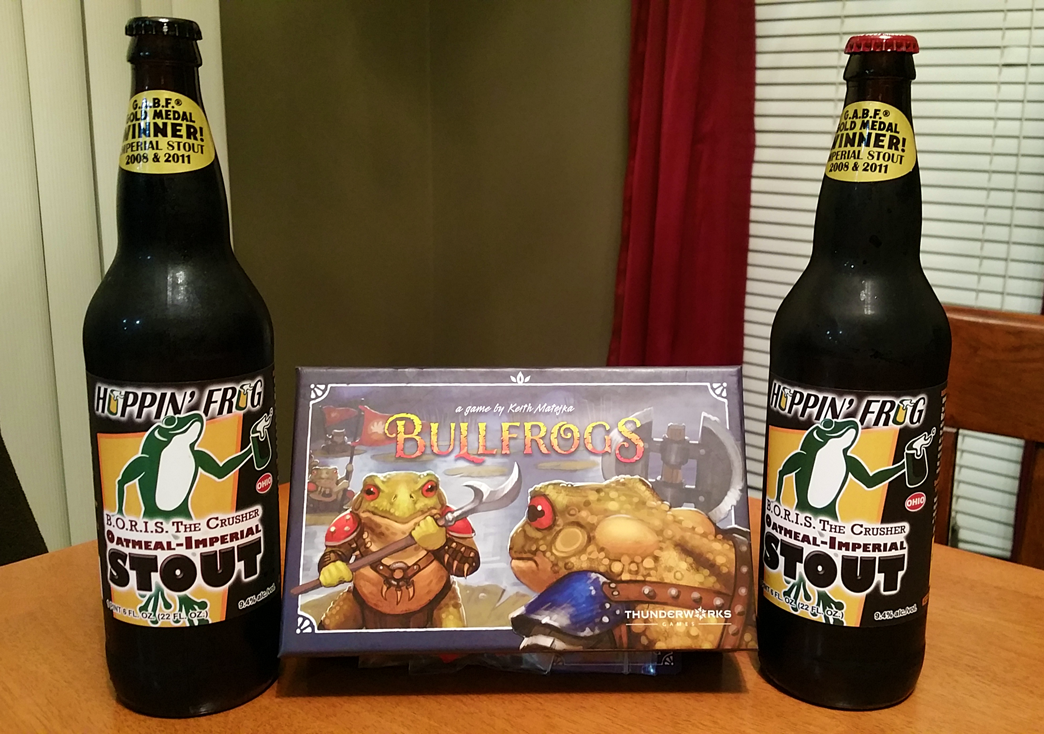 Lately we’ve been playing a lot of games that rely fairly heavily on luck, so we’ve been craving something with a bit more strategy in our Game & Beer Pairings, something in which players have more control over the outcome. You know, like chess… except not chess.

Bullfrogs by Thunderworks Games fits that bill perfectly. It’s a fairly small game that Eric received a while back by way of Kickstarter, but since Bullfrogs is four players max, we had to wait for a night when our game group was smaller than average. Well, we finally got our chance, so three of us sat down to play.

The concept of Bullfrogs is simple: Each frog army is vying for control of the swamp by having the largest presence on any given lily pad. On your turn, you play a lily pad card, and then spend action points either deploying your own frog forces, or sabotaging an opponent by moving theirs.

That’s a very basic gist: there are all sorts of nuances about how to deploy frogs, where you can move frogs, and how it affects end-game scoring, all of which lend to the overall high-strategy nature of the game that appealed to us in the first place.

The beer pairing here was a no-brainer: We partnered Bullfrogs with a stout by Hoppin’ Frog Brewery called—no kidding—B.O.R.I.S. the Crusher Oatmeal Imperial Stout. That’s quite a mouthful, but so was the beer!

Bullfrogs is a good game for smaller tables. Even though it consists of a modular board, cards are removed as they’re scored, so there was plenty of room for coasters, elbows, and beer.

The level of strategy in this game may not be very apparent at first, but just about everything you do requires some thought—every card you play, where you play it, how you place frogs, and where you move frogs. By mid-game, taking an action that scores you a lily pad card on your turn will likely give your opponents an opportunity to score right back. This is a game that requires rational thinking, cogency, and a clear head.

…So naturally, we paired it with a beer that’s 9.4% ABV. We started feeling the weight of B.O.R.I.S. the Crusher about halfway through the game, and though it didn’t derail any lines of thoughts, it certainly didn’t help. But it was tasty, so whatever.

In Bullfrogs, each player only gets two bullfrogs (with battleaxes!) and once you lose ‘em, you don’t get them back, so a big part of the strategy is how and when to play these guys.

Speaking of frogs, the Hoppin’ Frog oatmeal stout is dark. Like, velvet-against-a-starless-night-sky dark, with a foamy brown head. This is not a beer for the casual drinker, but it was delicious—roasted malt flavors with hints of dark cocoa were most prevalent, with a tinge of sweetness. B.O.R.I.S., the acronymic namesake, stands for Bodacious Oatmeal Russian Imperial Stout. We’ve never heard of a beer described as “bodacious” before, but if they’re referring to the full body of this brew, it’s apt.

In the end, Bullfrogs was a close game. Alfred scored 41 points, Anthony came in second with 43, and Eric won with 46. (Lucky for us, Mike was notably absent, because he’s “that guy” that usually doubles someone’s score.)

Which heavy-strategy games are your favorites?