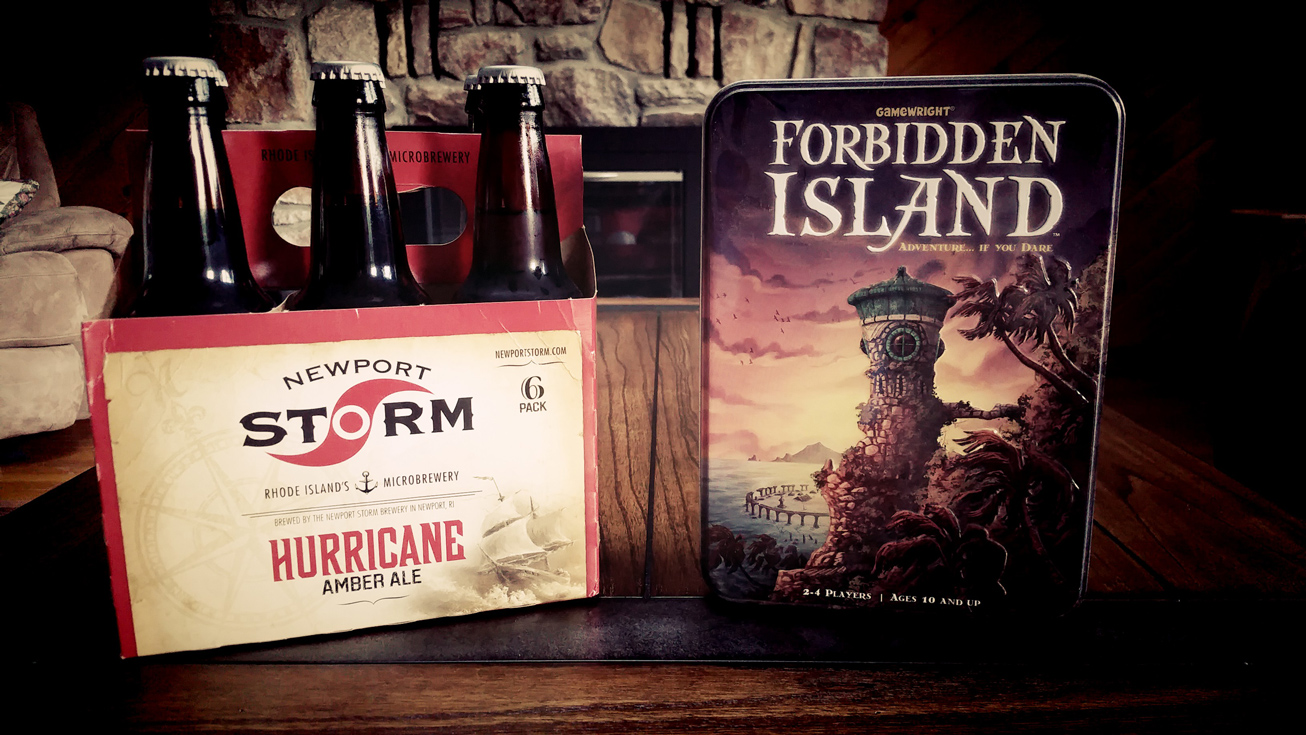 Forbidden Island has become such a classic in our eyes that it’s hard to believe it came out only six years ago. The mechanics are unique, the art is beautiful, and the game requires some serious strategizing and cooperation. Like Catan or Ticket to Ride, Forbidden Island is just one of those games that every collection should have… which is why we chose it for this week’s Game & Beer Pairing.

We all know that when someone says, “It’s forbidden!” you just have to go and do the thing, which (we like to imagine) is how the players—adventurers searching for long-lost treasures of an ancient civilization—end up on the Forbidden Island.

And of course, as soon as there are people on it, the whole island is like “oh, no you don’t” and starts to sink. Piece by piece, the island will disappear into the sea if you don’t do something about it.

On their turn, players can shore up a flooded tile, move, collect a treasure, or trade treasure cards. Each player has a special ability that will aid their team in some way, and certain treasure cards will provide some assistance as well.

The goal is to collect four like treasure cards, thus allowing you to collect that treasure. Do that four times, and get safely back to Fools’ Landing, and win the game.

Fail before the island sinks, and you lose. If both tiles that allow you to collect a treasure sink before you get that treasure, you lose. If Fools’ Landing sinks, you lose. If the water level gets too high, you lose.

…We could keep going, but you get the idea. It ain’t called “forbidden” for nothing.

We paired this game with Hurricane Amber Ale from Newport Storm Brewery. This beer was the first in Newport Storm’s lineup, and continues to be their most popular—and for good reason.

First of all, can we talk about the box? Good gravy, if this isn’t the nicest packaging we’ve ever seen (without being a “deluxe” version, special edition of a game, or Hogger Logger). Forbidden Island comes in an aluminum box with a custom molded insert that holds every piece so nicely that there’s little to no chance that pieces will get shuffled or jumbled in transit.

Seriously, if you have the game, go shake the box for a few minutes. We’ll wait.

Anyhow… This Game & Beer Pairing was born out of the two of us having a little time to spare one afternoon, so we did a two-player game. Eric took the Engineer, and Anthony was the Explorer.

Neither of us had ever played a two-player game of Forbidden Island before—usually we play four-player games to maximize our efficiency—so we expected a challenge.

Before we go into what happened, we should mention that the game scales well for the number of players. The island takes a turn after each player’s turn, so the probabilities of drawing the necessary treasure cards or getting the grimace-inducing Waters Rise cards are the same regardless of how many people are playing—it’s just a matter of how many turns each player gets to take.

Like we said, we expected a challenge. But fortune was smiling upon us, and everything just kind of fell into place.

Two of the four treasures were scooped up quickly without a single Waters Rise card coming out. We drew all three Helicopter Lifts within a few turns, allowing us to jet around the island in style to collect and shore up what we needed. Even our board layout, which is randomized at the beginning of the game with modular tiles, was serendipitous; everything we needed was within one or two tiles of Fools’ Landing.

And while we’re on the topic of easy, that’s precisely how Hurricane Amber Ale goes down. At 5.2% ABV, it’s a mild brew that balances hops and malts nicely with a slight emphasis on sweetness. The scent and taste of caramel comes through dominantly, but not overpoweringly; the hops offset that with a tinge of bitterness that makes this a pleasant amber ale that rivals some of our other favorites.

This session may have been (by far) the easiest game of Forbidden Island either of us had ever played, but that’s not to say the game is easy. The thing we like most about it is that the randomization of layout and cards could make things quite simple, or could make for a really difficult time. No two plays are the same—which, for us, is a hallmark of a well-designed game.

If you were stranded on a desert island, what one beer would you bring along?