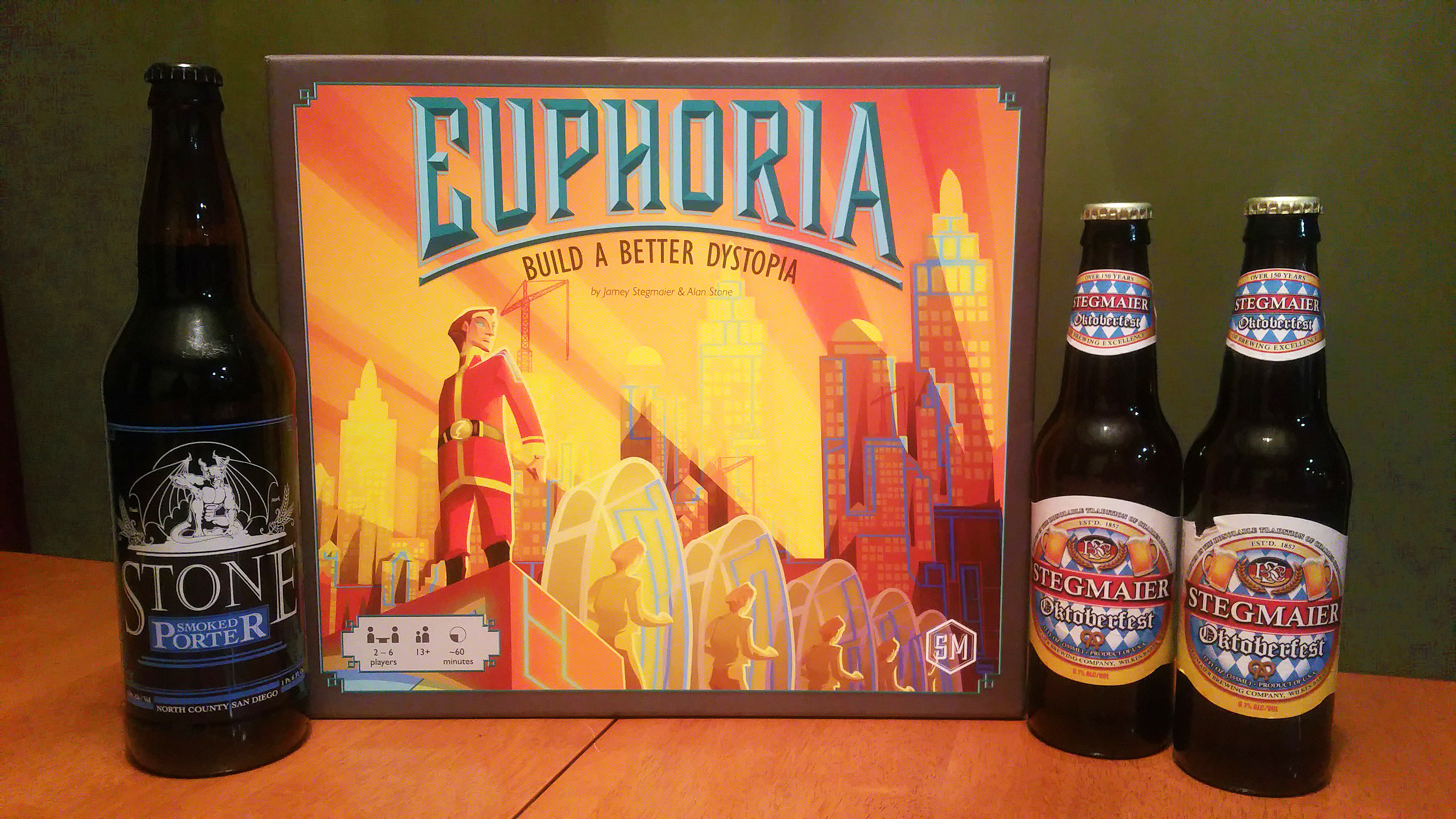 As both avid gamers and designers, we try to maintain that all games are created equal—yet there’s something magical about the products that Stonemaier Games puts out that leaves us shaking our heads in mild astonishment.

For this week’s Game & Beer Pairing, we played Euphoria, a game about faction managers of a dystopian society vying for control. Think 1984 meets Jules Verne with an occasional dash of humor (like sneaking in a depiction of their first game, Viticulture, as an “artifact,” or naming one of the artifact markets the “Free Press of Harsh Reality”).

Euphoria is a worker placement game that’s anything but ordinary, and we don’t have nearly enough room here to explain all the whys and hows, but there are two rather noteworthy ones.

Instead of flat wooden meeples, your workers are dice and the value they show has multiple gameplay implications.

The win condition is also opposite of what you might be used to in this sort of game; rid yourself of ten authority tokens that you start the game with by properly collecting and allocating commodities, resources and artifacts.

Turns are deceptively simple: On your turn, either place a worker, or remove worker(s). While getting that down is a cakewalk, the strategy of your actions is a bit more involved and careful planning is rewarded.

We paired Euphoria with two beers: The first was Stegmaier Brewery’s Oktoberfest, an American-made German-style lager. The second was Stone Smoked Porter by Stone Brewing Co., a smoky, malty brew.

Why two, you ask? Because the two designers of Euphoria are Alan Stone and Jamey Stegmaier. (See what we did there?) While both are clearly brilliant, the latter runs an extremely helpful blog for game designers that has aided us several times.

Euphoria is fairly component-heavy—there are commodities, resources, authority tokens, dice, etc.—but undeniably pretty. The board included in Eric’s Kickstarter edition is double-sided, one in color and the other in black-and-white, for those that prefer their dystopia a la The Giver, and his resource tokens are of a premium variety (very nice resin and metal casts).

Because a few of the mechanics are fairly unique, prepare for a solid thirty minutes of rules explanation for newbies, with a lots of head scratching along the way (Tip! The Euphoria FAQ has a great section on teaching the game to help you out!).

Then play a round and everything falls into place.

Each faction is unique, yet simultaneously familiar—like the haughty Icarites, who hang out in their airships in the sky and (literally) look down upon everyone else. Or the Wastelanders, whose name we can only assume is a disdainful epithet, since they’re the only ones in this world who can grow food.

One thing we really like about Euphoria is that it has the snowball effect, similar to games like Machi Koro or Settlers of Catan; things start a bit slow, but once you get rolling, authority tokens begin disappearing every round. Much the same way as our glasses seemed to empty even faster toward the climactic end of the game.

The Stegmaier Oktoberfest is a solid, smooth beer. Yeah, we know, it’s January, but here’s a fun fact for you: traditional Oktoberfest beer are Bavarian-style lagers called Märzen that were served—you guessed it—at Oktoberfest, as that was when they were considered to be in the best condition to drink. Many Märzen-style beers are now brewed in America, and the name transitioned from Märzen to Oktoberfest with more widespread adoption of the celebration.

Anyway, it’s a good beer, and we enjoy its reddish-brown, full-bodied taste with just a tinge of sweetness. If you’re into darkish lagers and live in the northeast, give it a shot (though you may need to wait for next year’s batch, since it was tough finding this last bit!).

And while we’re on the subject of dark beers, the Stone Smoked Porter is a perennial fan-favorite from Stone Brewing Co., made in the style of traditional English porters with notes of chocolate and coffee. The smoky taste is not aggressive and balances well with the other flavors. (It’s worth noting that Eric doesn’t like most smoked beers, but really enjoyed this one!) If you’ve never tried a porter before, this probably shouldn’t be your first, but if you’re looking for something a bit different, this one is available year-round.

The strategy in Euphoria can get pretty intense; there are several avenues that a player can take, so the seemingly-best strategy is to pick a method of ridding yourself of authority tokens and run with it. Of course, like other games, that strategy can be destroyed by a territory filling up before you complete your scheme or someone beating you to the completion of a market’s construction.

However, all is not lost if someone beats you to the punch! Solving ethical dilemmas (a once-per-game choice you can make to place a token or possibly recruit another faction) and revealing recruits (a triggered event that provides you with new abilities and the possibility of placing another token) can quickly close a 1 or 2 authority token gap if executed properly. 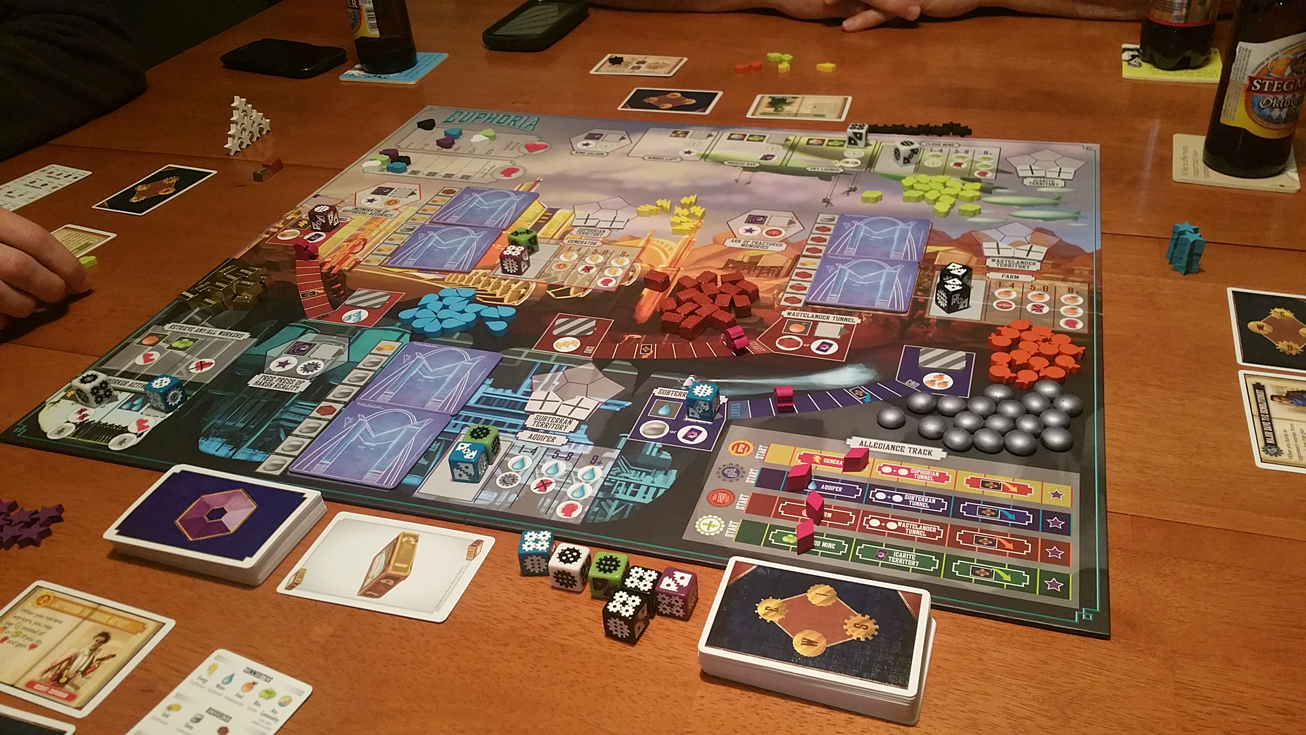 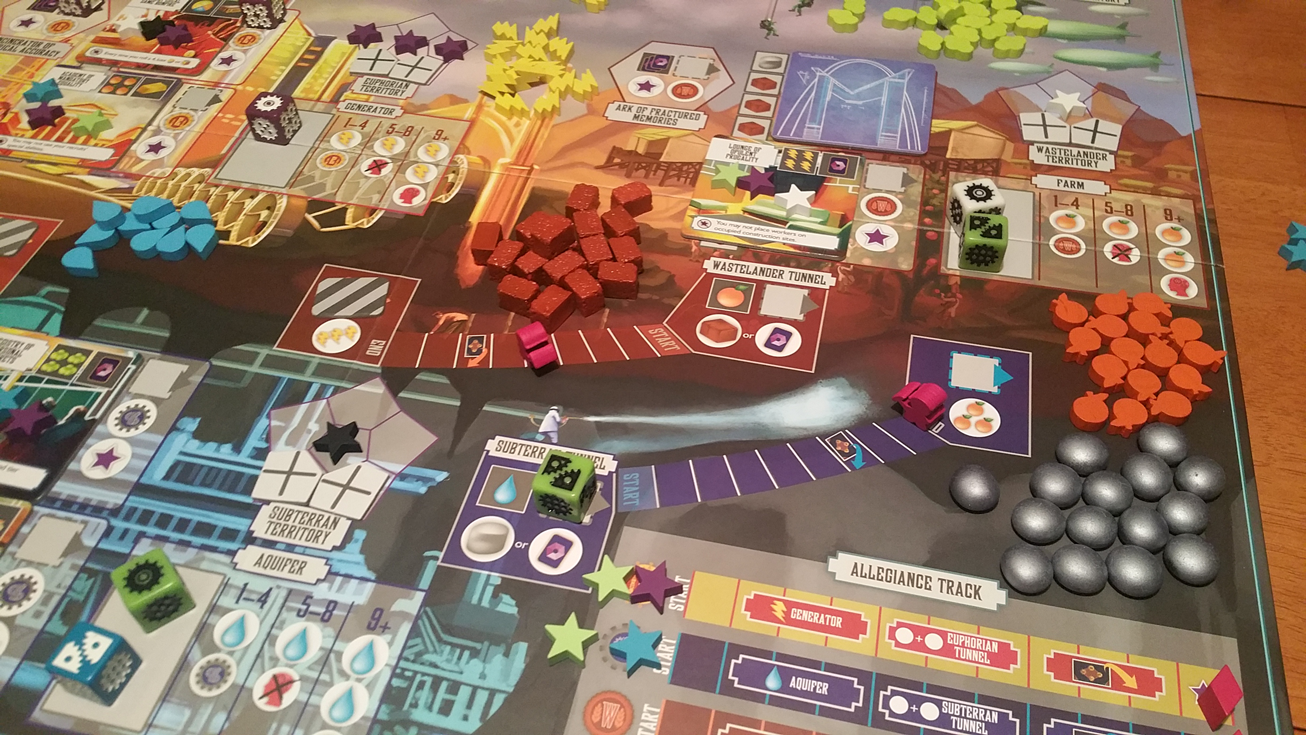 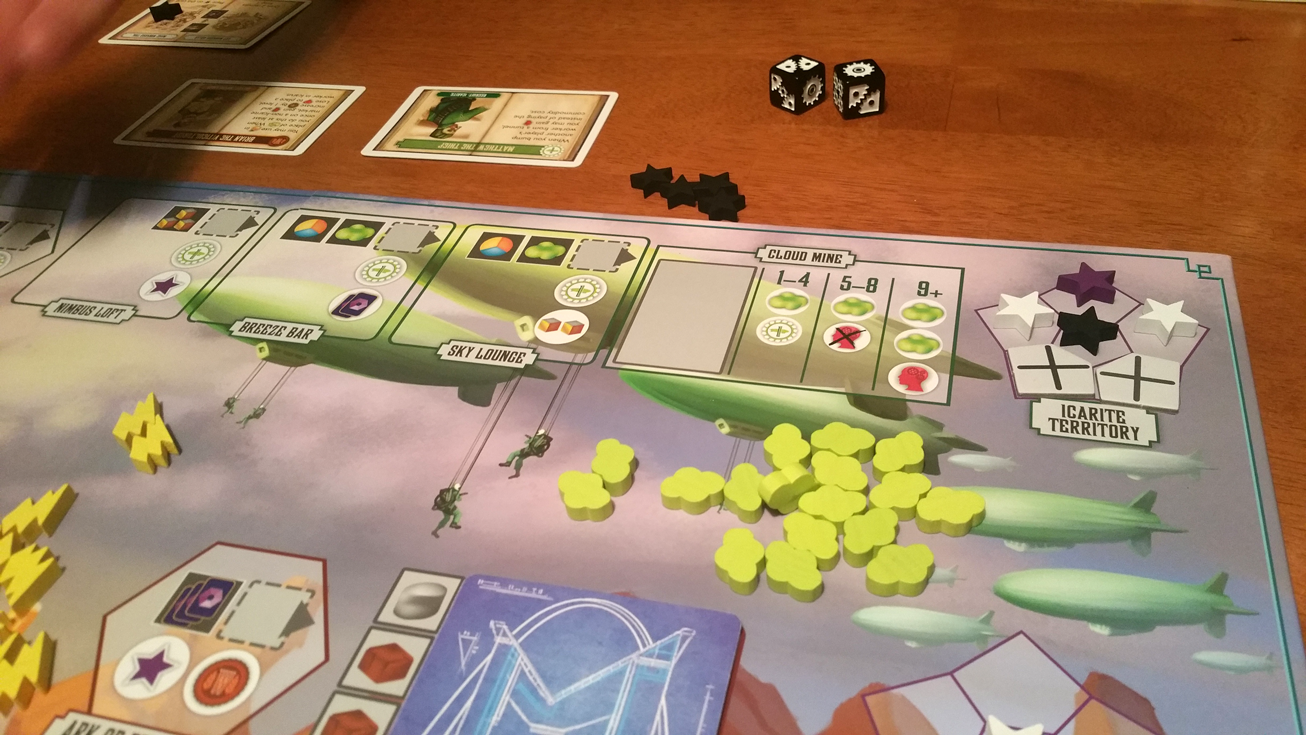 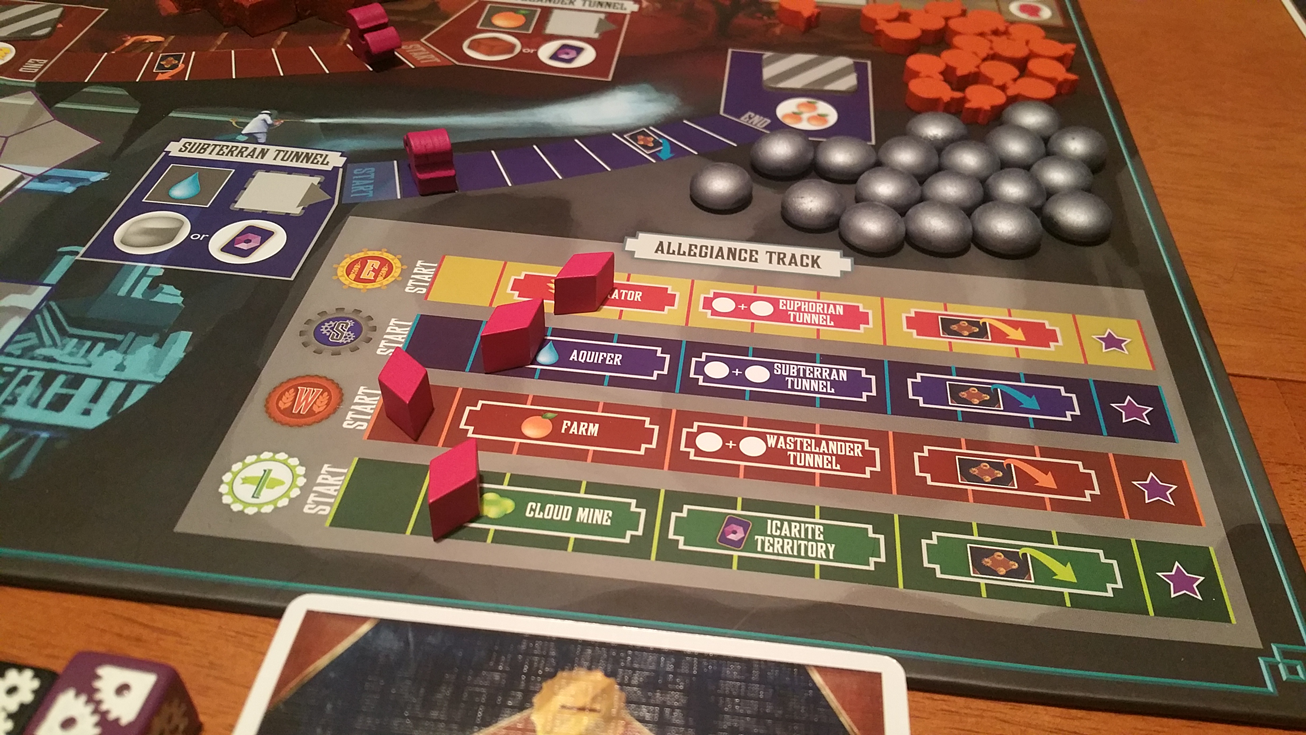 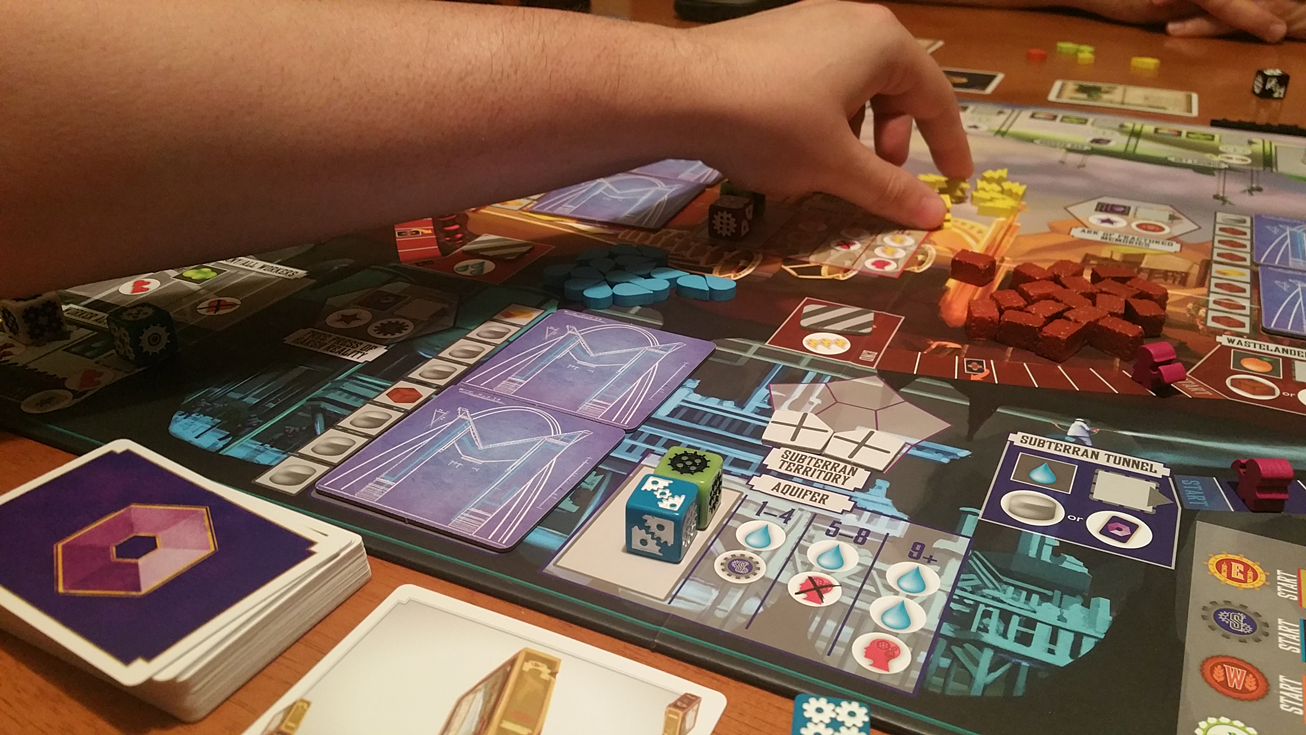 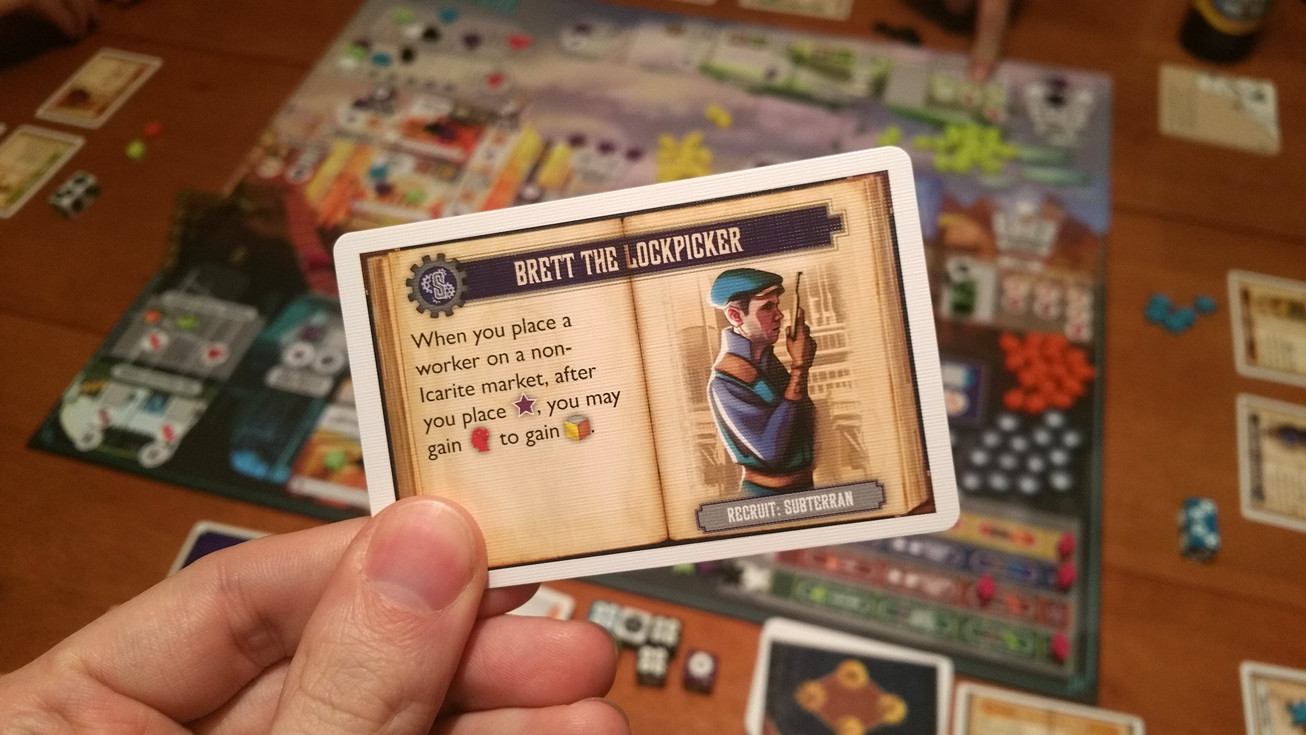 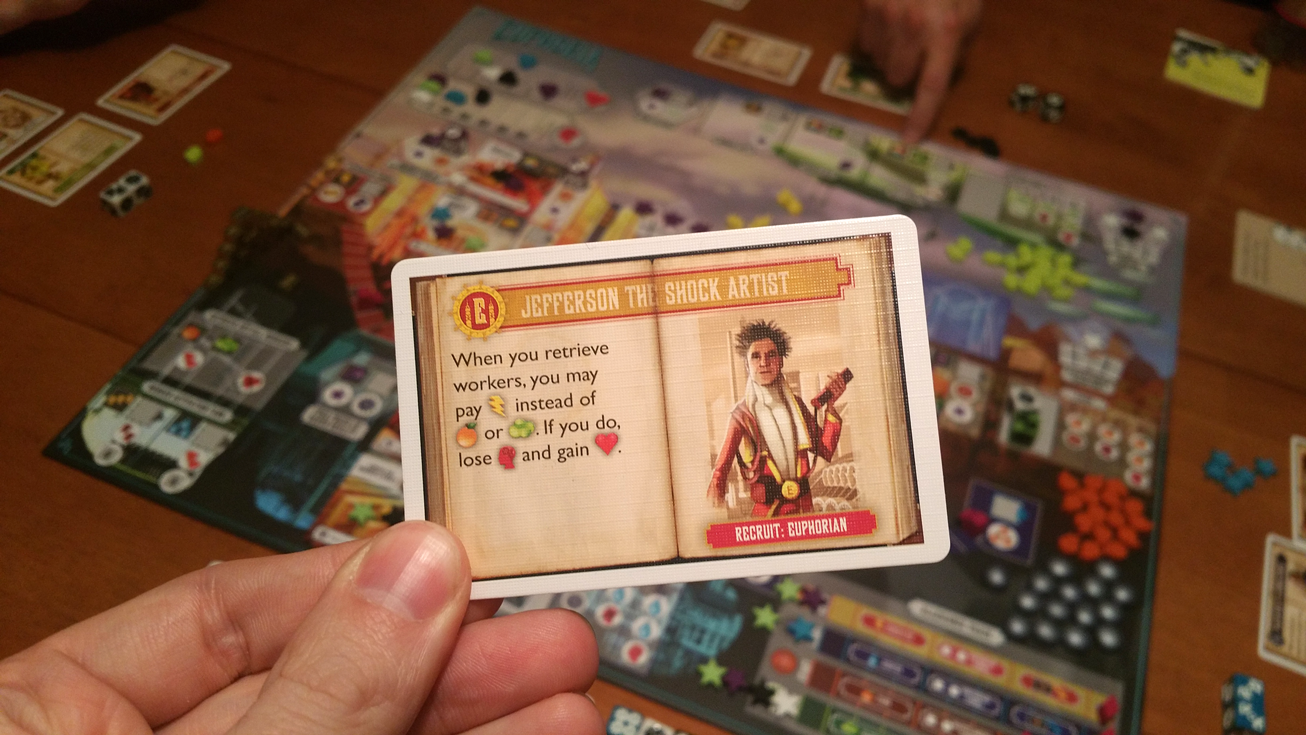 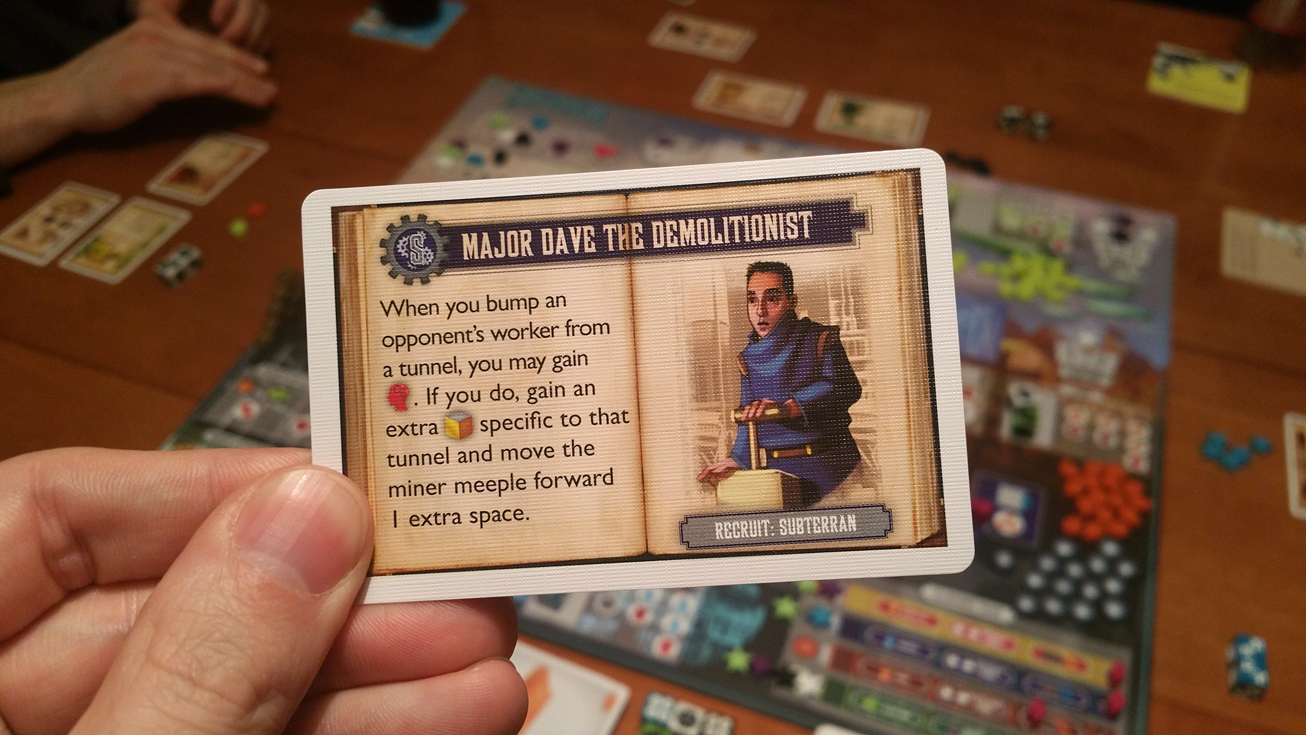 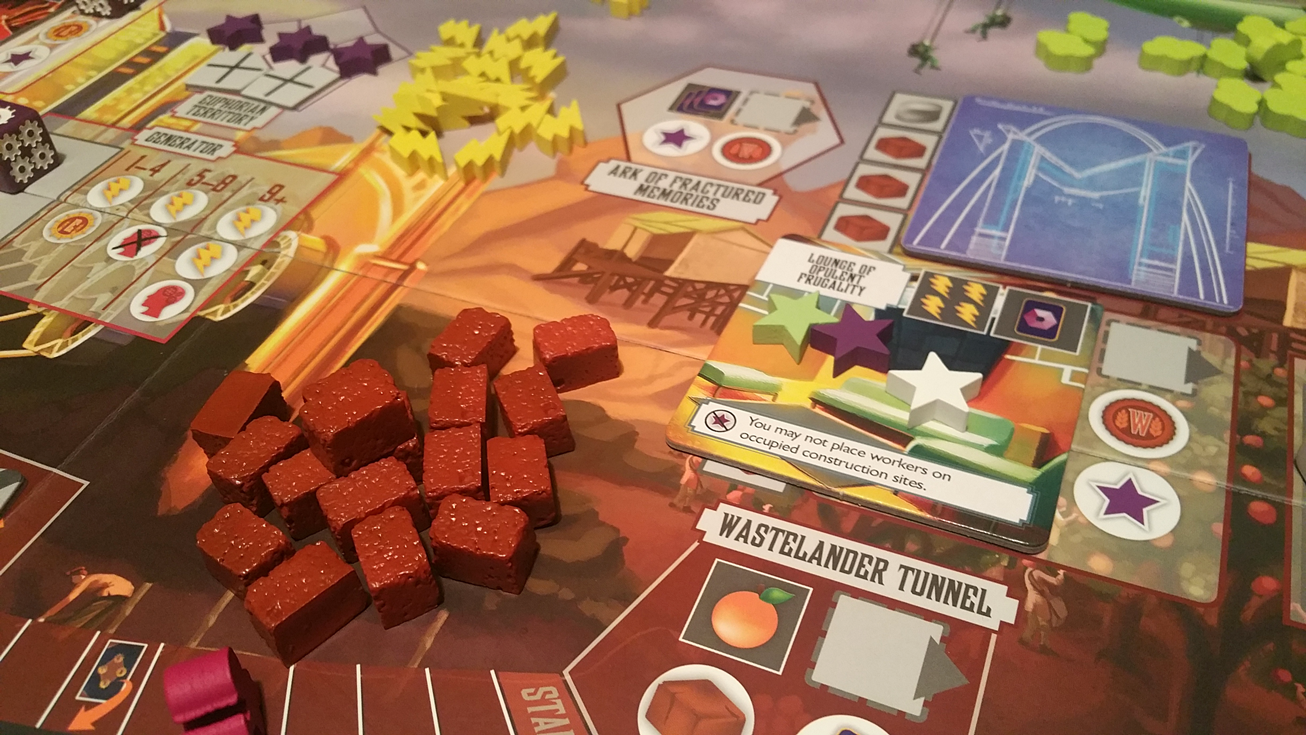 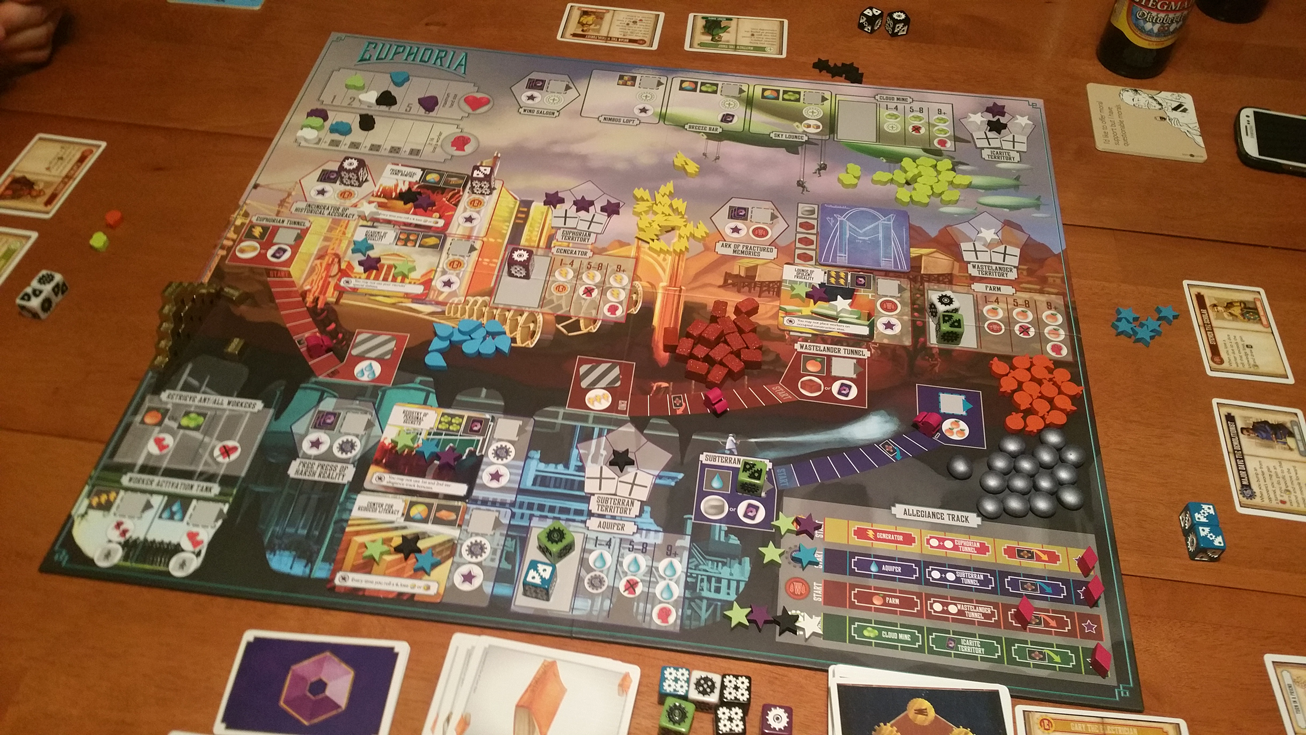 We had a pretty close game. Mike won by dropping his last two authority tokens at once. Alfred had two left, Tom had three, Eric had four, and Anthony had five.

While this was the first play for some of our group, they left intrigued and no doubt thinking about what their strategy might be during their next game of Euphoria—a feeling we feel is synonymous with any solid, fun and well designed game. Consider this our toast to you, Stonemaier Games. Cheers!

Which dystopian fiction would you love to see made into a game? What beer would you drink while playing it?

3 thoughts on “Placate the Masses with Bliss and Beer”