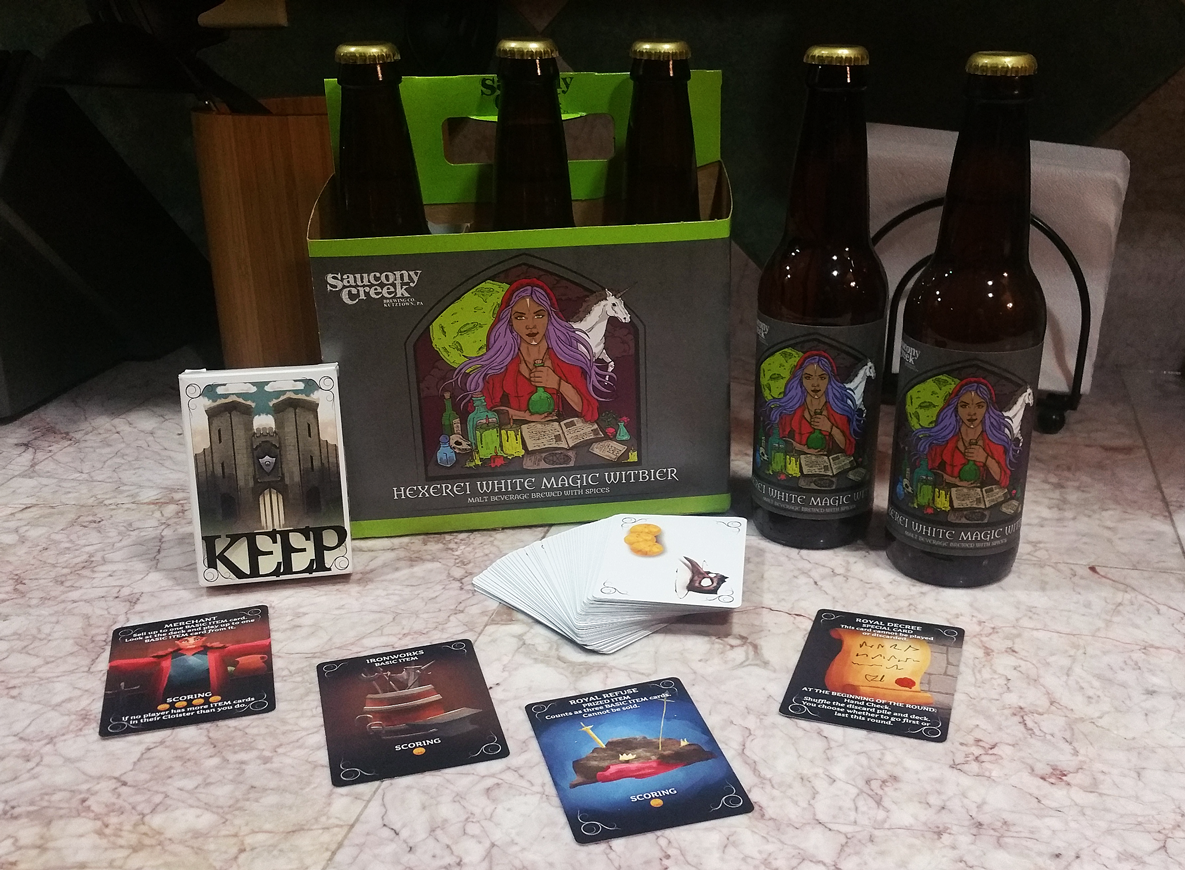 Good game design balances choice—not only in the number of options a player might have, but especially in how meaningful those choices are to the outcome of a game. Some of the best games—at least in our opinion—are the ones in which choice matters enough to make us think twice before we roll the dice, play that card, or move that meeple.

Enter Keep, an unassuming little card game with big choices, perfect for this week’s Game & Beer Pairing. From the initial setup, players are faced with a choice: Which character, out of a given three, will they choose to Keep? After that, which cards to play, and which ones to pass? Do you play a Character face-up and use its instant ability, or face-down and use them for the long game?

Keep, made by Smallbox Games, is a simple drafting game of 56 cards. Play is straightforward; choose a card from your hand, play it, and then pass your hand to the left. Some cards are Items that are played face-up; other cards are Characters that can be played face-up to use their ability, or face-down to use a secret ability that may lend something to your endgame scoring.

It’s a fast game, less than thirty minutes for five players, so we needed a beer as palatable as Keep, and we found that in Hexerei White Magic Witbier by Saucony Creek Brewing Co. If you read our brief explanation about wheat beers in our Dungeon Fighter post, you’ll know that witbier is a lighter, more citrusy brew than its cousin, the weiss.

This wasn’t our first time playing Keep. Like most games, the first time around is apt to be a bit slower as players figure things out. But when you already know the game, man, this one goes quick. With five players, our initial hand size was only six cards—which meant six rounds to form a strategy and implement it—which is not as long as it sounds.

In short, every choice is meaningful in Keep, and you don’t have a lot of time (in terms of rounds) to strategize.

The rules are simple enough to fit on a single sheet, and everything fits into a standard-size tuck box, making this an ideal pocket-size game to bring along to a game night for a quick session (or three!) between longer games.

And while you’re playing a quick session game, it’s ideal to have a decent session beer like Hexerei. This one is brewed practically in our backyard, in nearby Kutztown, PA. At 5% ABV, it goes down easy, but it packs a bit more of a flavor punch than some other session whites that we’ve enjoyed. If you like a smooth commercial white like Blue Moon, give Hexerei a try—it’s more heavily spiced than other whites, with tastes of cloves and coriander adding to the zesty lemon and sweet orange flavors.

One of the things we really like about Keep is that the card backs serve a function in the game other than just decoration; the two symbols on the back and the orientation of the card when face-down tell the other players what it is. A sideways (landscape-oriented) card with the plague doctor mask right-side-up notes a hidden character, while a portrait-oriented card with the gold coins on top notes an Item has been sold, which counts as three Gold at the end of the game.

Endgame scoring is uncomplicated: total your Gold and add any bonuses you may have gotten from characters. Our five-player game was very close—in fact, our scores were 16, 17, 18, 18, and 19, with Alfred ultimately winning by virtue of a character that increased the value of his sold Items.

Therein lies the real dynamic of Keep; other players can see the Items you’ve kept, but not what they mean for the player’s hidden character ability. That means that it’s impossible to tell, even by the final round, where each player stands until scores are tallied.

Keep is a quick and fun game with more strategy than your average pocket-sized game. It’s perfect as an in-between game or for a multi-session game night alongside things like Love Letter and Coup. We recommend Keeping a copy handy.

Keep is one of our favorite drafting games! What are yours?