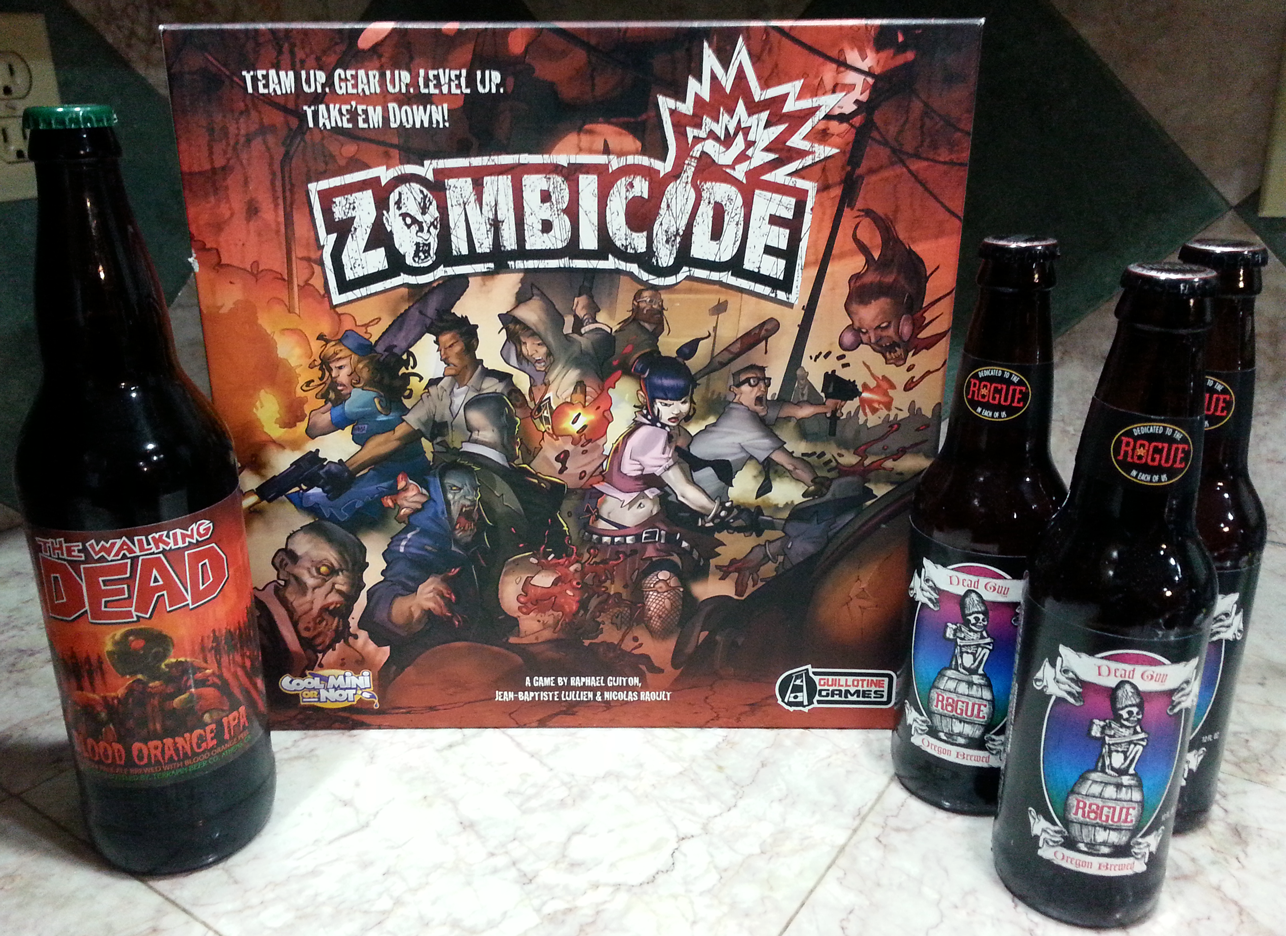 Zombicide (noun) – The deliberate and totally righteous killing of the undead, preferably en masse, with a variety of weapons, including but not limited to chainsaws, shotguns, crowbars, pistols, frying pans, and sometimes, a double-barreled sawed-off with a machete lashed to it.

If you haven’t guessed, for this week’s Game & Beer Pairing we played Zombicide by France-based Guillotine Games. If you’ve ever played the video game Left 4 Dead, this is sort of like the board game version of that.

Think of Zombicide as the “fun uncle” of zombie board games (as opposed to a more somber game like Dead of Winter). It doesn’t take itself too seriously, but is serious fun. There are a metric ton of expansions, sequels and add-ons you can get for Zombicide, but we played with just the base game.

And what do you drink while committing Zombicide? Since it’s the apocalypse, more than one beer was in order. The first was Dead Guy Ale from Portland-based Rogue Ales, a malty German maibock.

The second was Terrapin’s The Walking Dead Blood Orange IPA. We know what you’re thinking—“Walking Dead beer? Isn’t that a little on the nose?” Maybe, but we wanted to try it, and can you name a better time than while playing a zombie game oh wait you can’t yeah we didn’t think so so there.

Spoiler alert: We all died.

We picked a tough scenario, and we were overrun. But that’s one of the things we love about Zombicide—it’s scenario-based, so your goal could be anything from collecting food or water to picking up objective tokens, or just killing a buttload of zombies.

In our scenario, we had to grab six objective tokens and make it to the exit.

Game play is pretty simple, and as a couple of our players noted, fairly similar to an MMO-style game, complete with character leveling that improves your abilities while increasing the difficulty of the game.

Alfred chose Doug as his character, the dual-wielding maniac who is suspiciously reminiscent of Michael Douglas from Falling Down. Unfortunately, even with dual pistols, Doug died pretty quickly as Alfred desperately rolled for a four or higher and came up with nothing but ones and twos.

Mike, who played as samurai Goth chick Amy, managed to mix himself a Molotov cocktail. Even though the Abomination was on the board (and the Molotov is the only way in the base game to kill it), we had bigger fish to fry in the form of an enormous hoard that had gathered at an intersection ahead.

Mike spent three turns luring them closer, and then blasted them all in one go with the Molotov—killing 19 zombies at once and leveling Amy up from blue level to orange level immediately.

From there, things started getting really bad. Ned and Wanda were brutally murdered in a last-stand attempt to kill off a pack of walkers as Amy watched helplessly from across the board. As the last one left alive, she tried valiantly to collect our final three objectives, but alas, she also fell.

As you can tell, Zombicide is a pretty cool game, and there’s a story behind every scenario.

Our zombeers were solid companions (contributions?) to our inevitable demise. Rogue’s Dead Guy Ale is a rich, hoppy lager, amber in color and strong in flavor. If you’ve ever had (and liked) bock or doppelbock, try this one.

Terrapin’s Blood Orange IPA was surprisingly un-bitter; the sweetness of the blood orange peel helped to neutralize the bitterness of the hops and really evened out the flavor in a pleasant way—though bitter was what we deserved after such a heinous loss.

Yet even after being devoured, the guys are still eager to play again—which is a hallmark of a good cooperative game.

What beer would you choose to bring along for the zombie apocalypse?