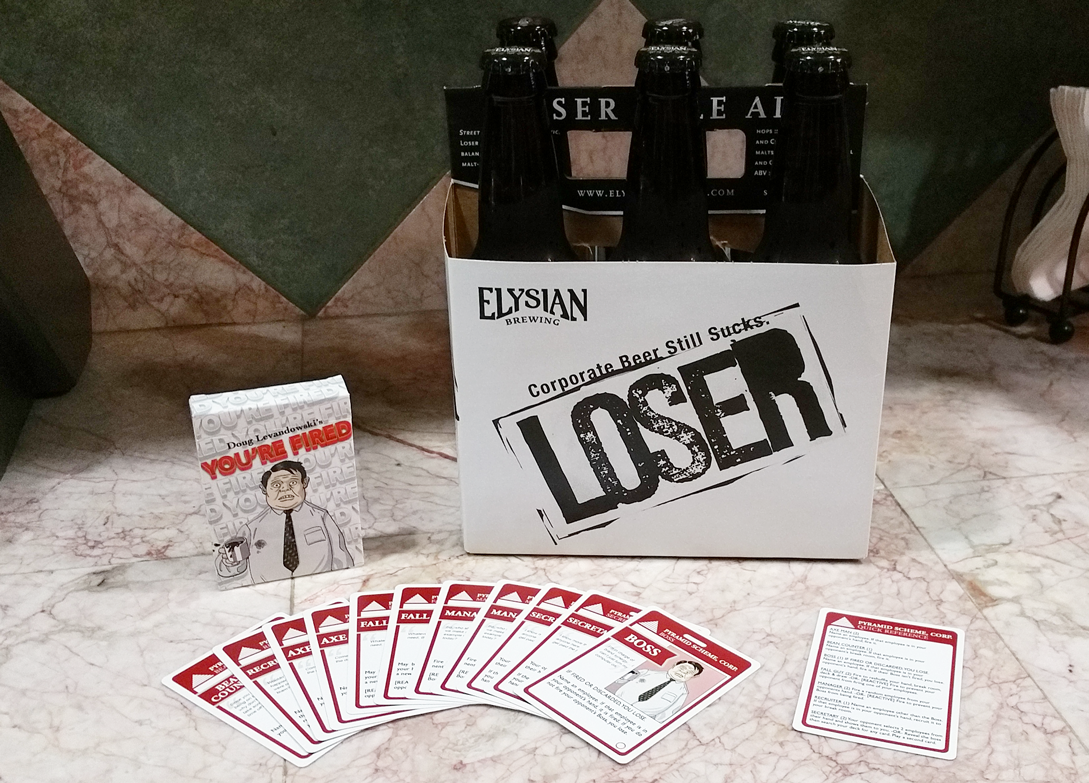 A game doesn’t always have to be sci-fi, fantasy, or some alternate reality to be fun. Sometimes a game can parody, ridicule or downright imitate some aspect of ordinary life and still be pretty awesome.

Case in point: This week we played You’re Fired!, a part-deduction, part-hand management game that lampoons the world of corporate bureaucracy and euphemism.

To win the game, you need to fire your opponent’s Boss, who—in true corporate fashion—appears to be a hapless tin god that has little to no idea what’s actually happening around him.

Who can’t relate to that, right?

Game play is exceedingly simple: On their turn, each player draws a card and plays a card. Everyone starts with a deck of the same 11 employees (think Mission: Red Planet), plus 2 Consultants that give unique, extra abilities.

The original design is for two players, but there are variants for three and four. We opted for the four-player variant, in which two players team up (perhaps there was a merger?) and the object is to fire both of your two opponents’ Bosses (a nice twist to avoid player elimination).

We paired this game with Loser Pale Ale from Elysian Brewing Company. Not because someone who works in an Office Space-esque environment is a loser, but because Elysian clearly announces their anti-conglomerate stance with the words boldly emblazoned across the bottle: “Corporate beer still sucks.”

And since we know the designer, Doug Levandowski, personally (we’re kind of important), we asked him about the theme—why an office environment, and not, say, a monarchy or some other gaming trope?

“The theme was one that my wife actually came up with,” Doug said. “Originally, it was another mob game and I wanted to do something different—but I couldn’t think of anything. I was mulling it over and said, ‘I just don’t know what else there would be where you’re trying to eliminate one person at a time until you get to the main one.’ And without hesitation, she said, ‘Like firing people from an office?’ She’s smarter than I am.”

If you’ve ever worked in a corporate habitat like the one that You’re Fired! spoofs, you’ll find yourself groaning in recognition of the archetypes—like the tan, suave Manager who looks like the kind of guy that would give pep talks about synergy and squeezes your shoulder when you really don’t want to be touched. Or the puka-shell-sporting Motivational Speaker, who comes in to remind everyone with his big toothy smile that “there’s no ‘I’ in ‘team’!”

The game plays quickly—with two players, we’re talking 10 minutes. With four players it took about 25 minutes, including a rules explanation. Playing the four-player variant, we had two teams of two—Alfred and Anthony against Mike and Tom.

Since everyone has mostly the same deck, strategy all comes down to what cards you draw and when… and hoping that your Boss stays safely within your deck. Once he’s in your hand, he can be targeted by the other players, whether they know he’s there or not (hence the deduction part of the game).

While it may have been thematically appropriate for us to sip a bitter beer for a game like this one, the Loser Pale Ale was all but; it was surprisingly bite-less at only 53 IBUs. (If you read our Yardmaster Express post, you know this is pretty low on the bitterness scale for a pale ale.)

Instead, the citrus flavors really stand out, primarily orange with some tropical notes. At 7% ABV, it’s a bit heavier than most pale ales, but lighter on taste. We’d daresay it might be a perfect beer to pacify yourself after a hard day of groveling at the office, so long as you can ignore the huge “LOSER” stamp across the bottle and avoid questioning your life choices and how it all came to this.

For us, it all came down to a single round and one Boss left on either side. It was common knowledge by then that Tom’s Boss was in his hand, and that Anthony’s sole card was his Boss. But Tom played a Motivational Speaker to keep his employees from being fired for one round, and Anthony’s Boss was summarily given his walking papers.

[Author’s note: It’s almost impossible to play this game without spoofing any of the various characters that have used the game’s namesake as a catchphrase over the years. For us, it came down to either a subdued, Trump-esque “You’re fired,” or a bombastically melodramatic Cosmo Spacely impression. From “The Jetsons”? Remember? No?]

What was your “gateway” craft beer?