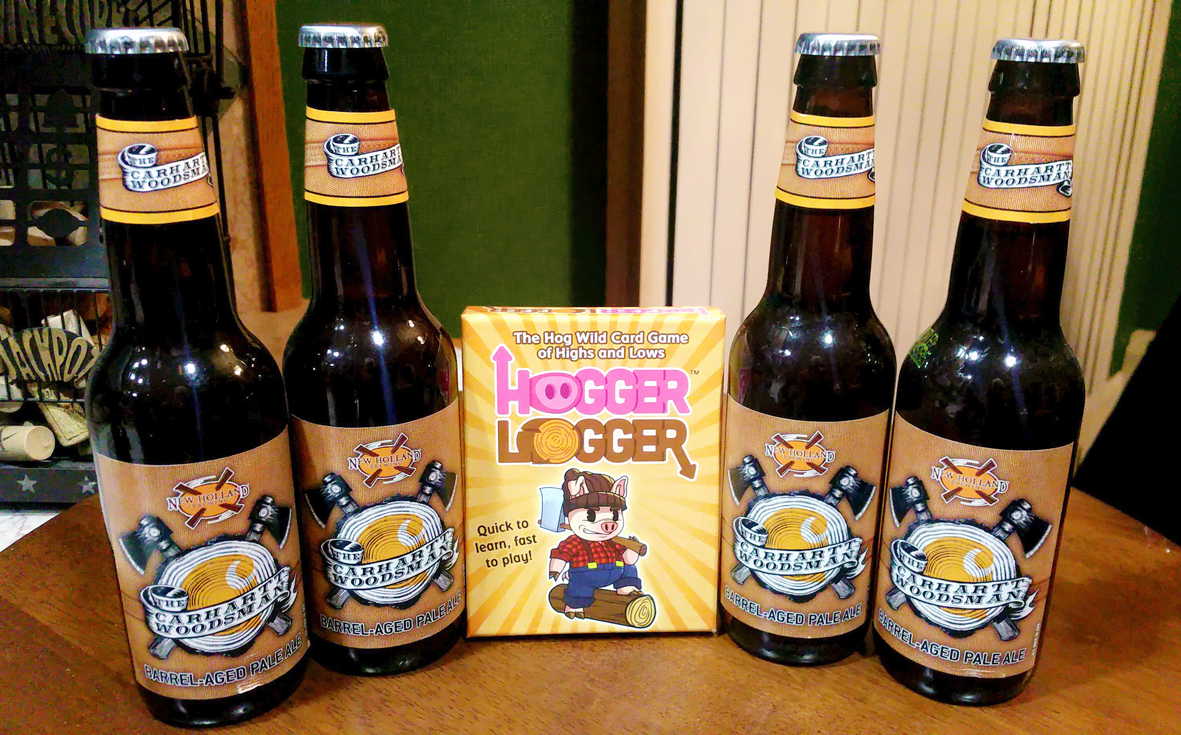 For this week’s Game & Beer Pairing, we chose a game that holds a special place on our shelf. We got to see Hogger Logger develop in various ways over a period of about two years before it successfully Kickstartered in 2014. We’ve come to call the designers friends (and even got a private close-up magic show from one of them).

Some call Hogger Logger a party game, but that’s not really a fair classification—it’s part push-your-luck, part take-that, part card game, and part numbers game. The concept is super simple: The active player has to guess whether the next face-down card in a river is higher or lower than the current showing card. Any player can play a new number to try to increase or decrease their odds of guessing correctly, and Action cards are played to draw new cards or slightly alter a rule.

We partnered this game with New Holland Brewing’s Carhartt Woodsman Barrel-Aged Pale Ale—quite a mouthful. (We would’ve gone with a bacon-flavored beer in honor of the game’s mascot, Pork Chopper* the lumberjack pig, but we were concerned that would elicit a call from PETA. Also, we couldn’t find one in season.)

Oh, and Hogger Logger is the only game that we know of since the 90s to have its own theme song. Give it a listen

Even though this is a blog about games and beer, Hogger Logger is not exactly amenable to bottles or glasses on the table—arms and elbows tend to fly as cards are played in rapid succession, so we made sure to keep the Woodsman out of the path of aggressive appendages—it was too good a beer to waste (but we’ll get to that in a moment).

Setup and instruction takes less than five minutes, and then you’re off to the races. Hogger Logger is played in rounds, with the winner of each gaining a Victory card. The win condition is to collect a number of Victory cards commensurate to the number of players.

It’s a pretty fast-paced game within rounds, so we felt that a decent session beer was in order. The Carhartt Woodsman was exactly that—a smooth pale ale that was light on bitterness and had a tinge of malty sweetness. (Minor tangent: “Session beer” does not mean “low on flavor,” as many tend to believe. A true session beer is highly drinkable and lower than 5% in ABV, so that multiple beers can be enjoyed fairly quickly without getting you sloppy. Also, Eric likes them a lot.)

Since we had five players, we played to two Victory cards—which means that technically the game could have been over in two rounds, but it took us a total of four, since Mike, Tom and Alfred each gained a Victory card before Tom got his second. In fact, at one point Mike left us all flabbergasted by calling lower on an 8, and then immediately calling “it’s a four” just before we flipped—yes—a four.

Hogger Logger (which, by the way, is not a nonsensical name—it’s derived from Swedish, believe it or not) is a card-chucking good time. We’ve played this game a whole bunch of times with various groups, and haven’t yet found anyone who didn’t enjoy it—even seasoned gamers get into the groove, and it’s hard not to grin when someone guess “Logger” (lower) on a 14 and a 15 shows up.

But that’s part of the game; it’s a blend of luck and strategy, with the former playing a slightly bigger part in the outcome than the latter.

We can’t help but think that Pork Chopper himself would enjoy the Carhartt Woodsman, barrel-aged and crafted with American hops. It’s a fairly new beer, having come to the scene in 2014. The “barrel-aged” part is exactly how it sounds; the beer is aged in a barrel post-brewing. This infuses it with flavor of whatever wood the barrel is made from or, if previously used, whatever wine or spirit the barrel was used for. In this case, it gave the beer a mild oaky flavor.

And it was well done. Alfred, the home-brewer of the group, was reminded of one of his brews, noting that the oak toned down the bitter and turned up the character. Tom enjoyed how the barrel-aging had “darkened” the pale ale’s flavor. Eric belched (a high compliment in it’s own right).

The guys all really enjoyed Hogger Logger, and when asked post-game what he thought, Alfred noted coyly, “It has its ups and downs.” Well played.

*So you may have noticed the asterisk above in reference to Hogger Logger’s mascot, Pork Chopper. Once upon a gaming convention, the creators held a contest to name their mascot. Anthony suggested “Pork Bunyan,” yet ultimately “Pork Chopper” was deemed the winner. He hasn’t quite gotten over it.