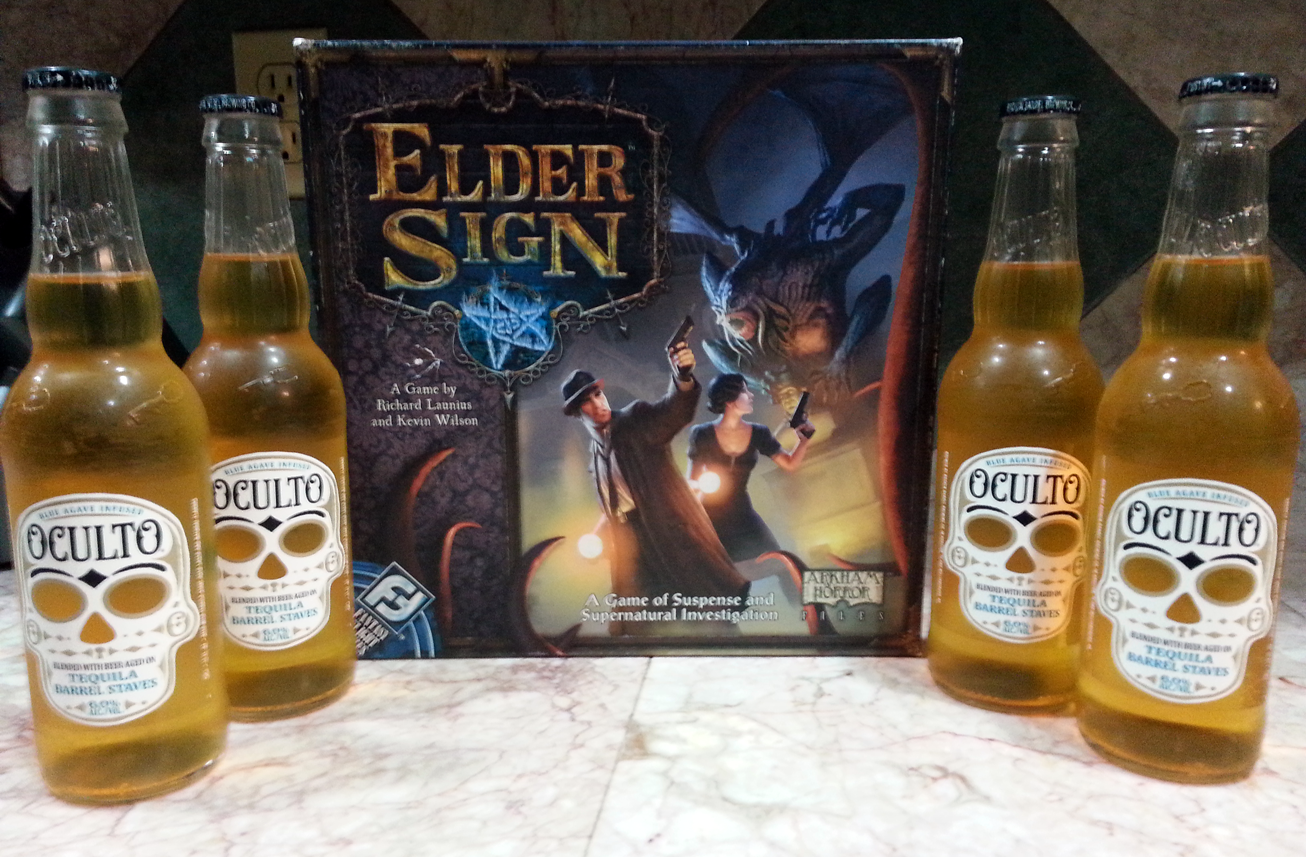 Much like pirates, zombies and wizards before it, Cthulhu has carved out an angry-god-sized niche in the world of tabletop gaming. In an effort to keep darkness and terror from descending upon the planet, we paid homage to the Tentacled One in this week’s Game & Beer Pairing.

In Elder Sign, players are noir-ish investigators exploring the Arkham museum, and because a museum at night isn’t weird or creepy enough, there’s all sorts of bad juju going on here—chief among them otherworldly doors to alternate realms through which an evil ancient deity might slither. Simply fascinating!

In Fantasy Flight Games’ 2011 release, players choose a room in the museum (usually one in which you’re least likely to die and/or go insane), roll dice to try to meet the room’s conditions, use Items and Spells to help them out, and collect Elder Signs—glowing pentagram thingies that somehow stop the Ancient One from slinging chaos, death and slime all over our world. (There’s always slime. Why is there always slime?)

And because this game is all about the occult, we thought it only right to pair this with Oculto, a tequila-flavored beer infused with blue agave made by Broken Barrel Brewing Co. of Missouri.

Setup takes a few minutes, but Elder Sign is a little different from the typical Lovecraftian game. Many of the other serious Cthulhu games that we’ve played tend to be board-based and component-heavy (see Mansions of Madness, Arkham Horror), and while this one has plenty of little bits and pieces, it’s almost entirely card-based—but still maintains an impressive presence on the table.

Elder Sign is not for everyone. Its primary mechanic is dice-rolling, which is ultimately probability-based (luck, essentially), which can be super frustrating. Many times it happened that someone was only one die face away from completing a room and just couldn’t get it done.

One of our players, Alfred, used up four Clue tokens (each time shouting, “I’m using a foot!”) on one turn, allowing him to keep the dice he wanted and to reroll for the right dice combination with the remaining dice, and still didn’t get it. Luckily the table was not flipped; we could see how Elder Sign, while fun, could be a rage-quit kind of game.

But on the other hand, it’s cooperative, so despite down-time, the game stays interesting for other players. We’ve got a good group, so we kept it light—with lots of profanity, cheering, and beer.

Speaking of beer, Oculto is a fairly new one on the scene, having just been released in spring of 2015. It says right on the label that it is “blended with beer aged on tequila barrel staves,” which is a fancy way of saying it has a tequila scent, and a hint of tequila flavor, but alas—Oculto does not actually contain tequila.

Oculto is infused with blue agave, which gives its unique and sweet, syrupy sort of taste. Even though it’s brewed in the US, it seems like a bid by Anheuser-Busch (who owns the craft brewery that makes it) to get in on the growing Mexican beer market. We’ve see a lot of bad press about Oculto, but we enjoyed it. Hey, to each their own. (at least it’s not Braaaiins!)

In the end, no one died or went insane in Elder Sign—though both Mike and Eric got dangerously close, with just one Sanity to their names at a couple points in the game.

If you’re interested in Elder Sign, it’s definitely got replayability—based on the combinations of rooms that are revealed, the Mythos cards that come out, and the Ancient One (aka, “Boss Monster”), the game is going to be different each time you play it. This time around, we found, was a bit tamer than a couple previous tries. Yet at its heart is that dice-rolling mechanic; much like Oculto, if you don’t think it’s for you, you should still try it once, if for no other reason than to make yourself a little worldlier.

We didn’t end up having to fight ol’ Hastur, the big nasty in our game, since we collected the necessary Elder Signs before he awoke. We plowed through rooms, saved the museum, and gave that slimy deity the finger on our way out, but not before buying a postcard from the creepy gift shop that sells… wait, Elder Signs??!

Of all the Cthulhu Mythos games, which ones do you prefer? Barrel aging is all the rage lately in craft brewing—what ones have you tried and liked?