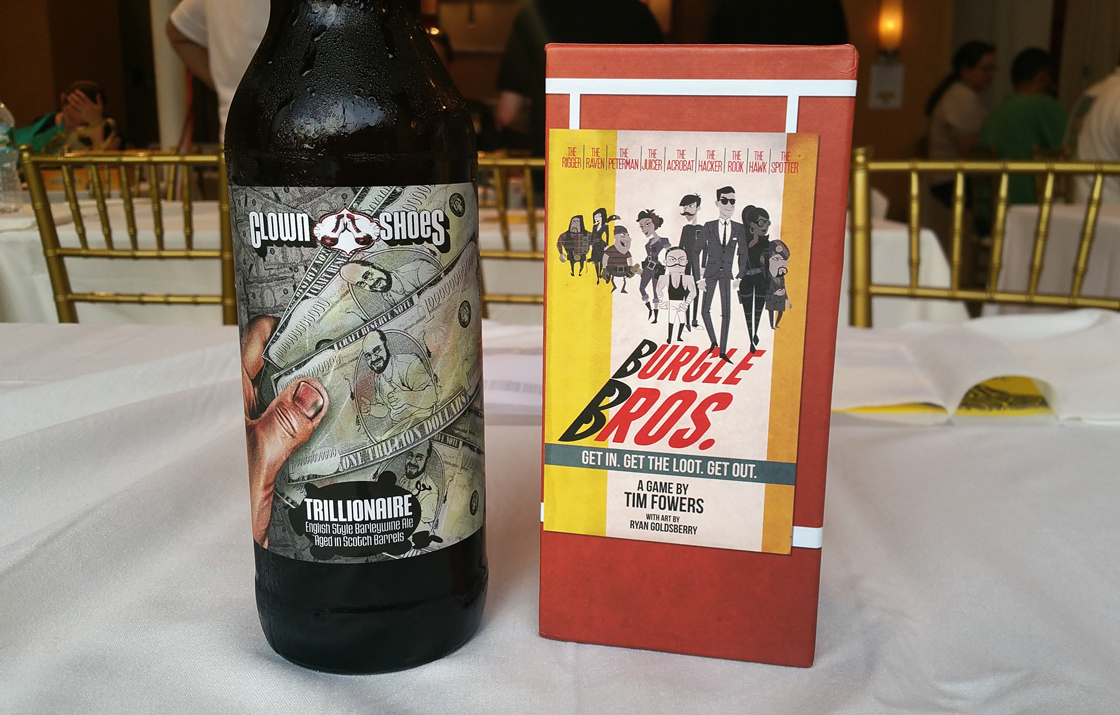 We recently traveled to Dexcon, an annual five-day convention in Morristown, NJ, where we played all sorts of games, and definitely drank all kinds of beers, but prominent among them was one of each that we decided to use for this week’s special-edition Game & Beer Pairing, straight from Dexcon 19.

For months we’ve been hearing, “You guys have to play Burgle Bros. It’s soooo good.” Typically, we groan when people say that. Liking or disliking a game is in the eye of the beholder, and I might think it sucks. Just sayin’.

Spoiler alert: This game does not suck. And you have to play it. It’s soooo good.

Burgle Bros. is a cooperative game in which one to four players assume the roles of thieves, each with a specialty. Think Ocean’s Eleven, witty banter not included. Each turn, a player performs a number of actions, like moving, peeking, or attempting to crack a safe, and then the guard(s) moves, which can result in a loss of stealth (or the loss of the game, if you’re out of stealth tokens) with the ultimate goal of cracking three safes, one on each of three floors, and then getting to the helipad.

We sat down to play this with two of our favorite people in the gaming industry: Herb Ferman, part of the duo that runs the tabletop blog Game and a Curry, and Gil Hova, designer of The Networks, Bad Medicine, and other cool games (not to mention that both of these gentlemen playtest just about everything we make).

Since the purpose of Burgle Bros. is to steal stuff, presumably stuff that will make us rich beyond our wildest dreams, we chose to pair this with Trillionaire, a barleywine style by Massachusetts-based brewery Clown Shoes. We love their unique flavors so much that this is our second Clown Shoes beer pairing (the other being Galactica, an IPA that we paired with Sentinel Tactics).

This beer was made as a limited edition, only brewed once, and it’s so new it hasn’t made it onto their website at the time of this writing. But trust us; it’s out there, and if you see it, snatch it up before it’s gone! 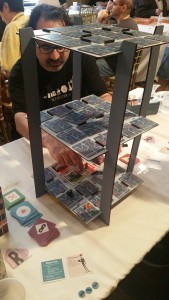 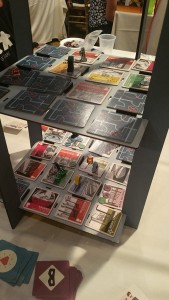 We should mention, before we get into anything, that our photos show a tiered 3D board, which was an add-on during the Kickstarter campaign and does not come with the base game. Ordinarily, the three floors of the game would be laid out side-by-side on a table. However, there is a Deluxe Burgle Tower made by Daft Concepts and sanctioned by Burgle Bros. If you think you’ll be playing this game as much as we will, it’s probably worth the cost.

Honestly, we have no idea how they fit so much awesomeness into a box as small as Burgle Bros. The packaging (which is very creative, by the way, made to look like a high-rise building) is quite small, all things considered.

The game itself reminded us a bit of another co-op game that we enjoy quite a bit—if Forbidden Island was the mild-mannered Dr. Banner, then Burgle Bros. would be the Incredible Hulk. The art and theme are light and humorous, which is good, because the game can get quite tense.

The style of play will appeal to all types. Casual gamers will appreciate how easy it is to learn (there are four actions you can take on your turn, and the room tiles dictate what happens when you enter them). Hobbyists will enjoy the high strategy and plotting required to win.

While Gil tended to be cautious, peeking into rooms and steering well clear of the guard, Eric’s strategy was to make a mad dash through rooms and hope for the best… which actually worked out pretty well for us, since he was the Hacker, and could get through certain types of alarms without tripping them.

On each floor, players need to find (and crack) the safe, and also find the stairs that lead to the next floor. In our game, we managed to loot the first-floor safe, thanks to Herb’s safe-cracking character, while Eric scurried around the second floor and uncovered both the safe and the stairs.

Alas, the guards were crafty. Although their movement is forecasted at least one turn ahead, the random positioning of walls during setup made it impossible for us to avoid them for long, and once a single player loses all of their stealth tokens, the game is lost. Herb managed to open our first safe, but was caught before he could join the rest of us on the second floor (even though Gil nobly returned to try to rescue him).

We lost. Were not good enough thieves to become trillionaires, but we still enjoyed some Trillionaire. Seriously—you can’t see my face, but it is my serious face—this is the best barleywine we’ve ever had. The fact that it’s a limited run makes us terribly sad. 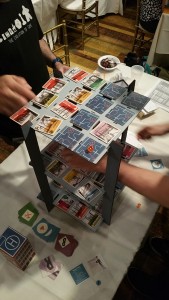 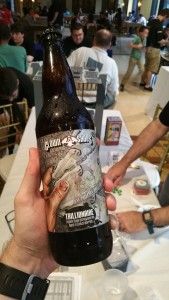 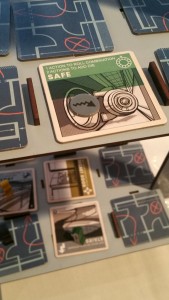 Don’t let the style fool you; barleywine is indeed a beer, and is usually a very strong beer. Barrel-aging can yield some intense flavors, but Trillionaire balances them well. The color is reminiscent of scotch, with a similar smell that doesn’t overpower. The taste is a bit of vanilla, a bit smoky, and a bit sweet with a scotch finish. All in all, it’s a superbly smooth beer that we would recommend to anyone that enjoys barleywine, scotch, or even a good, hard stout. This was one of our more perfect pairings, because we have nothing but good things to say about both Burgle Bros. and Trillionaire. If you get the chance to try either, do it. If you get the chance to try them together, you’re welcome.

What games have you played in “3 dimensions”?