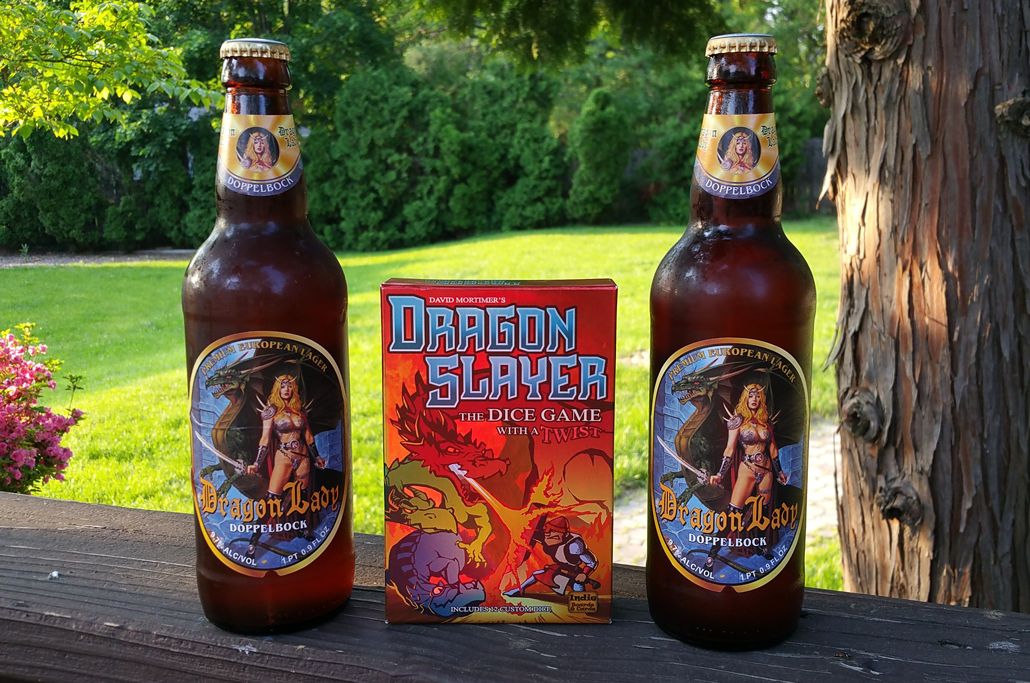 Even as game designers, we’re constantly impressed by the creative ways in which dice are used in games. Far gone are the days of “roll dice, move X spaces” (or worse… Yahtzee!).

Dice games have become a staple in our collections—they’re usually easy to learn, quick to play, and very portable.They tend to be luck-based (by the nature of dice), but as long as that kind of thing doesn’t bother you, they can be a lot of fun.

Dragon Slayer by Indie Boards & Cards is no exception. It’s a small-box dice game in which each player is a knight vying to slay more dragons than anyone else. Each dragon is assigned a difficulty and points for killing it, and players can push their luck by deciding, each time they successfully slay, to continue on to another dragon.

As long as the player has at least one die remaining with which to slay dragons—which are removed by being fire-blasted and lacking a shield—they can continue. First to 40 points triggers the endgame, and all players get an equal number of turns. See? Easy.

We paired this game with Dragon Lady, a doppelbock brewed in Lithuania. It’s unclear by the label art if the Dragon Lady is friends with the dragons, or captures dragons, or kills dragons; all we know for sure is that at 9.7% ABV, she’s one tough customer.

We played a three-player game, though it accommodates up to five. In the first round, Anthony decided to play it safe, going for the two easiest dragons and stopping there. Arielle went straight for the toughest dragon, and unfortunately, was fire-blasted before she could score.

Then Eric went on a berserker streak and successfully killed five dragons, prompting a lot of questions. Where exactly are we that there are so many dragons around to slay? And why do we hate dragons so much? Was this before there was an endangered species list? Is this game why there are no more dragons?

Alas, our questions were not answered, and were in fact soon forgotten, thanks to the Dragon Lady. She’s a cruel mistress; a smooth copper doppelbock that balances dark citrus notes with malty sweetness well. Dragon Lady comes in a 16.9 oz. bottle, which means that by the time you finish one you won’t be able to pronounce its home brewery, Rinkuskiai (if you even could to begin with).

We split two bottles of Dragon Lady between the three of us, averaging nearly the expected 12 ounces and still feeling pretty good by game’s end. Eric maintained his early lead and eventually won, landing a straight 40, while Anthony scored 24, and Arielle, 16.

Overall, Dragon Slayer is very much a luck-based game; there are few decisions to make, other than to continue on or stop, or to challenge. Once per game, each player can throw a challenge marker to prompt another player to keep going; decline, and lose half your points. Accept, and all new dragons killed are worth double. Timing is integral, evidenced by Eric’s third-round win thanks to a poorly-timed challenge. Even so, it’s a fun, quick game, good for all ages.

To our knowledge, no dragons were harmed in the making of this game.

Sound off with your go-to dice game below!