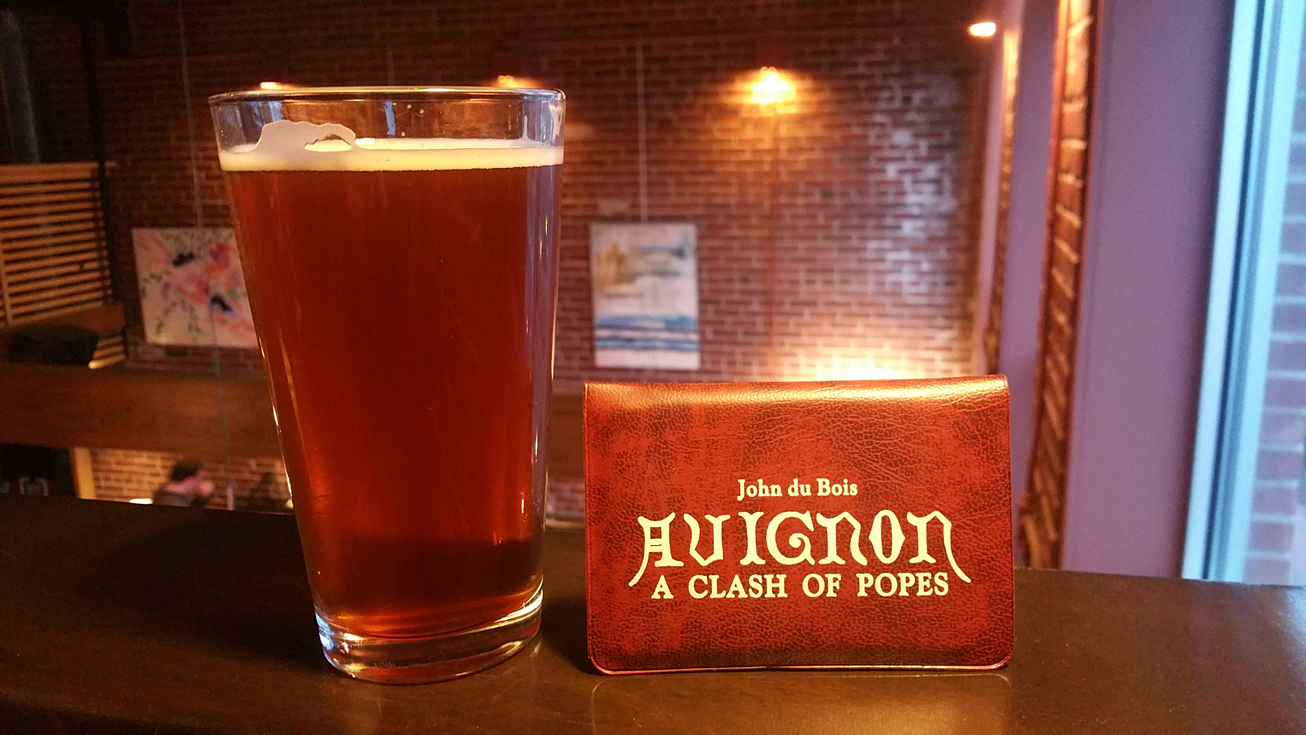 We recently attended the inaugural Northeast Nerd Night, a soon-to-be regular evening of gaming and beer in the name of charity, held at Triumph Brewing Company in New Hope, PA. This month, we gathered in support of Fisherman’s Mark, a locally-based grassroots social service agency. The turnout was great, the games were a blast and the beer was delicious!

And since we were already playing games with beers in hand, we figured we’d do an on-location Game & Beer Pairing at the brewery with a Triumph draft.

We chose Avignon: A Clash of Popes, a two-player wallet game designed by John du Bois (@JohnduBois) and published by Button Shy Games. What’s a wallet game, you ask? Simply put, it’s a micro-game packaged in a slim vinyl wallet. They’re tiny (usually 24 cards or fewer), and slip into a pocket easier than a deck or box.

The best part about the wallet games, particularly Button Shy’s lineup (which currently includes eight different games) is that they are simple yet fun; they take minutes to learn and set up, and usually play in fifteen to thirty.

Avignon: A Clash of Popes is only eighteen cards, so there’s some room left over in the wallet for a mini-expansion. For this pairing, though, we played with the base game.

Here’s a quick history lesson for you: Once upon a time, in the fourteenth century, a series of popes were like, “We’re French, so we’re not moving to Rome. We’re gonna chill in Avignon.” And Rome was like, “You can’t do that,” and the French popes were like, “…Screw you, we’re doing it.”

In this game, each player is a candidate for pope* who is vying to move the papacy to their city of choice, either Rome or Avignon, depending on which side of the table you’re sitting on.

If that sounds complicated… it’s not, we promise. There are only four actions you can take; you can beseech (pull a character one city closer to you), chastise (push ‘em one city away), excommunicate (discard and replace a character), or petition them (use their special ability).

You take two actions, you can’t do the same thing twice, and you can’t mirror your opponent’s last turn, lest you get stuck in an infinite time loop that results in there being no pope and Rome being sold to Germany and made into one giant pizzeria. Or something like that.

Anyway. For our beer, we chose Triumph Brewing Company’s Belgian Dubbel, which is a stronger version of a brown ale first brewed by Trappist monks in the mid-nineteenth century.

In Avignon: A Clash of Popes, two popes enter, one pope leaves! To win the game, all that one potential-pope has to do is get three characters to their city.

So we banished him from the church too. Peasants. Who needs ‘em, right?

Out came an Inquisitor, who shifted the game quickly. His petition ability is pretty strong and allowed us to tie up the game two to two. Then Eric put the game in check by having two characters only one space away from his city. With no available moves other than to delay his defeat, Anthony conceded, and the stubborn pope remained in Avignon.

The Belgian Dubbel is one of Triumph Brewing Company’s strongest beers, not just in ABV (at 7.4%), but also in flavor, and we can safely make that assumption because we tried all they had to offer save for a weiss, which we’ll make sure to get next time (and make no mistake—their other beers were delicious as well).

Triumph’s Dubbel pours a deep, hazy copper, not as dark as some other dubbels. The taste is sweet without being overly so, with caramel malts shining through. It was not just our favorite of their brews, but most of the other attendees at Nerd Night’s favorite as well.

We’ve done pairings on a lot of small, portable games, and all of them have been awesome, but we have to admit that Avignon surprised us. We weren’t expecting much out an eighteen-card game, but it requires a good deal of strategy and thought. We could easily see this one rivaling something like Love Letter as a perennial favorite quick in-between game.

What are your favorite pub games?

About Avignon: A Clash of Popes