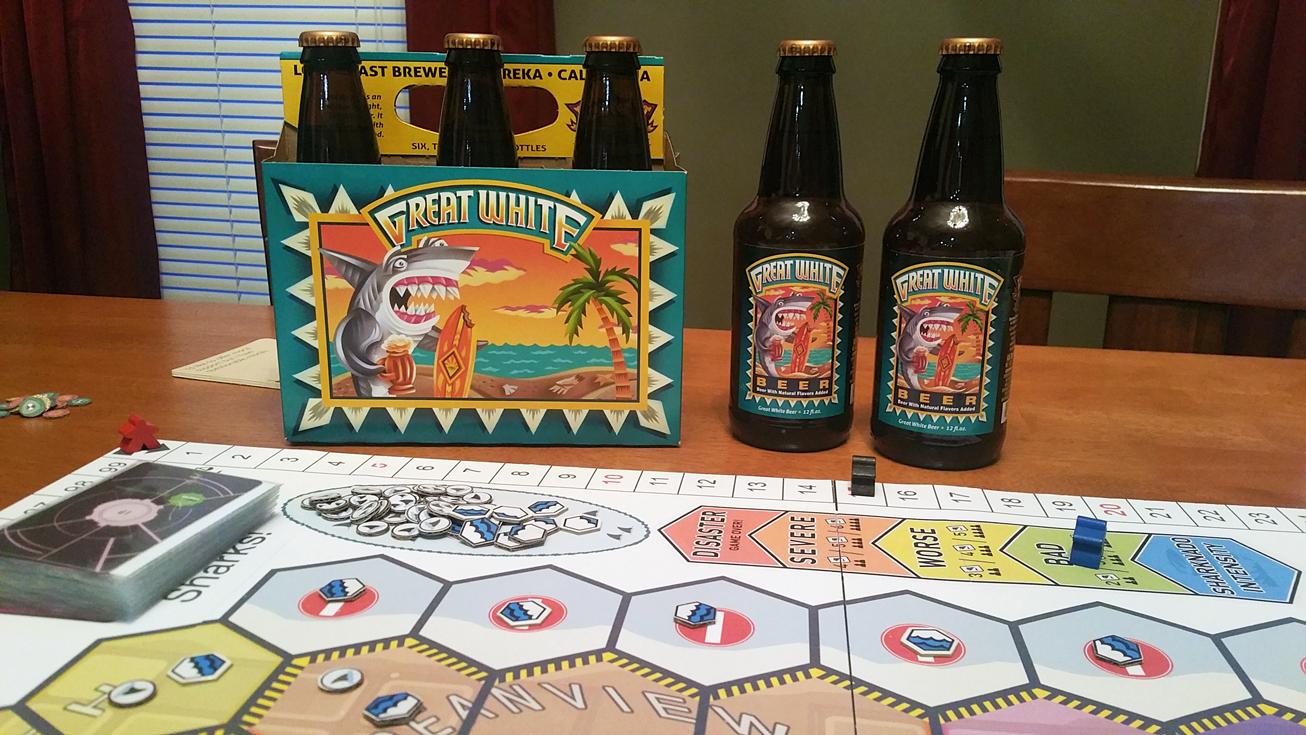 If you’ve been following us on social media or here on Boards & Lager, then you know that we are making the official Sharknado™ board game, tentatively (and transparently) titled Sharknado™: The Board Game! And we’ve been playtesting like crazy.

Recently we took a trip to our local beer distributor and found a whole bunch of shark-themed beers (seriously, there were at least six). What to do? It only seemed right to grab some up and do our first Prototype Pairing.

Why do a pairing for a prototype, you may ask? Well, first off, because we wanted to give our readers some insight into how the game is progressing. Second, because we wanted an excuse to drink a shark-themed beer. And lastly, because we’re somewhat narcissistic and this seemed preferable to posting mirror selfies of ourselves with duck-faces.

We paired this game with Great White, a witbier from Lost Coast Brewery. We recently had another Lost Coast beer with our Schrödinger’s Cats pairing, and it was pretty great, so we took a chance on another of theirs. (They actually make two shark beers, so eventually we’ll get around to the other.)

We chose this one, out of the several shark beers we picked up, because the freakin’ Great White in the Sharknado™ game is always giving us problems.

First things first: For the sake of this post, we’re going to focus more on the storytelling element than the details of the mechanics. Suffice it to say that play is fairly simple, but strategy is a bit more involved.

The scenario we played required that we (a) save the engineer (who we have affectionately dubbed “Hard Hat Harry”) who went missing in the Business District. Then (b) bring him to the North Side Tower, and (c) Defend Harry while he rigs a Freon tank to blow up, thus freezing the Sharknado and saving our city.

The odds weren’t exactly in our favor.

But before we get to what went down, let’s talk about the Great White—the beer, not the shark that perennially bites our arms off. It’s unique for a witbier in that the citrus flavor is stronger than the wheat, primarily orange and lemon notes that give it a good scent and a solid flavor. The hops come through mildly, with a semi-sweet aftertaste. Overall it’s very smooth; if you like lighter beers, like summer wheats, you should give this one a try.

So as we were sipping Great White and feeling optimistic about the game, we began to strategize. We’ve already outlined what was supposed to happen. Here’s what actually happened:

Things started off well, but searching the city for equipment wasn’t yielding a lot of good weapons. On top of that, there were a lot of citizens that needed saving, and that’s kind of a pain in the rear. (Saving citizens is randomized, and can do good things for you—but is also a detriment if you fail.)

With a serious lack of weapons, Eric’s character died in the first round—poor soul got her head bit clean off—and Alfred lost a leg in the same surprise shark fight. (But since this game is not player elimination, Eric came back as a new character at the beginning of the next round.)

As we made our way toward the Business District, the Sharknado (thankfully) kept its distance, but kept hurling sharks in our direction, which made wounds more severe and slowed us down quite a bit.

Andy found himself alone in a fight against three sharks, and survived solely by virtue of throwing a cheerleader, a citizen he had recently saved, at a shark. (Not kidding here, folks. Survival of the fittest.)

Finally, when everyone was in the Business District searching for Hard Hat Harry, we drew pretty much the worst Sharknado card we could at that moment—the Rain of Sharks, which does exactly what you’d expect it to do—and it immediately killed Mike and Andy. Eric and Alfred found themselves in a fight, and Eric’s second character was outright devoured by the ambush.

Alfred, alone against a trio of hungry predators, did his very best to stave them off—in fact, it all came down to the roll of a single die—but he was bit and succumbed to the sweet release of death.

It’s actually kind of funny that we lost the game on the evening we decided to do this pairing, but at least we had the Great White in which to drown our sorrows. Luckily it’s only 4.8% ABV, because we had plenty to be sorry about. 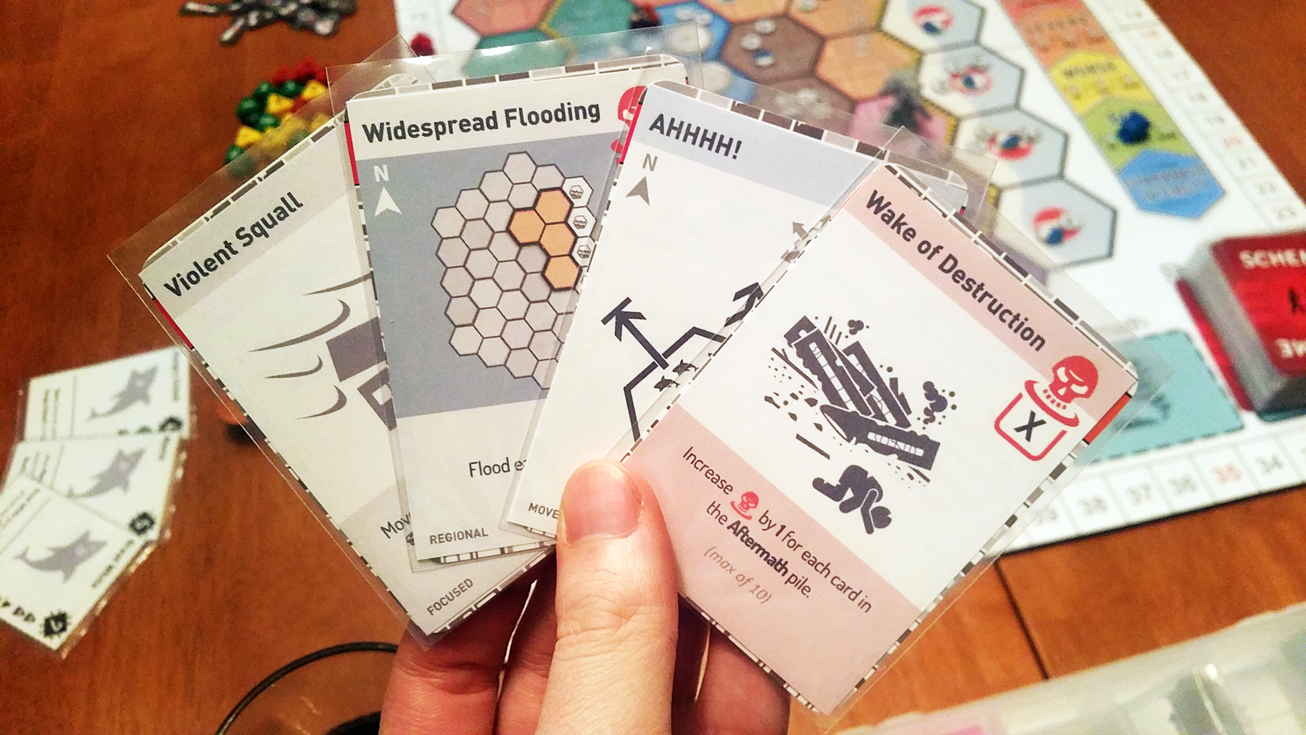 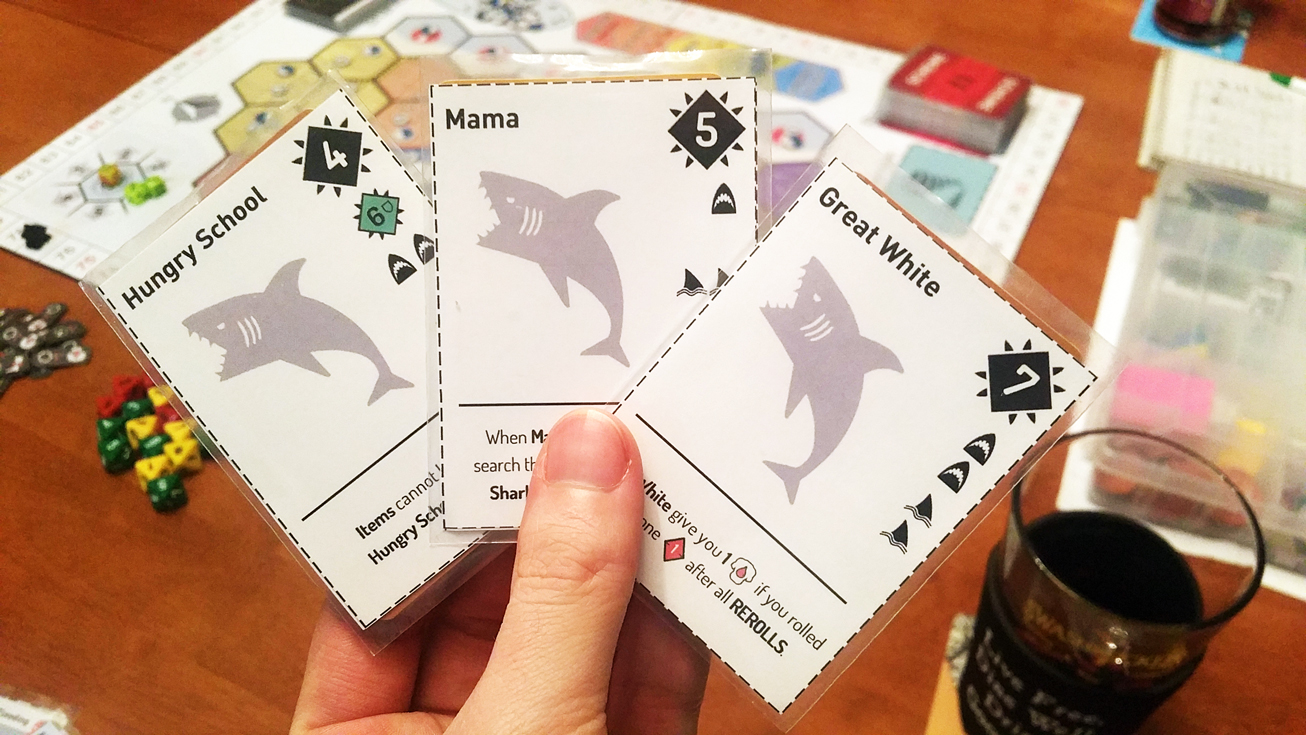 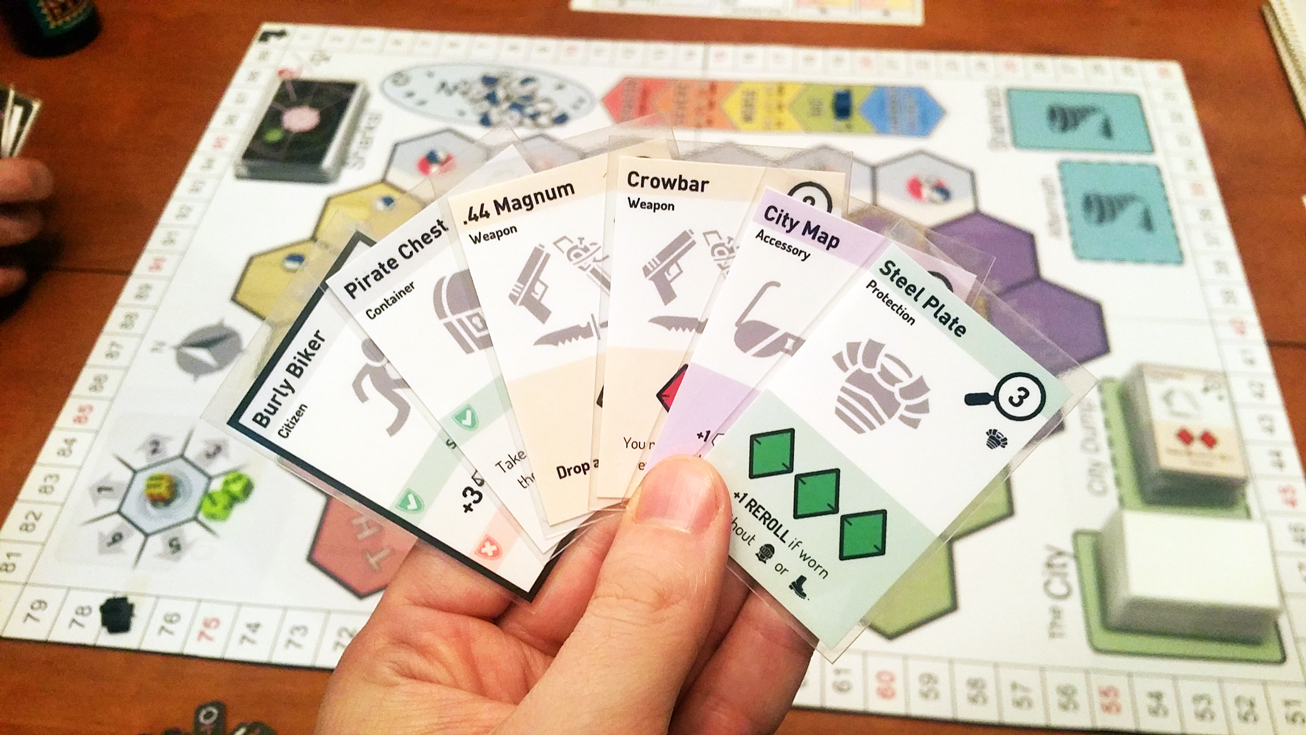 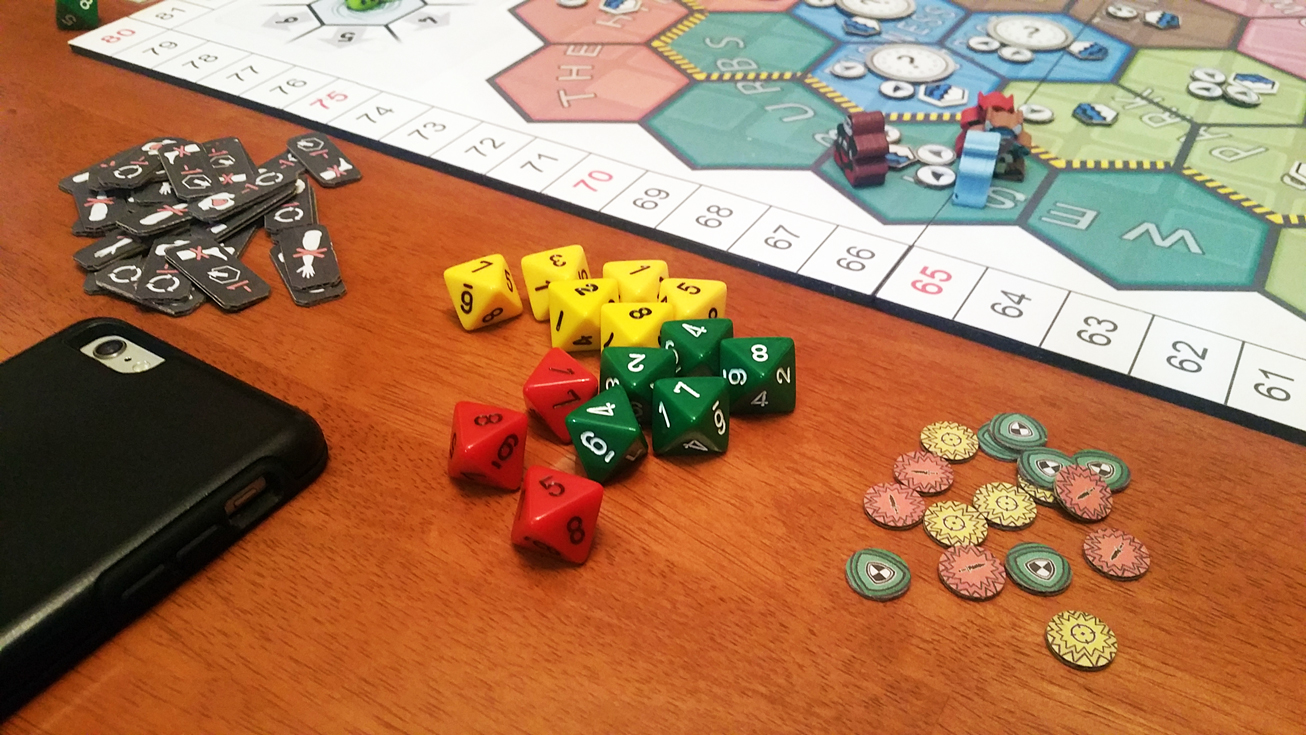 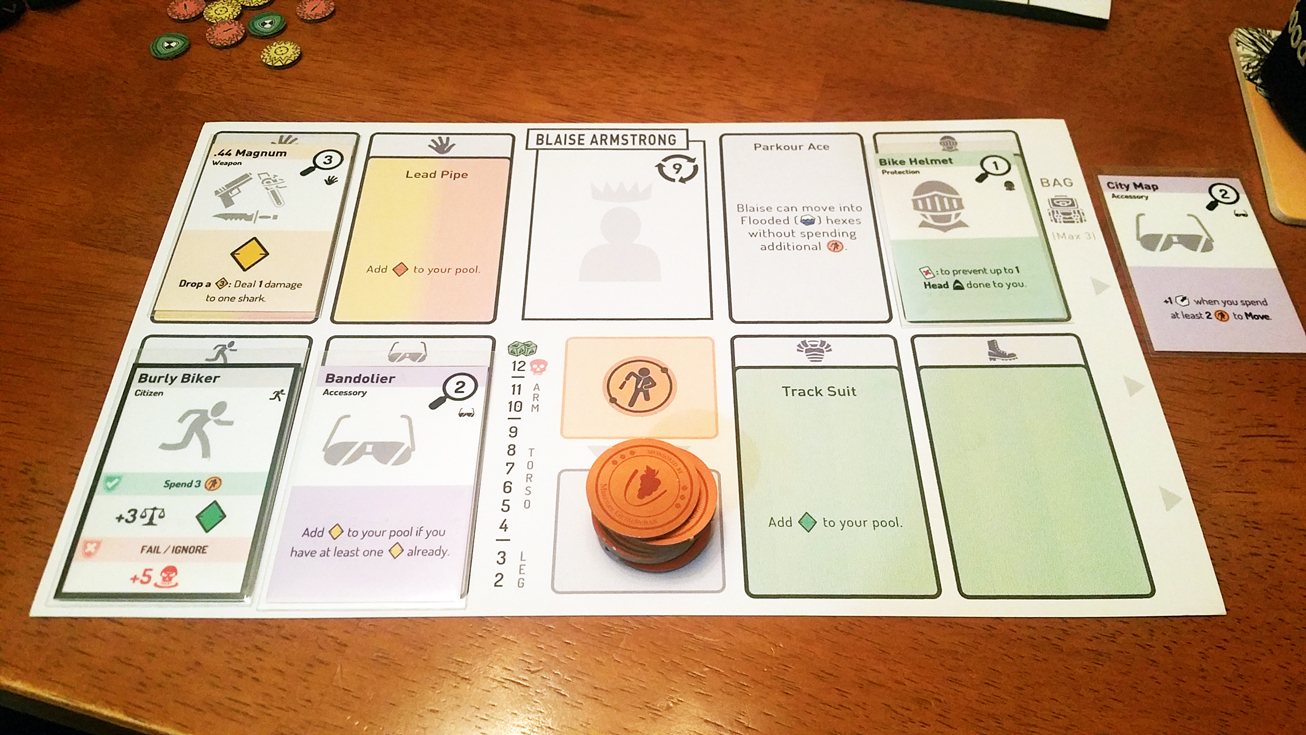 About Sharknado™: The Board Game!

A note from the DD guys: In the time between when we did this pairing and when we posted it, many smaller elements of the game are now different that are mentioned here, so it’s worth noting that because this is a prototype, some things are bound to change. Keep an eye out for a future Sharknado™: The Board Game! Pairing, in which we’ll be sure to mention some of the revisions we made since this post!

Sharknado is a registered trademark and copyright of The Global Asylum Inc. Licensed by Syfy Ventures 2016, All Rights Reserved.