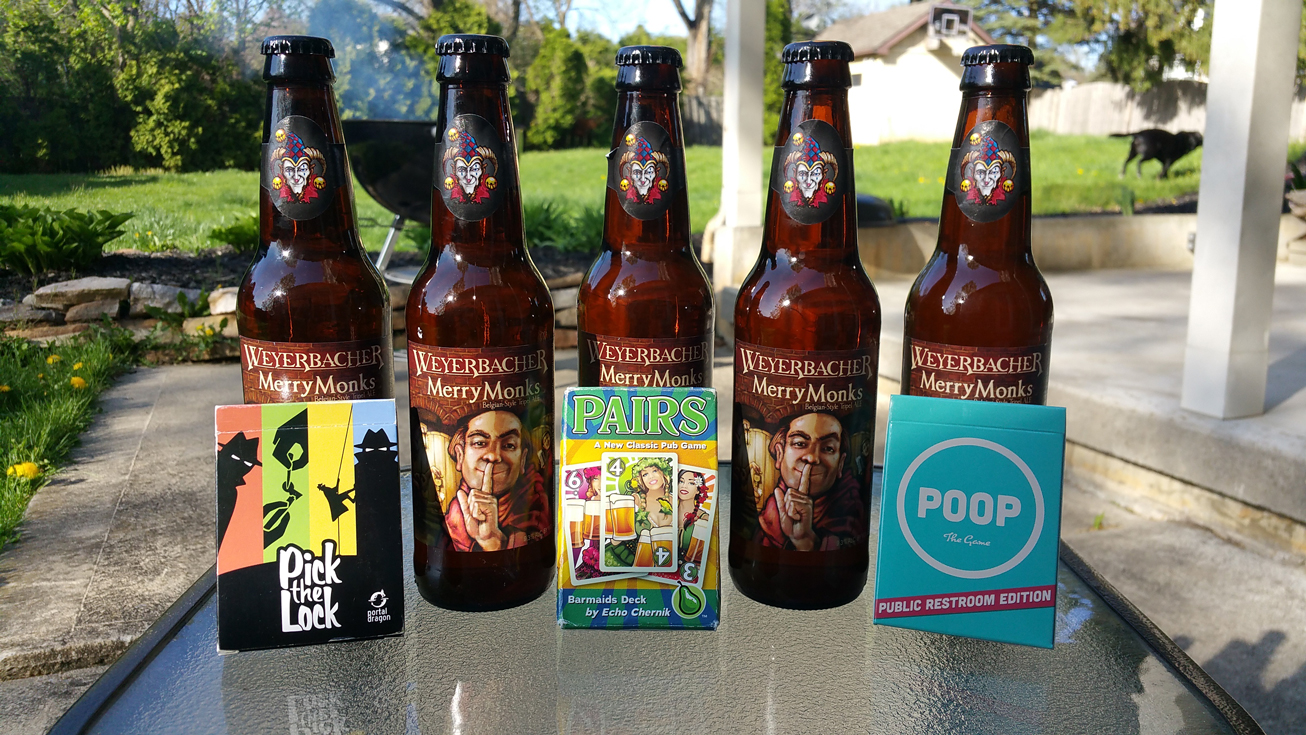 We love a good Belgian-style tripel—high ABV, serious flavor, heavy on the malt. We’ll look for any excuse to pick one up. But pairing beers thematically with games sometimes isn’t so easy.

So, to quench our thirst, we paired one beer with three games—hence, the tripel triple.

We played three smaller games, all of which are fast-paced and take less than thirty minutes from unboxing to clean-up: POOP, Pairs, and Pick the Lock.

See an alliteration going? Now we’re going to shatter that, because we paired these three with Merry Monks from Weyerbacher Brewery (our second pairing featuring a Weyerbacher beer).

POOP is a lot like Uno, except… well, it’s about pooping. More specifically, it’s about trying not to clog a toilet. Sound gross? It is! But it’s also a lot of fun. We played the Public Restroom Edition, featuring gross public potties and three toilets in play instead of one.

Pairs is a quick and easy push-your-luck game in which the point is to (a) have the least number of points, and (b) don’t get pairs. The deck is made of values of 1 through 10 in a pyramid fashion (so there’s one 1, two 2’s, three 3’s, etc.). It plays with the speed and ease of blackjack and features a casino variant if that’s your thing. We played with the Barmaids deck featured art by the talented Echo Chernik.

Pick the Lock is a recent release and like the others is a product of Kickstarter. Players are thieves attempting to steal treasures by guessing part of a combination that’s set by the player to their left. Play goes for five rounds, and once all the treasures are stolen from the vault (a small center deck) players have no choice but to try to steal from each other to have the most points by the end of the game when all their thief cards are gone.

And finally, our beer: Merry Monks is a Belgian-style tripel made by Weyerbacher, one of our favorite local breweries. Most Weyerbacher beers are higher than average in ABV, and this one is no exception. At 9.3%, and drinking at a rate of a bottle per game… do the math. It’ll get you messed up and make your mouth happy while doing so.

We’re pretty fond of doing the occasional smaller game night, during which we’ll play a bunch of shorter games in the time it might take to play a big-box game, so this pairing captured that essence perfectly.

Merry Monks is probably our favorite tripel because it goes down oh-so-easy. It’s a hazy golden pour with a fruity aroma of banana and clove. Despite being a malty tripel, this beer is well balanced; not too sweet, not too strong. It’s available year-round everywhere Weyerbacher distributes.

So as we were enjoying some Merry Monks, we played with POOP. Everybody poops, right? Ain’t no shame in it. In POOP, each player has a hand of number cards, and there’s a toilet in the center with a value (or more than one toilet, depending on which version you’re playing).

On their turn, each player must play a card, and if the card you play (totaled with the other number cards) exceeds the toilet’s value, you’ve clogged it. There’s a bit more to it than that—including flushing and farting—but that’s the gist.

The best part of this game was one of our players, Arielle, making squishy fart sounds every round thanks to a wild (0 value) card she played. Kudos for really getting into it.

Pairs is part luck-based and part probability, depending on how well you can recall what cards have been played so far. On your turn you can hit—get dealt the next card—or fold, taking the lowest showing value among all players’ cards. Getting a pair ends the round automatically and nets that person a chunk of points. Lowest score wins. Simple, right?

This is one of those games that can really surprise you by how fun it can be, despite it being a fairly ordinary card game. Even if it seems like you’re bound to win, just one bad round can really bring down—or rather, bring up—your score. It also helps that only one person walks away the loser.

Pick the Lock was our longest game, at nearly thirty minutes for a four-player session. At its core, it’s essentially a guessing game, but as the game draws to a close, the special abilities of some of the treasures make them easier or harder to steal, so there’s definitely some endgame strategy required.

To win, Anthony was in the lead for the entire game until the last round, when Eric and Brittany both successfully snatched treasures from him to put him firmly in last place. The third Merry Monks may have had something to do with his strategy.

The nice thing about Pick the Lock is it’s simple enough for children to understand, yet appealing enough for adults to stay interested—the game is marked as ages 6 and up.

36 fluid ounces of tripel and 3 games later, we can say we stumbled away from the table feeling fulfilled and ready for a campfire and smores. We give this pairing three thumps up.

How many games can you name that begin with ‘P’?

About Pick the Lock