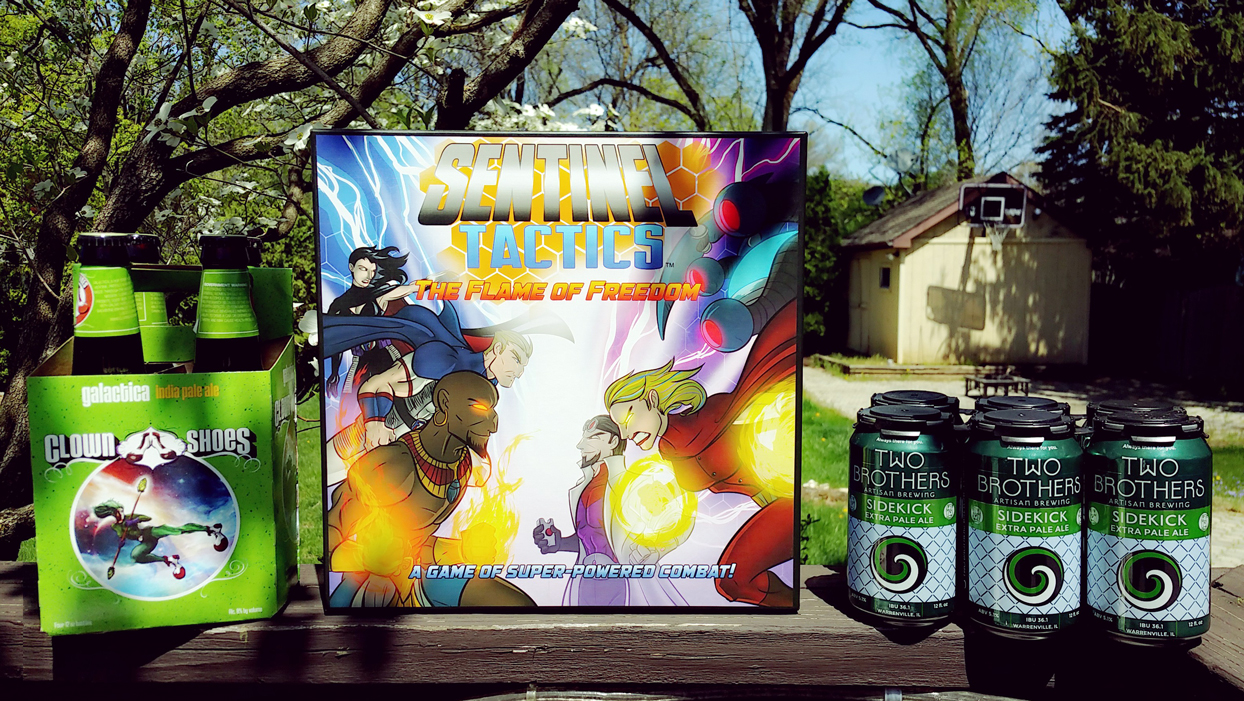 One of our favorite gateway games is Sentinels of the Multiverse, a cooperative card game filled with tons of heroes, villains, environments, and other cool stuff. We’ve used it to turn several people to the side of gaming with great success.

Then the guys over at Greater Than Games decided to put out a new game in the Sentinels universe… er, multiverse… and in 2014 they released Sentinel Tactics, a strategic combat game in which players move around a modular board, either completing scenario objectives or just beating the snot out of each other (and sometimes both).

This game is simultaneously cooperative and competitive; one player controls the villain (usually, depending on scenario) while two or more play as heroes, working together to beat the villain, while the evildoer runs around enacting his/her evil plan.

It’s a bit more advanced than its card-game cousin, but not terribly so: At its core, players can move, attack, or complete objectives. Tokens influence the strength of attacks and defenses. Each character has innate powers, and can then play further abilities from a hand of cards.

Of course, there’s a lot more to it than that, but the basics are easy to understand. Folks who enjoy advanced tactical games will appreciate the details like elevation changes, line of sight, and range attacks.

We paired this with two superhero-themed beers: The first was Clown Shoes Galactica, an India pale ale. Clown Shoes has a penchant for wacky labels, and this one is no exception—Galactica features a super-heroine wielding a hop staff.

And what is a superhero without a Sidekick? Naturally, our second beer was Sidekick Extra Pale Ale from Two Brothers Artisan Brewing, because every good hero needs one.

One of the coolest things about Sentinel Tactics is that the scenarios are written into a comic book that explains the backstory before you launch into the game. Then the comic continues, and new scenarios are presented, creating a campaign mode if you wanted to keep the game going. It’s a really creative (and fitting) way to draw you into the stories.

In the scenario that we played, the giant sentient robot Omnitron-V needed to activate seven out of nine objective spaces, placed around the board, before the heroes incapacitated it three times (because if we’ve learned anything from the comics, it’s that no one really dies).

Anthony played the villain, while Eric and Tom teamed up against him as Absolute Zero and The Wraith, respectively.

As Omnitron-V spat out drones left and right, keeping the heroes busy while it attempted to activate objective markers, it seemed like this fight was going to be one-sided. But that’s the tactics part of the game—it’s not as simple as, “Let’s go mess ‘em up.” Without a solid strategy, you’re bound to lose, regardless of which side you’re playing.

Eric’s strategy, as Absolute Zero, was to create a wall of icy hazard spaces to block objective markers (think Elsa from Frozen making giant punji pits), while The Wraith, played by Tom, decided the best offense is a good offense, and used her ability to target multiple opponents to kill drones and hit the giant robot simultaneously.

Our two beers, although both pale ales, are on opposite sides of the spectrum. At 8% ABV and 86 IBU, Galactica is a super-powered kick in the mouth in the best way. The aroma is fruity and very hoppy. Each sip is a surprise, with notes of malt coming through to give it a tinge of sweetness behind the bitter citrus.

The Sidekick Extra Pale Ale, by contrast, stands at 36 IBU and 5.5% ABV, making it a mild, clean beer, an ideal session brew for outdoors in the summertime. Orange and tropical fruit flavors come through strong, and although the aroma comes through potently hoppy, the bitterness is subdued enough to be enjoyed even by those who aren’t pale ale fans.

We drank these two in tandem by first enjoying the robust Galactica, and then following it up with a mellow Sidekick, the perfect combination for the two-and-a-half hour Sentinel Tactics session.

Right… if we didn’t mention it before, this can be quite a long game, particularly with new players.

Ultimately, despite being a large, menacing robot that threatens humanity’s very existence, it turns out that throwing knives are very effective against Omnitron-V. While Absolute Zero blocked objectives, The Wraith took the robot down directly. It was a photo finish; if Omnitron-V would have had one more turn (nay, action even), it would have completed its objectives.

We haven’t yet tried creating our own scenarios, though it’s certainly an option, as is doing a “battle royale” with no objectives other than to cream each other in combat. Which we’ll definitely be doing next time. And if you’re a Sentinels fan, you should definitely give this one a go.

What other “multiverse of games” do you love to play?