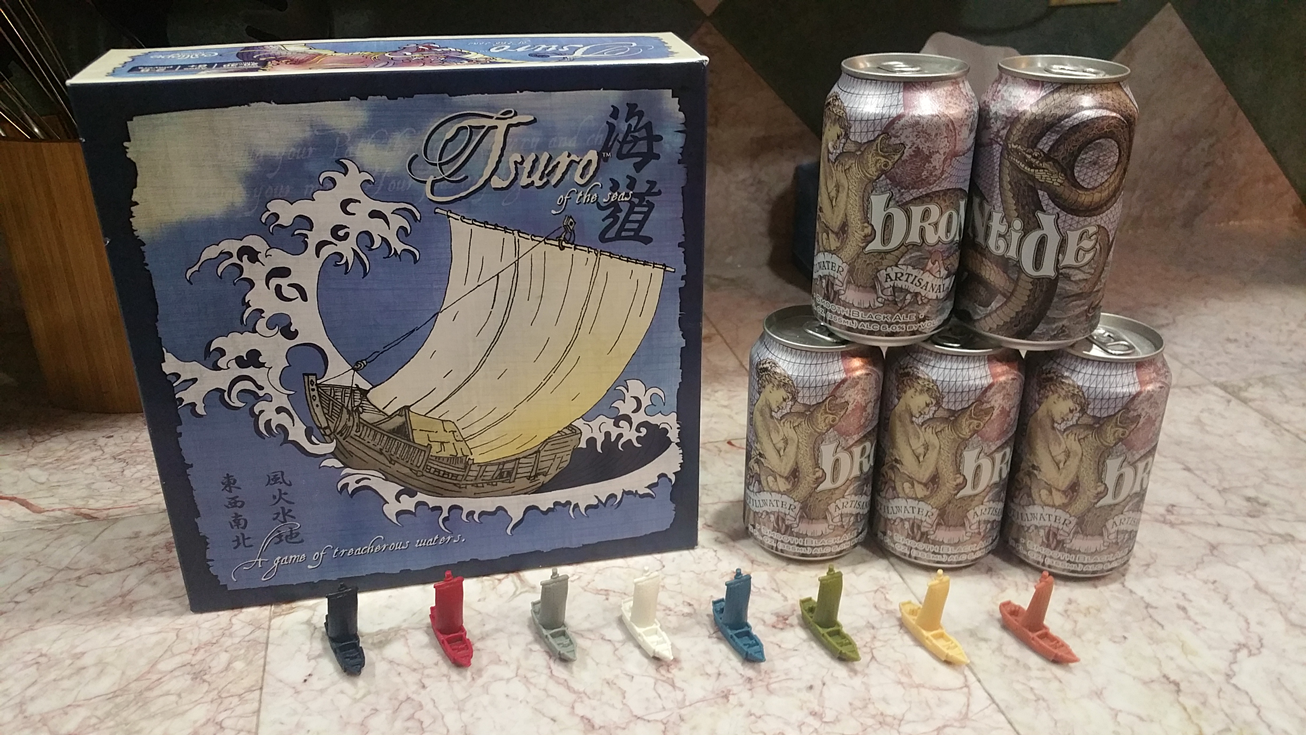 Tsuro has been, for some time, a perennial favorite filler game in our group. It’s fast, it’s light, and it’s fun. (And yeah, Japanese enthusiasts, we know the “t” is not completely silent; we’re being cheeky.)

Then, just a few years ago, Calliope Games released a sequel, Tsuro of the Seas—a game every bit as pretty and fun as its older sibling, but with the added mechanic of sea monsters that try to eat you and each other.

Tsuro of the Seas is still a pretty quick game, though not nearly as quick as the original (setup, game play, and cleanup are about 30 to 40 minutes total, as opposed to 15 to 20). The mechanics are very similar—each turn, the active player lays a tile in front of their ship and follows the path. As players cross paths, the opportunity arises to force other players off the board.

In this one, however, players also roll two dice each turn to see if any sea monsters (the dangerous daikaiju), laid out randomly on tiles, move. If they do, they may run over players’ ships, thus devouring them and/or sending them to the briny depths.

That’s about it: Don’t move off the board, don’t get eaten up, and don’t lay a sequence of tiles that would form an infinite loop. Easy, right?

We paired this with Brontide, a dark ale from Baltimore-based brewery Stillwater Artisanal. We hadn’t yet tried any of their beers, but we were drawn to the classic, elegant art on the can. Not only is the design just as pleasant as Tsuro’s, but hey, it features sea serpents too!

(Just a sidenote: We’re super stoked to get our hands on Stillwater’s forthcoming “sake-style saison,” a product of a collaboration between them and Kiuchi Brewery of Japan, who makes Hitachino Nest White Ale.)

Tsuro of the Seas is just plain pretty. The art is attractive, the design is uncomplicated, and the components are high quality. When you open the box, you’ll find a printed sheet of vellum paper that doesn’t seem to serve any other purpose than to look nice, and beneath it, a full-color tri-fold rulebook on card stock. It seems that Calliope went through great lengths to make a really alluring package.

This is one of the few games in our collection that can accommodate up to 8 players, a limit usually only posed by party games. It is, however, player elimination, and while it’s fast enough for that to not matter too much, elimination is entirely circumstantial—you can make all the right moves, have a strategy, and there’s still the chance that some ornery sea monster will swoop into your space and make noms out of you.

Daikaiju will try to eat you and each other. Case in point, Alfred got eaten in the second round. Mike got unceremoniously pushed off the board (sailed right off the edge of the world, we guess) and was never heard from again. On the next round, Eric got eaten, resulting in a win for Anthony.

If there’s anything to be said about strategy in Tsuro of the Seas, it’s that it’s not so much about trying to win as much as it is about trying not to lose—if that makes sense.

The Brontide black ale was as dark as the Stygian depths to which Alfred and Eric were condemned. And we mean dark—an inkier pour than a Guinness, with a foamy, light brown head that dissipates quickly. The flavor was smoother than we expected from a black ale, though; lightly-roasted malt is the dominant flavor, with just a hint of chocolate and espresso.

At only 5% ABV, this one is a good session beer for those who like Belgian ales and want to try something a bit different. Stillwater Artisanal distributes in 45 states, so most people shouldn’t have too much of a problem finding it.

Tsuro of the Seas is a quick, fun game that is easy to learn. We recommend it for anyone who doesn’t mind the randomness of the AI mechanic, and those who’ve played regular Tsuro before and are looking for something new, but familiar.

(We were not, however, able to find any meaning for the name; some websites say it translates from Japanese to “fish,” while others said it meant “fast.” We don’t know for sure, so if you do, let us know in the comments!)

What are your favorite easy-to-learn games?

About Tsuro of the Seas