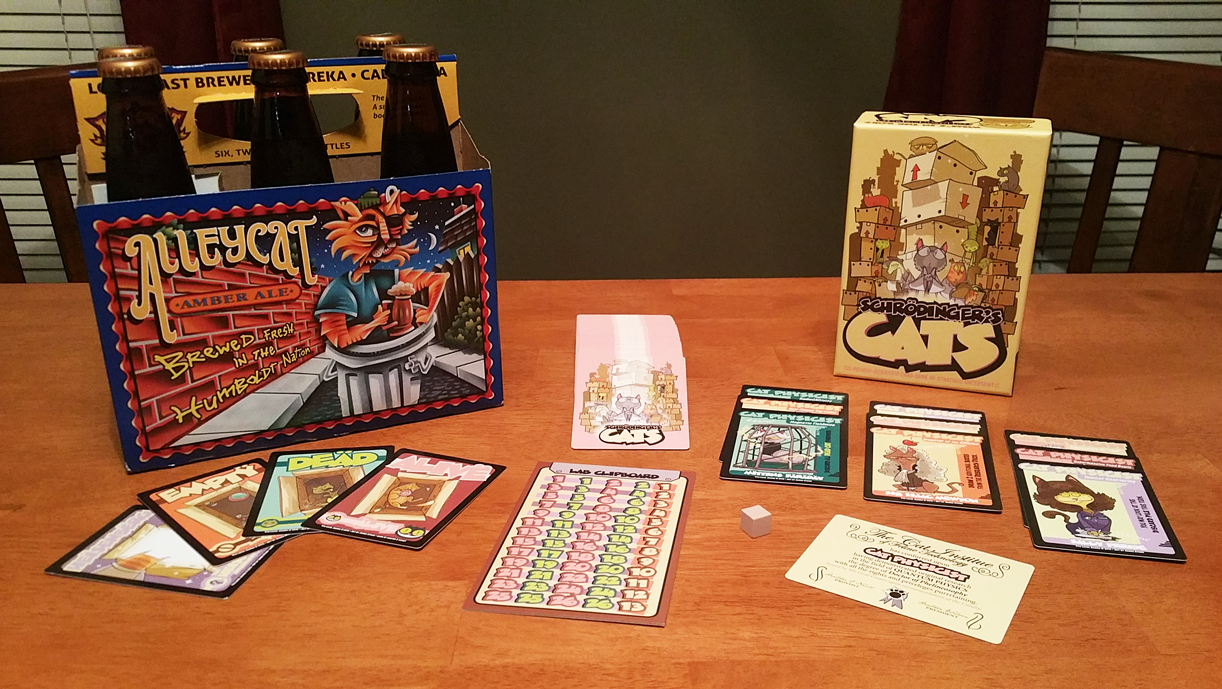 When Erwin Schrödinger is away, his cats come out to play… and they’re also physicists.

That’s the idea behind Schrödinger’s Cats, a bluffing/deduction game from Ninth Level Games, creators of the popular RPG Kobolds Ate My Baby (“All hail King Torg!”), and the subject of this week’s Game & Beer Pairing.

As cat physicists, players replicate Schrödinger’s famous experiment in a pseudo-sciencey way: Each turn, a feline scientist makes a hypothesis based on the number of alive cats, dead cats, or empty boxes that they believe the players hold between all of them in hidden hands of cards.

The next scientist can either up the ante with a greater hypothesis, or call their fellow researcher’s bluff. Each round ends with the ejection of a scientist (yeah, it’s player elimination, but more on that in a jiffy) and a new round begins with fewer cards in play, until there’s only one cat left standing.

And when you’re playing a cat-themed game, you need a cat-themed beer, right? There are a few of them out there, but for this pairing we chose Alleycat Amber Ale from Eureka, California-based Lost Coast Brewery.

Let’s get right to the issue: We would say that we normally don’t care for player elimination games, but that’s sort of like saying we don’t like any movie with car chases, or anything that smells like lavender. Basically, there are other factors to consider.

Case in point: Schrödinger’s Cats is player elimination, but each round gets shorter and faster with fewer scientists, and by the end, when everyone is out but two players, the final round takes about two minutes.

Moreover, the game is fairly fun to watch, so even if you’re out on the first round (as Anthony was) you’re not just sitting there twiddling your thumbs; you’re staying engrossed as a spectator.

Player elimination isn’t a make-or-break mechanic—at least not for us—but the way in which the eliminations are handled, the length of downtime for eliminated players, and how well the other mechanics mesh with elimination all play heavily into how much fun (or not fun) a game like this one can be, and Schrödinger’s Cats gets pretty high marks in our book.

The cat physicists in the game are all adorable, punny names for scientists of note, like Neil Degrasse Tabby and Marie Purrie. (In fact, aside from Madam Purrie’s almost skeletal appearance, the art and cat puns had even the most hardened of us tilting our heads and muttering, “D’awww….”).

The Alleycat Amber Ale, on the other hand, was like a cat physicist’s shiftless, ne’er-do-well brother. Even the label features a salty cat sporting an eye patch standing in a garbage can while drinking a mug of (presumably) his namesake beer, no doubt foraging for delicious trash and those fish skeletons that always seem to be in one complete piece in the cartoons.

Alleycat has a dark copper appearance with hints of reddish brown. The pour was cloudy, which isn’t a bad thing—it suggests an unfiltered brew, which made for a malty, full taste. A slight bitterness counteracted the caramel flavor. Overall it was a mellow brew—only mildly sweet, slightly bitter, and very drinkable. This one would be a decent substitute for a typical lager.

Ultimately it was down to just Alfred and Mike as the last scientists standing, and with just two cards each in hand, their options for hypotheses were limited. Alfred made a bold guess about empty boxes and “showed his findings” (revealed a card from his hand), which led Mike to a winning guess—err, hypothesis—about the other hidden card.

Although it’s not classified as a party game, Schrödinger’s Cats would be a good game to break out even in a non-gamer setting, and the player elimination aspect just means that ousted scientists have a few minutes to use the bathroom, grab another drink, and get back to the table in time for the next round to start.

Is the beer in your fridge light, dark or amber?