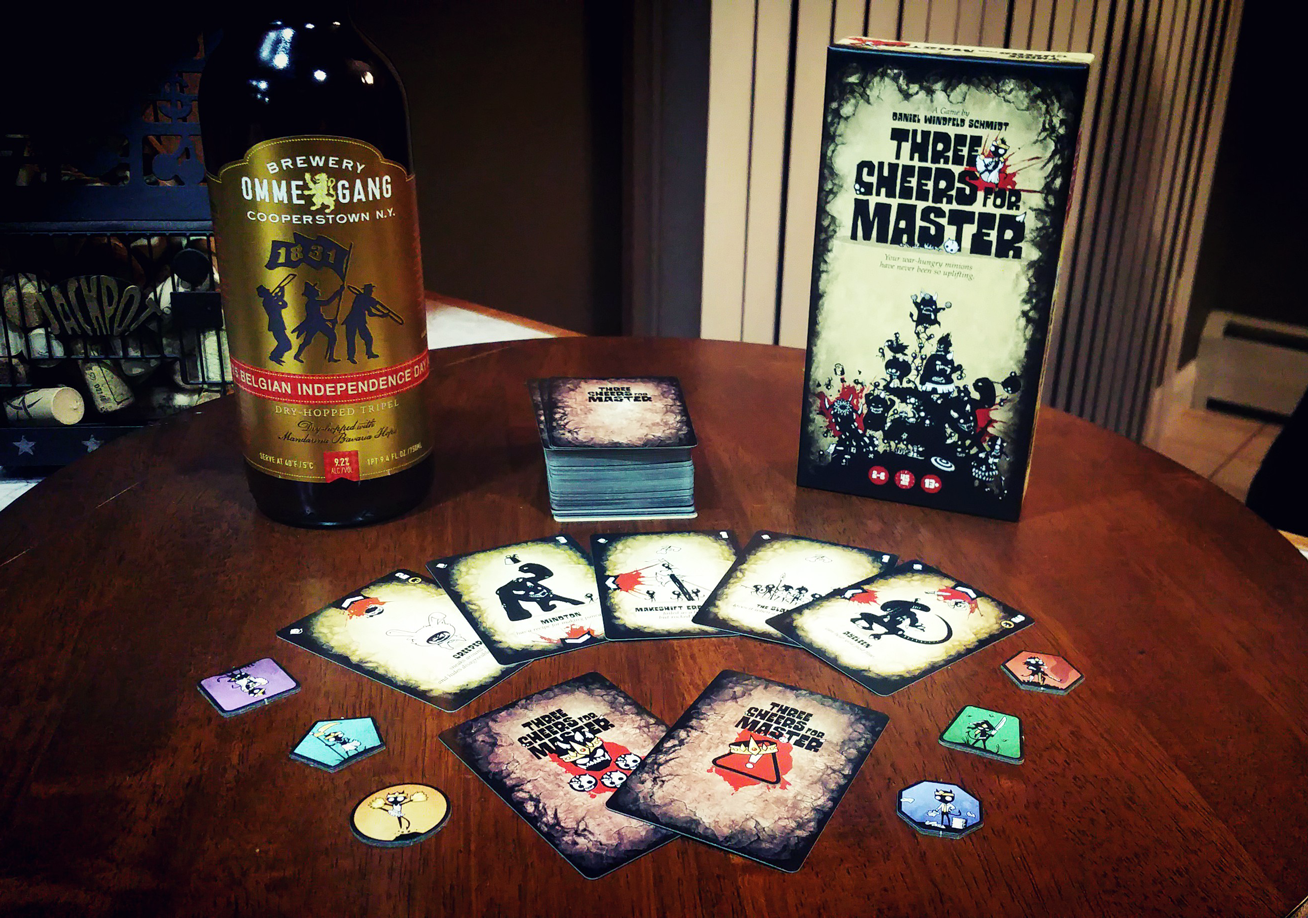 They say, “Don’t judge a game by its cover,” but we couldn’t help ourselves—as soon as we saw the box art for Three Cheers for Master, we knew we had to put it in a Game & Beer Pairing.

There’s just something terribly appealing about the silhouette art style, the random blood spatters, and the vicious little minions that just want to make their Master happy.

Imagine you’re a “foreminion” in an evil empire of demons, monsters, and other generally-bad stuff. Master is kind of down lately, so you want to show your zeal for unquestionably serving his purpose by forming an impressive tower of minions. It’s like the dark equivalent of a cheerleading pyramid.

Trouble is, these minions have claws and teeth and big jaws and heavy feet and bad attitudes, so every once in a while, a fight breaks out, and some of your minions might get eaten, trampled, squished, or just plain murdered in the melee.

That’s the basis of Three Cheers for Master from Atlas Games, the same company that brought us Gloom… and like its next-of-kin, this game is thematically dark, the flavor is intensely humorous and the artwork is underworldly.

We could have paired this game with three beers (for three cheers!), or something with an ominous label, but instead, we opted to match it with a tripel ale from Brewery Ommegang of Cooperstown, NY, specifically their BID 2015 Tripel.

Despite how its name might sound, a tripel is not three beers in one. The term was coined for the strongest beer made by Trappist monks in the 1950s. A tripel typically uses up to three times the amount of malt during the brewing process, making for a more robust and all-around tastier beer.

Ommegang’s BID 2015 Tripel not only upped their malt game, but they hopped-up as well, producing a well-balanced, copper-colored beer with a strong, foamy white head.

And while we’re on the subject of heads, a few got bitten off during our game.

We couldn’t pick a favorite thing about Three Cheers for Master. The art is awesome, done in black and white with liberal blood splatters to note aggression. The flavor is unrivaled and hilarious—each minion has its own little bit of flavor text, like Fuzzyworm, who “sleeps in your mouth at night,” or Dingleberry, who “loves to pick up hitchhikers.”

The gameplay is fairly simple once you get going. At first the rulebook seems a bit daunting for its size, considering the game is all cards and a few tokens, but there are a lot of little rules about how different minions are played, how they attack each other, and which ones attack before others.

Player turns are simple, playing just two cards and drawing back to three in hand every turn, and reference cards are provided for the various minion types. Players can not only play minions in their own tower, but in opponents’ as well, in an attempt to disrupt whatever strategy they had going.

The real trick to the game, and the part that builds all the tension, is that minions don’t attack each other every turn. Instead, trigger cards are placed throughout the deck at random so that when revealed, your minions take the opportunity (and glee) to kill whatever they can in your tower, starting in descending order (there’s a pun about heavy minions in there if you’ve played the game).

For example, Eric played a Ninja minion—one that is played face-down—in Alfred’s tower so he could fret over what danger might be lurking there for a few turns before a Big Hairy Fight broke out (really, that’s what it’s called), and the sneaky lil’ minion could murder a neighbor or two.

As simple as it is, it’s also highly strategic. It’s like playing Tetris with cards. Except that some minions eat others and squish them to death and whatnot. The endgame is triggered immediately when the Master shows up, which is by a random card shuffled into the lower third of the deck and brings with it three final Big Hairy Fights.

Just like the game, the Ommegang BID 2015 Tripel was delicious and light for what it was—in terms of smoothness, it goes down like a session ale, a stark contrast from what we’ve come to expect from a tripel that’s over 9% ABV. The flavor is well balanced between hops and malt, with equal parts fruitiness and spice on the palate. If you’ve never tried a tripel before, this one would be a good place to start.

Anthony ended up winning the game with 16 points (if you’re keeping score at home, that’s the first game he’s won in a while), followed by Mike with 14, and the others ranging from 6 to 11. The margin for victory in Three Cheers for Master can be very narrow—as little as a single turn, which is where the timed mechanic really comes into play.

Play this game if you can. It’s really terrific! 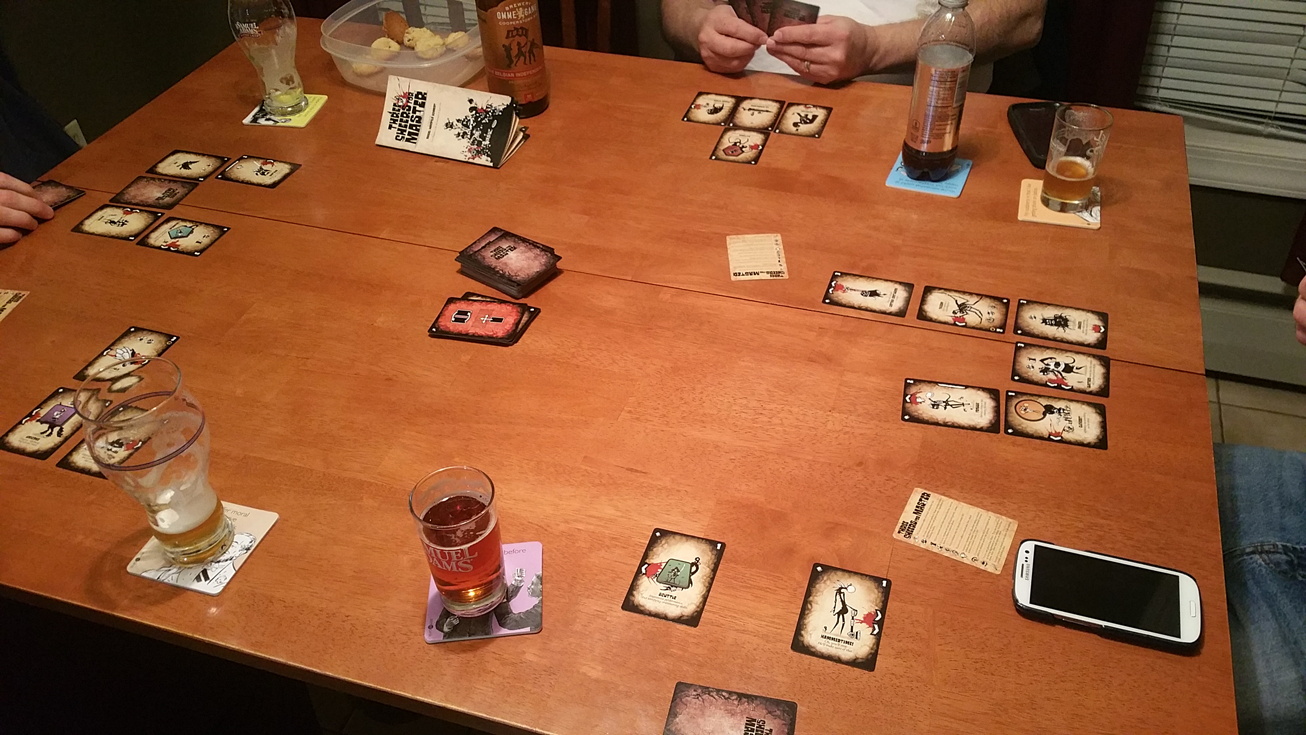 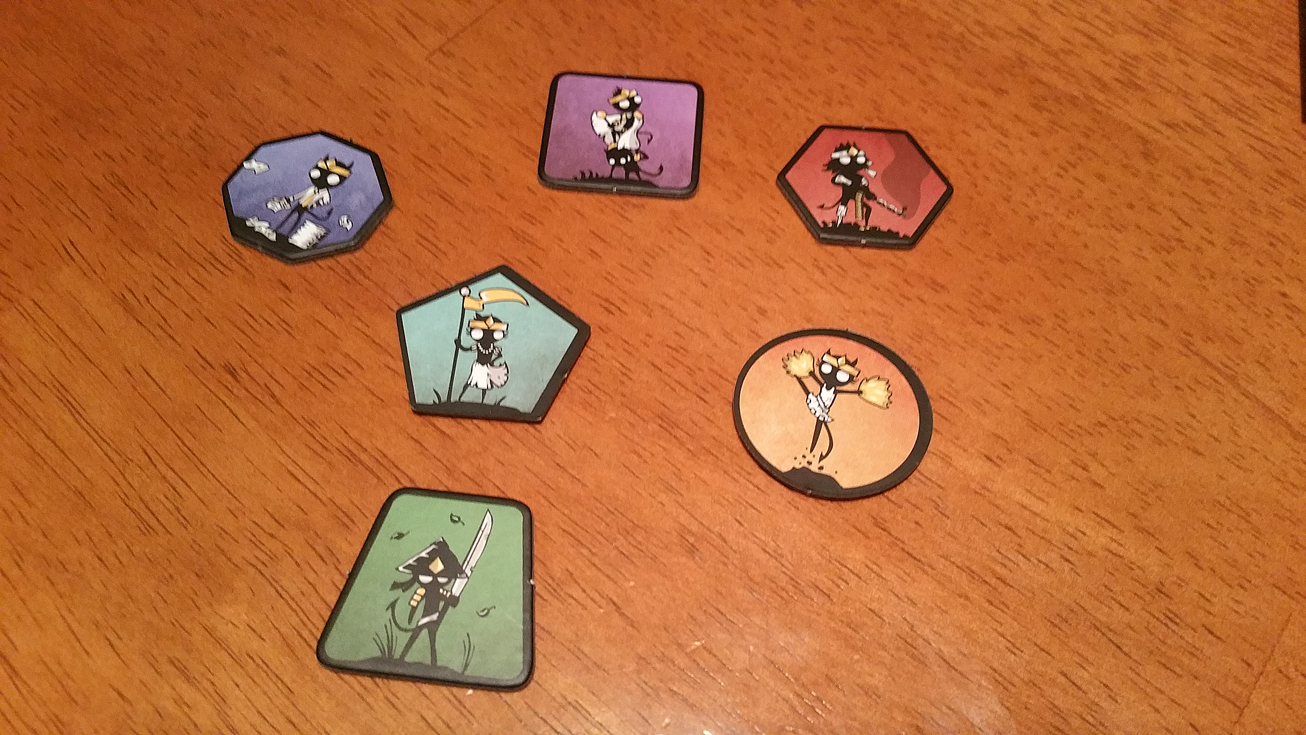 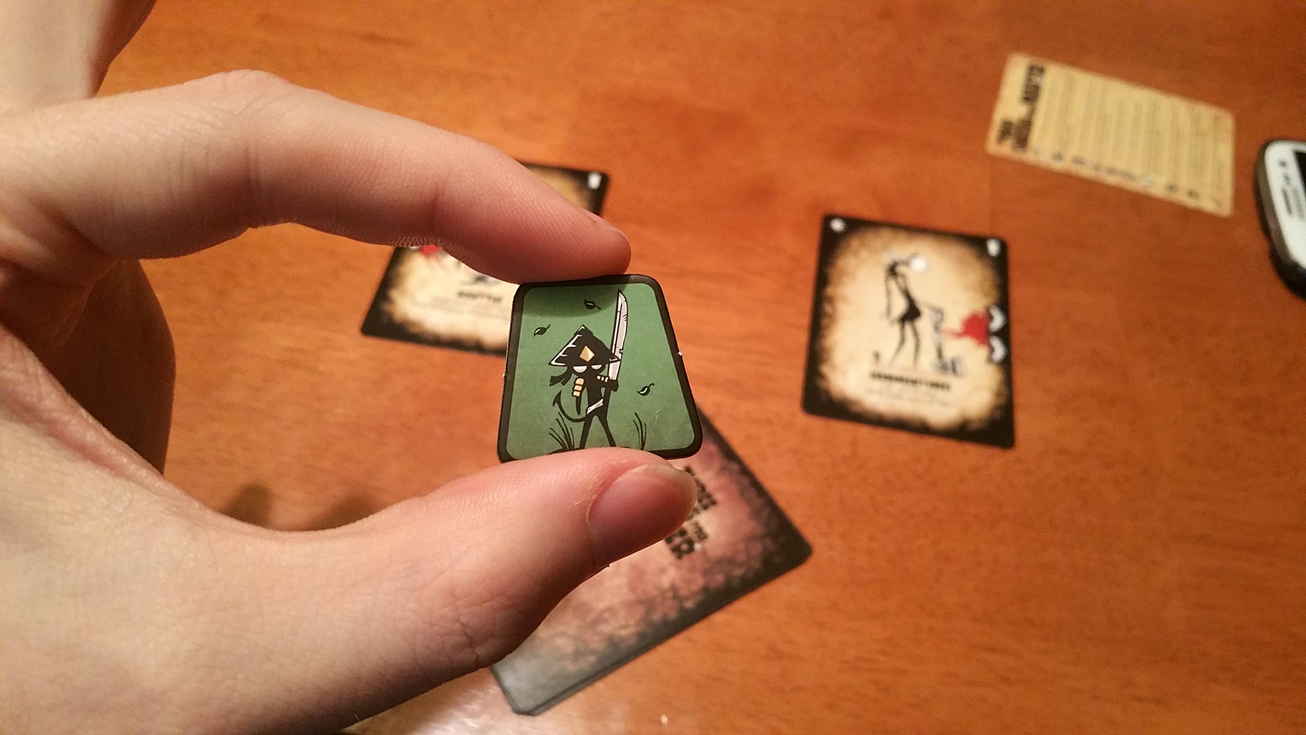 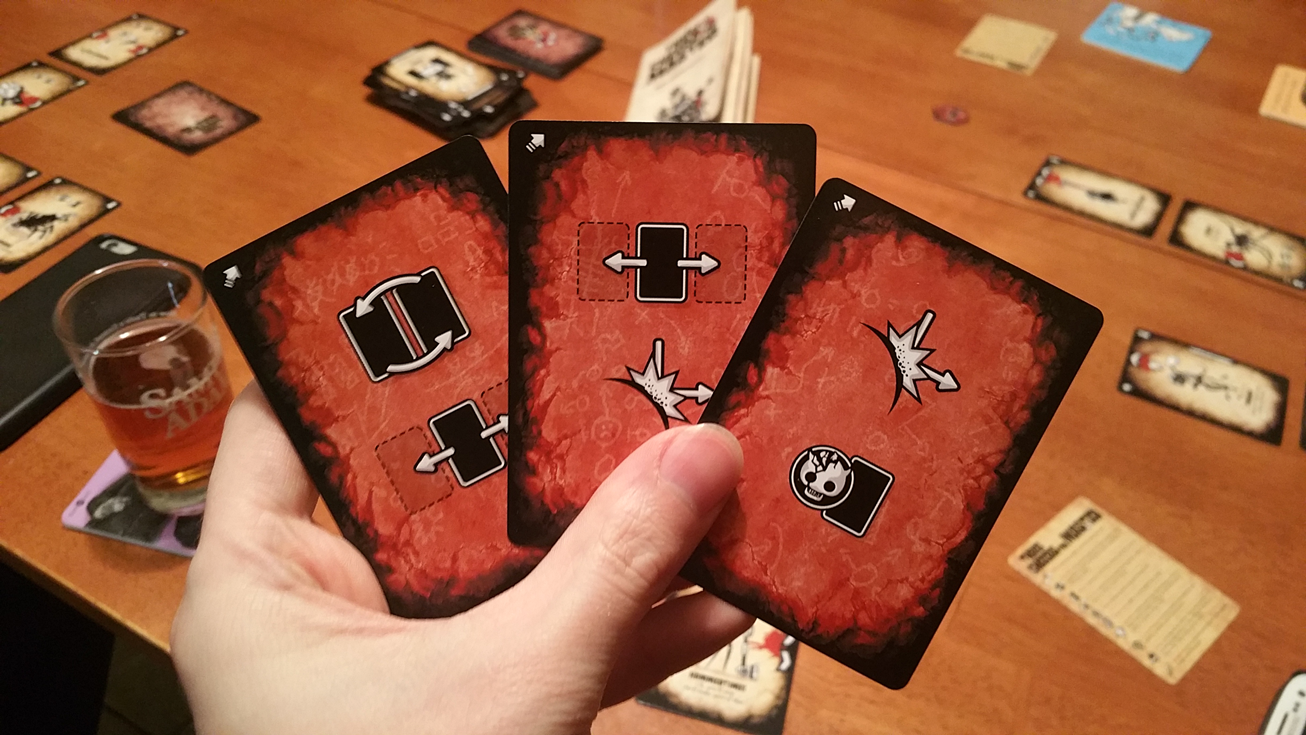 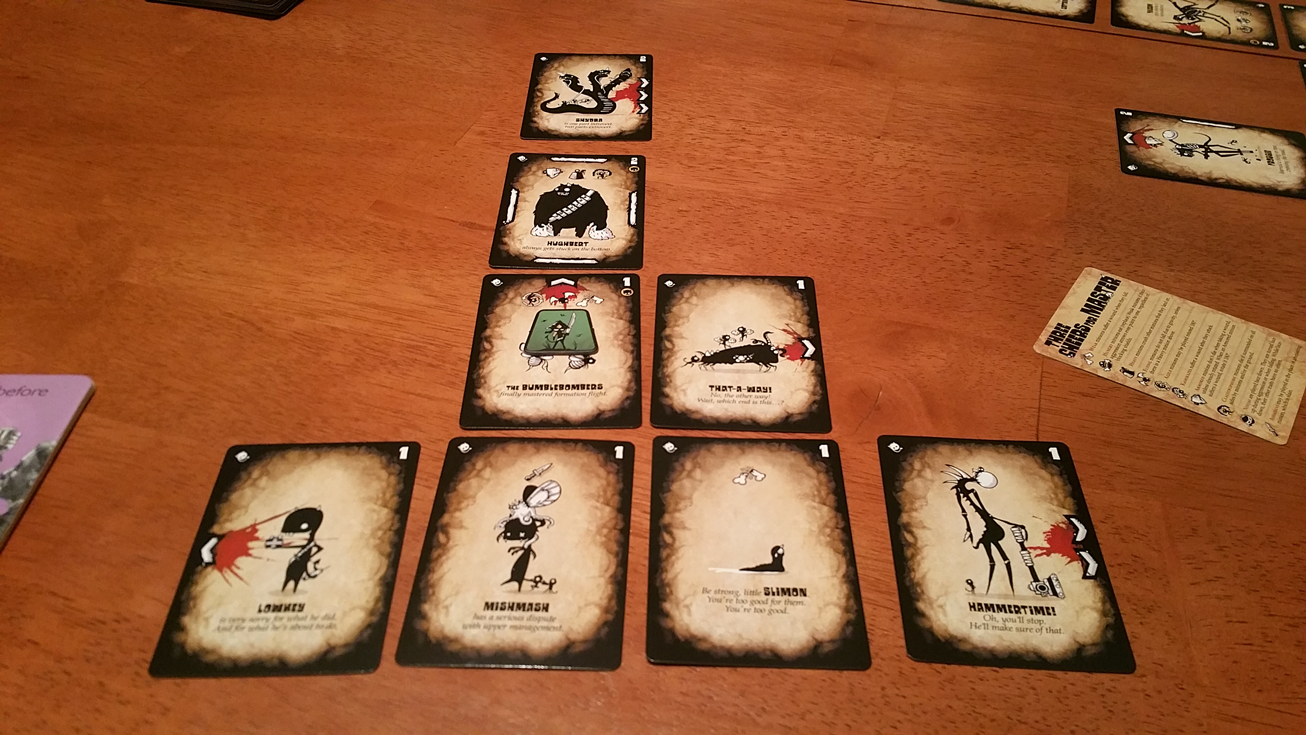 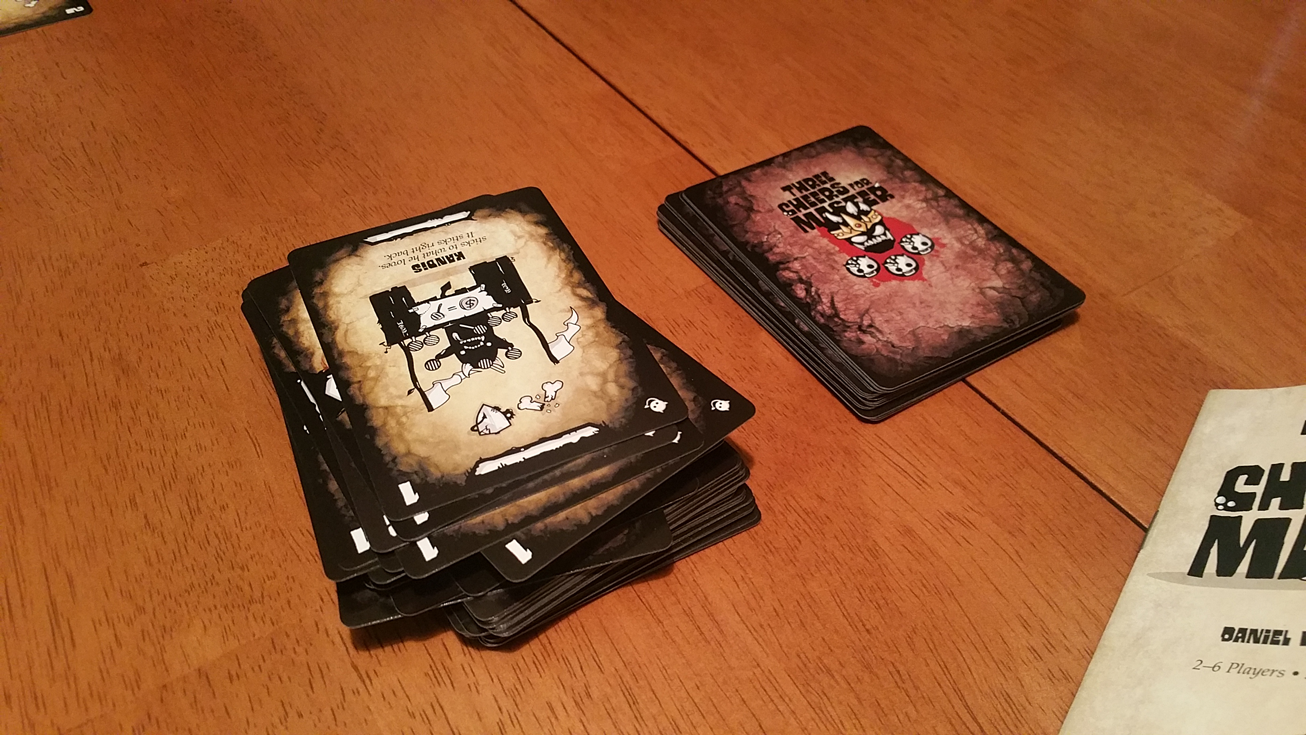 About Three Cheers for Master