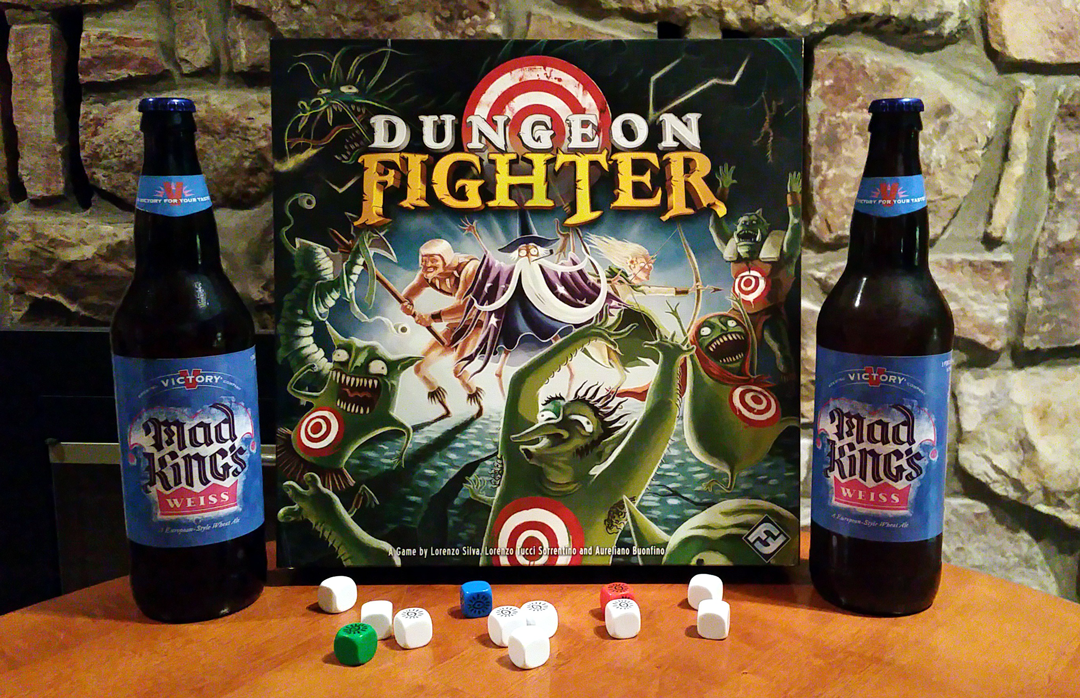 We’re still kind of reeling from our session of Dungeon Fighter. It was simultaneously one of the most raucous, humorous, and frustrating games we’ve ever played.

For this week’s Game & Beer Pairing, we partnered Victory’s Mad King’s Weiss with a game that one of our group members, Mike, brought over for us to check out. We read over the rules, and instantly decided we needed to play it.

Dungeon Fighter is a painfully mundane name given the nature of this game. At a glance, it’s a cooperative dice-chucking dungeon crawl. But just beneath the surface, it’s a zany dexterity game that requires trick shots, a sense of humor, and patience practice. Loads of practice.

Ever tried to throw a die under one leg while jumping in the air and have it bounce once on the table before rolling onto a target board? Because that’s how you defeat monsters in Dungeon Fighter. Sort of.

The premise of Dungeon Fighter, made by Italian company Cranio Creations, is that players are self-proclaimed heroes. In an effort to discover who the real heroes are, the king throws the lot of us in a dungeon and says, “Make your way out or die.” (Hence the beer pairing—Mad King’s Weiss seemed fitting.)

Almost every time you fight a monster as you make your way through three levels of the dungeon involves some sort of trick shot, be it bouncing a die off your forehead, tossing it from beneath the table, or—and we can’t even make this up—borrowing the neighboring player’s hand.

This is another one of those games that is not exactly agreeable to pint glasses on the table, unless you want a beer-soaked die or wrinkly boards, but since we had five players it was easy for the non-rolling players to grab them up.

Dungeon Fighter’s art is fun and downright goofy, which aligns well with the theme of the game and instantly evokes the sense that this is a game not to be taken too seriously.

Dungeons are constructed in three tiers, chosen randomly, and ending in a boss monster. (We did not make it to the boss monster. We all died in level two.)

In fact, our very first monster was a Cute Bear, a measly two-hit-point creature that nearly killed us. The trick shot was flicking a die from the top of a closed fist and bouncing once on the table before hitting the board. The target board is laid out like an archery target, with the outer ring being 1 hit, and the bulls-eye being worth 10.

It sounds easy, but by the end of the fifteen minutes and three rounds that it took to defeat our first monster, we were cursing the mad king that consigned us to this godforsaken dungeon.

Speaking of, Victory’s Mad King’s Weiss is a smooth, tasty wheat beer with notes of citrus. It was the kind of beer that one might drink while laying on a lawn chair on a summer afternoon. Enjoying it while playing Dungeon Fighter, amid shouts, laughter, swearing, and flying dice, was like sipping Earl Grey with a pinky up while driving a hundred and ten down a freeway.

Fun beer fact: There are two distinct varieties of German-style wheat beer, one being the weiss, and the other the wit. Weissbier is usually stronger in flavor and color but lighter on sweetness, while witbier is lighter, sweeter, and generally has more citrus flavor. (Blue Moon and Hoegaarden are both witbiers—when you think of wit, remember “white.”)

So as we sipped a mellow weiss we went slowly insane as round after round of trick shot eluded us. Anthony tried several times to use Lady Mary’s power of Seduction to lure monsters, but only succeeded in enticing a lowly goblin. Luckily we had an ace in the hole—Alfred’s leering barbarian, Torm, saved the day twice thanks to his double-damage-dealing ways.

But ultimately, we were no heroes—we succumbed to the second level of the dungeon. After a near-death experience with a headless monster who demanded we bounce the dice off our foreheads, we were defeated by a were-monster that should have been easy pickings. 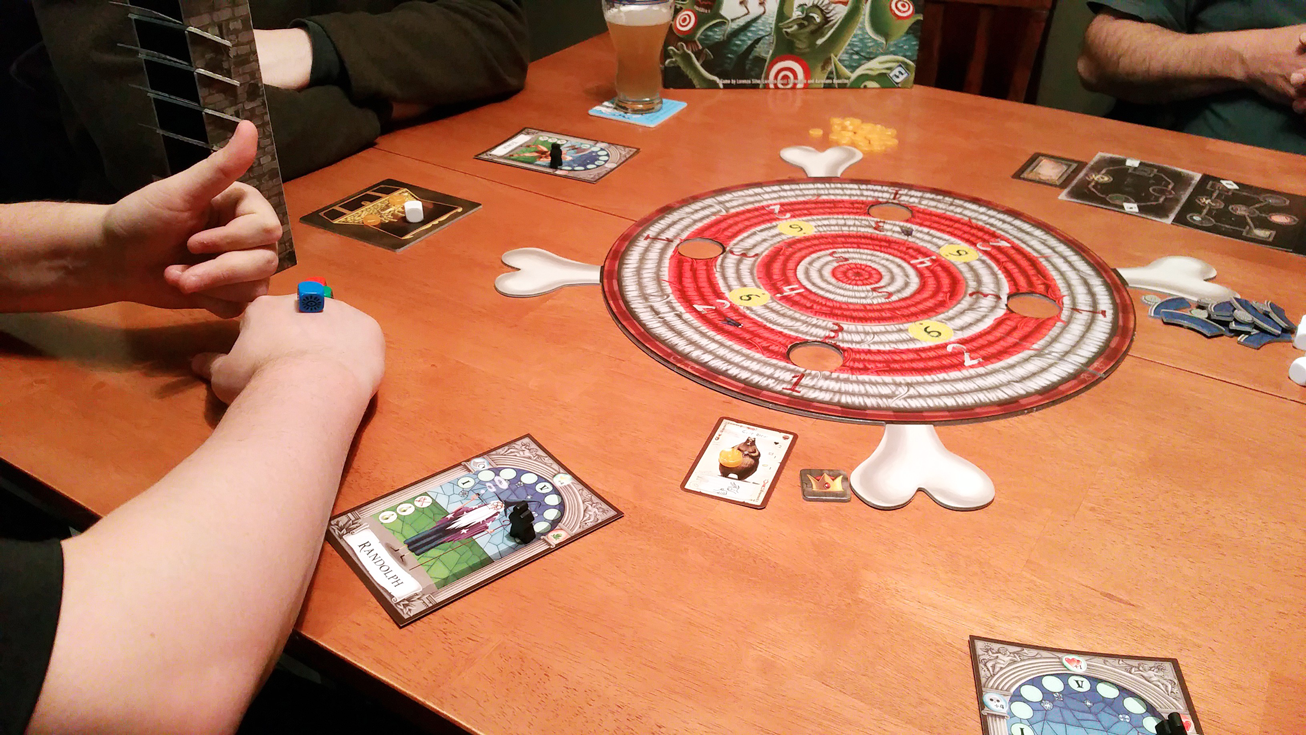 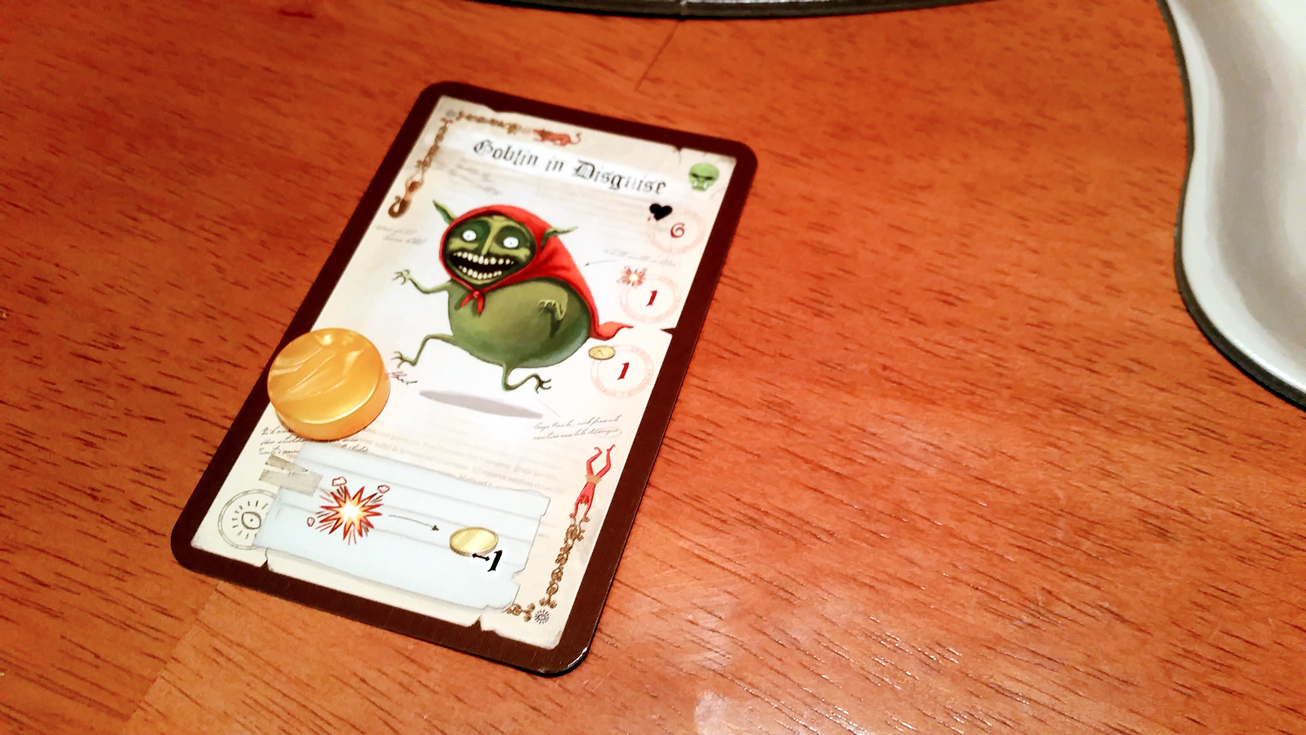 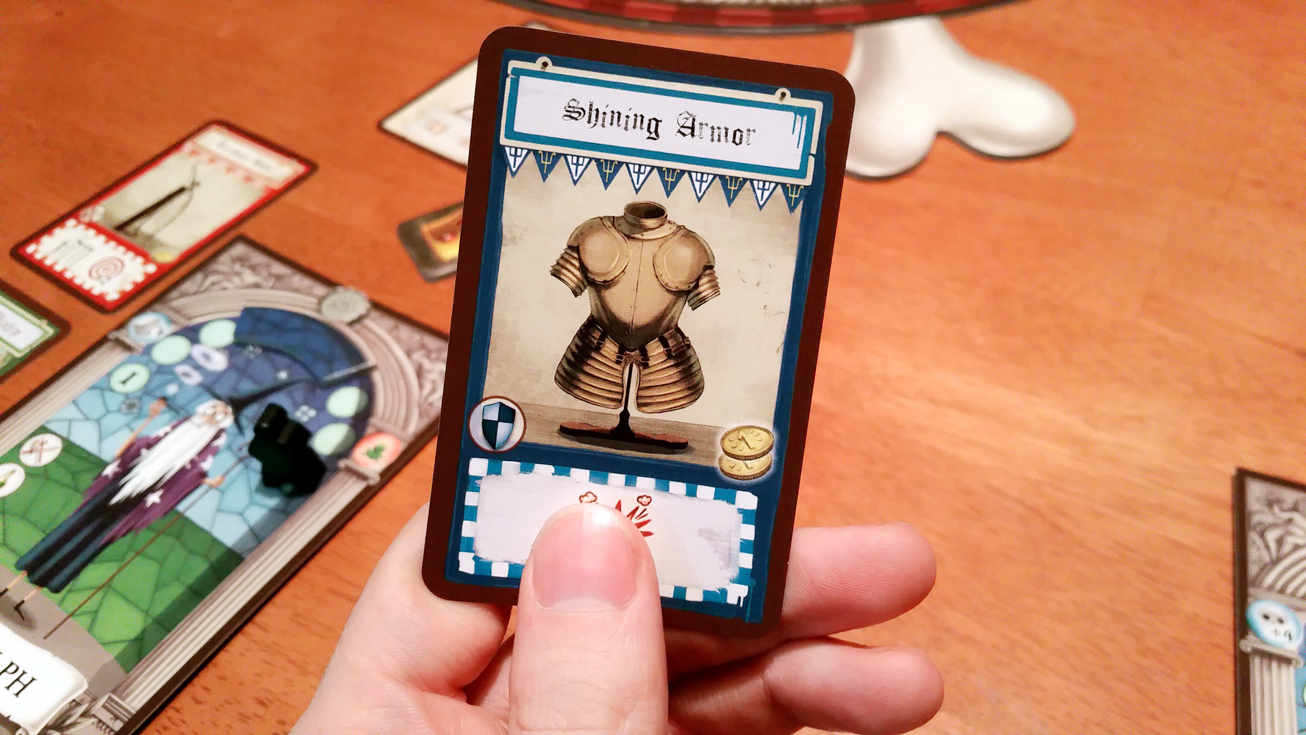 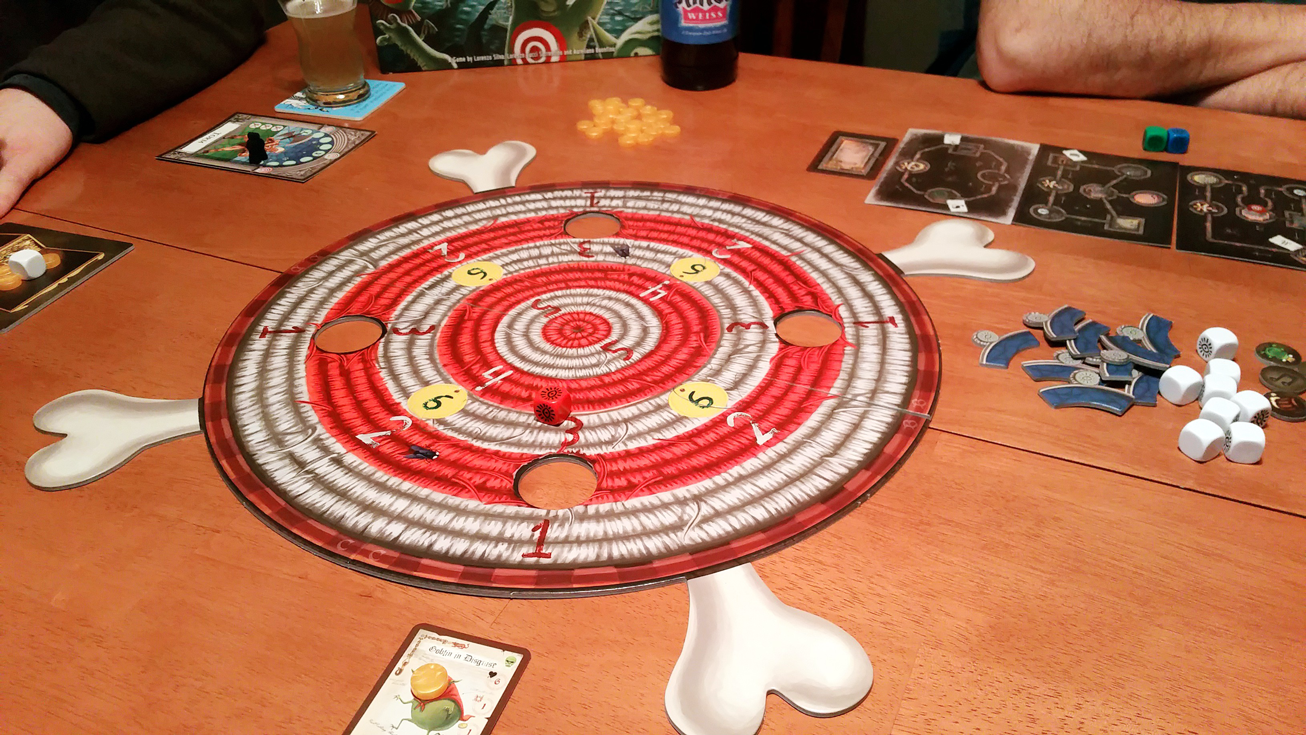 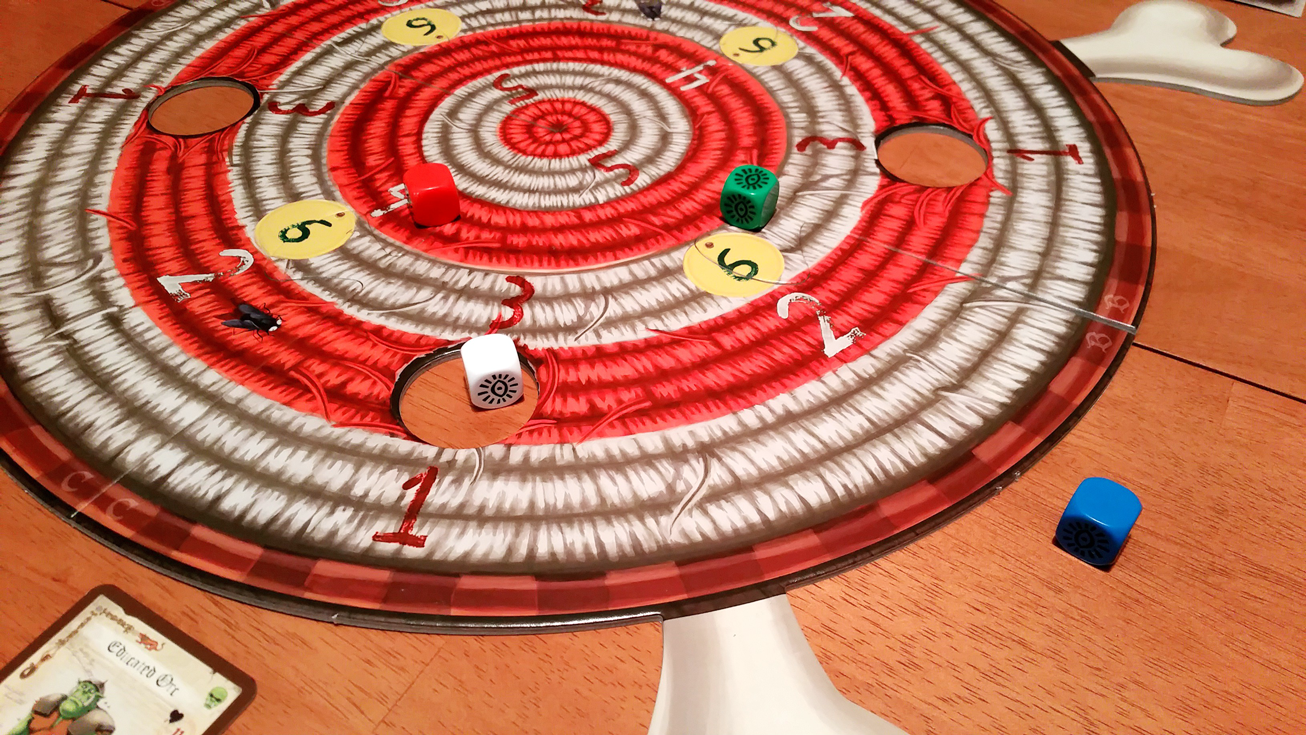 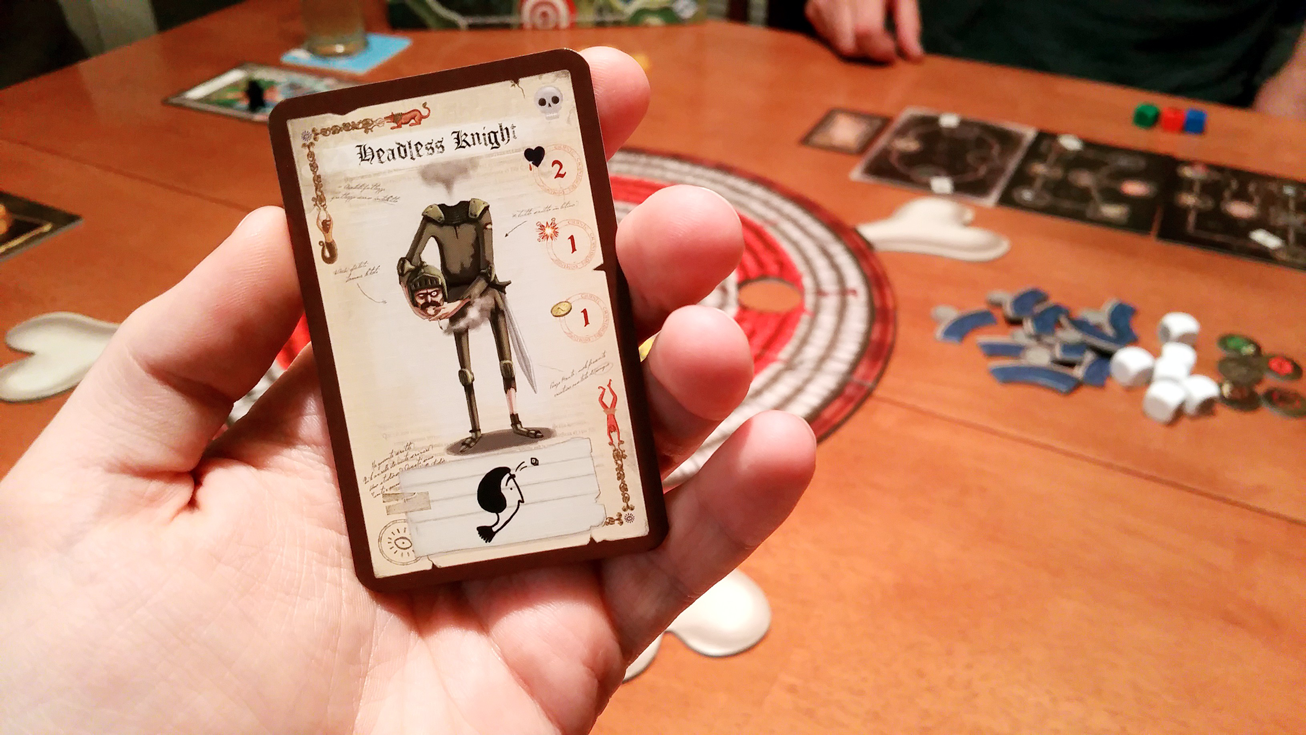 Dungeon Fighter is just one of those games that’s so wonky and fun that even in failure, you immediately want to play a second game, which is exactly what we’ll be doing again soon. This time, with more beer.

What dexterity games do you own and love?