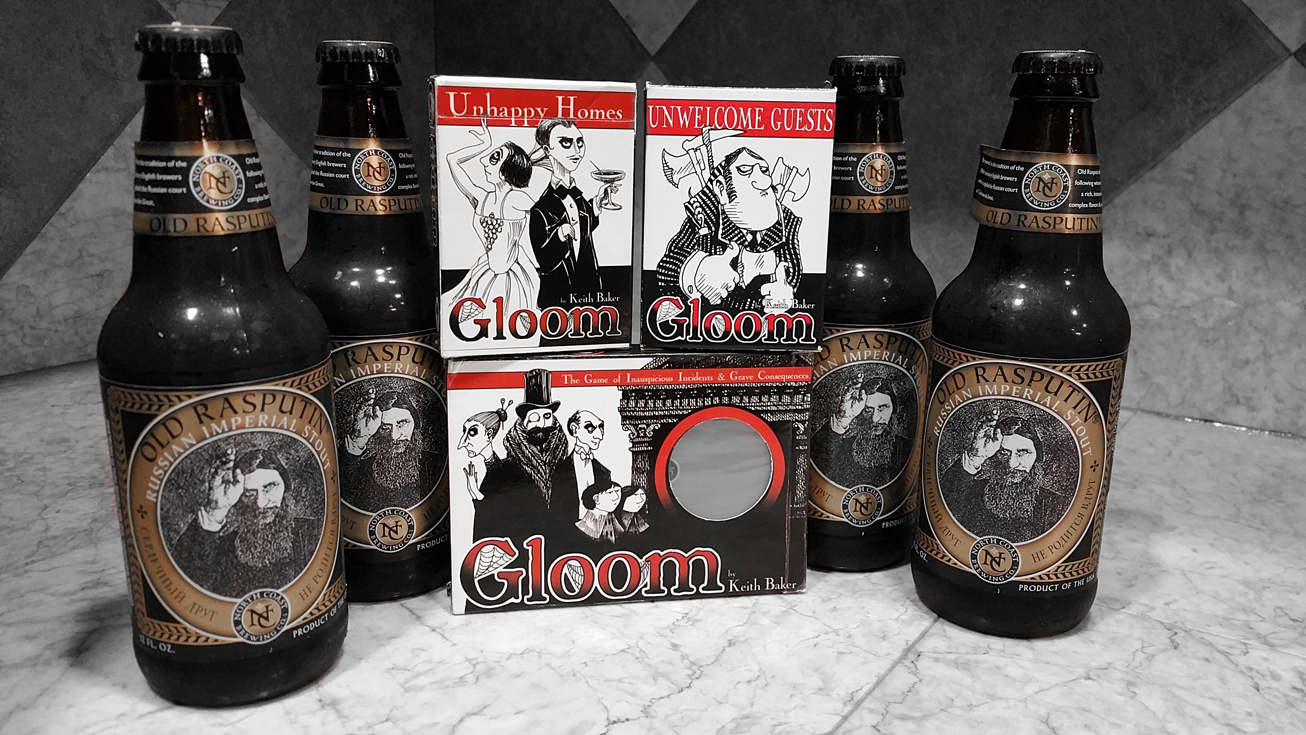 All you game designers out there, listen up; you can take a lesson or two from this week’s Game & Beer Pairing.

This time around, we played Gloom by Atlas Games. In Gloom, each player controls a family of dour souls bent on dying in the most tragic ways possible. For example, one of the families is Dark’s Den of Deformity, a group of horribly failed circus performers. Another is the hillbilly-esque Stark family of Blackwater Watch.

The theme is dark—killing off your family and at the same time having the lowest Self-Worth score by playing negative Modifier cards on your characters—but the humor and alliteration makes it work. Not only does it work, it includes one of the most ridiculously simple, albeit brilliant, mechanics we’ve ever encountered—transparent cards.

The clear plastic cards work to negate or enhance the effects of previous Modifiers by covering icons and numbers in different positions. When you’re ready to off someone, you play an Untimely Death card, which essentially “locks in” their Self-Worth for end-game scoring.

And since it’s a game about killing an entire family, we thought it thematically entertaining to pair this with Old Rasputin Russian Imperial Stout by North Coast Brewing Co.

We also threw in the Unhappy Homes expansion for Gloom, which adds Residences, Mystery cards and a fifth family.

Gloom is anything but gloomy; the flavor of the tragedies that befall family members are usually hilarious, like “mauled by a manatee” or “baked into a pie.” The same can be said about our beer choice—it tastes nothing like “old peasant mystic,” but is instead deep and rich in flavor. Looks can be deceiving, can they not?

After a few rounds and by the time a family member dies, you’ve often got a pretty good storyline of the terrible—and sometimes fortunate, unfortunately—things that have happened to them.

Event cards are really the crux of the “take-that” element; even when you’ve killed a couple family members and you think you’ve got a healthy lead, someone can come along and bring someone back from the dead or trash your Modifiers.

Case in point: Anthony pulled an early lead, killing four of five family members with a hearty score of -110, when Tom forced the discard of a -40 point Modifier instilling paranoia in everyone, afraid that they would be next!

Mike caught up quickly and ended the game by killing his last family member, scoring -110. However, Mike and Anthony were so busy vying for the lead that no one realized that Alfred, with only three dead family members, had racked up a massive -120 points for the win. Cheers!

And of course while we were killing families and snapping photos, we continued to enjoy Old Rasputin, our Russian Imperial Stout, that’s as dark as the game with which we paired it. According to North Coast Brewing Co., this beer is “produced in the tradition of 18th century English brewers,” and while we’re not sure what that means exactly, it’s a gentler stout, malty with hints of chocolate and subtle hops and no beard hair to speak of.

While tragedies transpired left and right during the dreary competition, Eric’s “unfaithful hound,” Balthazar, was really the star of the show. His Self-Worth fluctuating from -40 at one point, to +15, and back down to -15 as he was relentlessly pursued by poodles, taunted by tigers and wounded by wasps before being wondrously well wed (yes, a dog) only to meet the sweet release of death at the mouths of some very hungry weasels.

The thing that we like most about Gloom is the storytelling element; the flavor of the cards adds most of that, but if you’re playing with a good creative group, you can add even more humor and fun to it by crafting a story behind the occurrences.

Know any other particularly “gloomy” beers? What are your favorite games with storytelling mechanics?