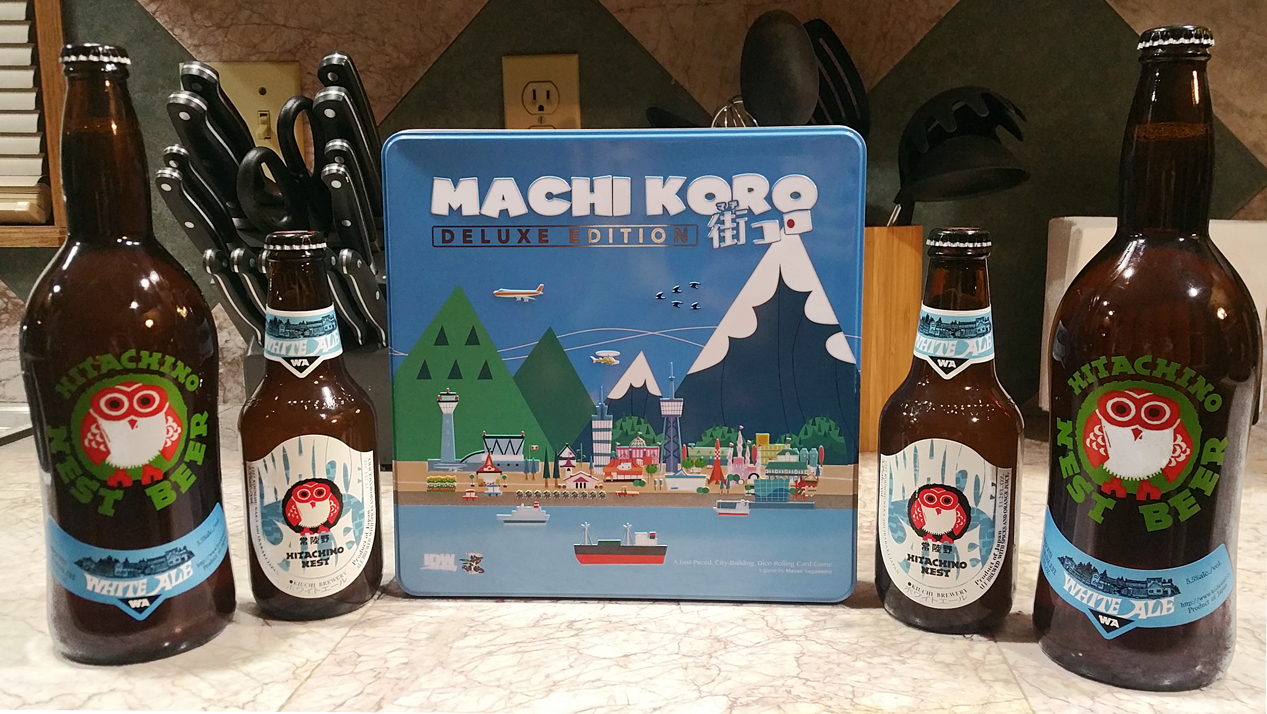 Imagine you’re the mayor of an unusual little town that consists of nothing more than a wheat field and a bakery. You want what’s best for your people, but your citizens have delusions of grandeur. They don’t want clean streets or to vote “yes” on Proposition 213. No, they want things like a shopping mall, an amusement park, and an airport.

As a public servant, it’s your duty to bring commercial establishments to your little town, make some money, and grow it into a big city worthy of your neighbor’s envy.

That’s basically the gist of Machi Koro, a Japanese card game published by IDW Games. Turns consist of just three actions; roll one or two dice, pay and/or collect coins based on your roll and then build new establishments, if you’ve got the dough.

To win the game, be the first to build all of your Landmarks (four in the base game, and in our case, six with the Harbor expansion—we have the Deluxe Edition). It’s really that easy.

When we decided to play a Japanese game, our first thought was that we’ve got the perfect excuse to drink a Japanese beer (not that we need an excuse), and Eric had just the one in mind: Hitachino Nest White Ale by Kiuchi Brewery. It fit the bill perfectly for this week’s Game & Beer Pairing.

As tends to be the case with most Japanese products, Machi Koro is an attractive game; the art is geometric, simple, and bright. The Hitachino ale made a good aesthetic companion, very nearly matching the prevailing blue of the game, complete with cute owl.

Setup is quick and the thin rulebook explains everything clearly. Turns are fast, and since you’re paying attention to other players’ rolls in case you make money, there’s essentially no downtime.

It’s fairly easy to strategize in Machi Koro using probabilities or by purchasing establishments that give you a nice, even spread; however, being a game that relies heavily on dice rolls, random luck can have a huge effect on the success of your strategy. With a single roll, you can find yourself dishing all your hard-earned coins to your fellow players or being on the receiving end of just as many.

Case in point: Anthony had establishments that activated on 1, 2, 3, and 4, yet kept rolling 5 and 6—which was great for everyone else who had Forests, but did him no good at all.

The dreaded 3 came up quite a bit, which led to high payouts that quickly eliminated a lot of coins—anyone who has played the game before knows the pain of a neighboring player combining a couple of Cafes with a Shopping Mall. Tom found himself paying out all his coins on three straight turns thanks to Cafes and Pizza Joints (both are Red Cards—establishments that steal coins from the player who rolled their number).

For this session, we played with the Harbor expansion, which is set up a bit differently than the base game in that you can’t control what establishments are showing at any given time… So that property you had your eye on for the last two turns? Gone in a flash if the player before you decides to scoop it up (like Eric stealing the Fruit & Vegetable Market). You’ll also benefit from the City Hall you start with, earning one coin on every turn you “end” with empty pockets.

We liked the Hitachino Nest White Ale with this game for more reasons than just origin and aesthetics; it’s a simple session white, reminiscent of a Belgian like Blue Moon, with notes of orange, coriander, and just a hint of ginger. It also has that owl on it, which for some reason makes it cooler. There’s a bunch of other flavors in the Hitachino Nest series, and the white was good enough to inspire us to try others in the future.

Machi Koro is not as thorough of a screw-your-friends/take-that type as others we’ve played, but based on the establishments you buy and the roll of the dice, the possibility is there to consistently have little to no money to buy new establishments—as Anthony and Tom both found.

Alfred and Eric raced to build their Landmarks in time. Alfred won by only one Landmark, thanks largely to his strategy of always rolling 1 die, and hitting a 4 at just the right time, which, with his combination of cards, gave him 12 coins in one shot (with 30 coins being the most expensive).

If you’re into games that combine a luck-based mechanic like dice-rolling with some light strategy, give Machi Koro a go. If you’re the type that likes to blame the game and the other players and the alignment of the stars for a loss that hinges on dice… well, it might not be for you.

Have you tried any Japanese beers yourself? Do you prefer more or less luck in games you play?