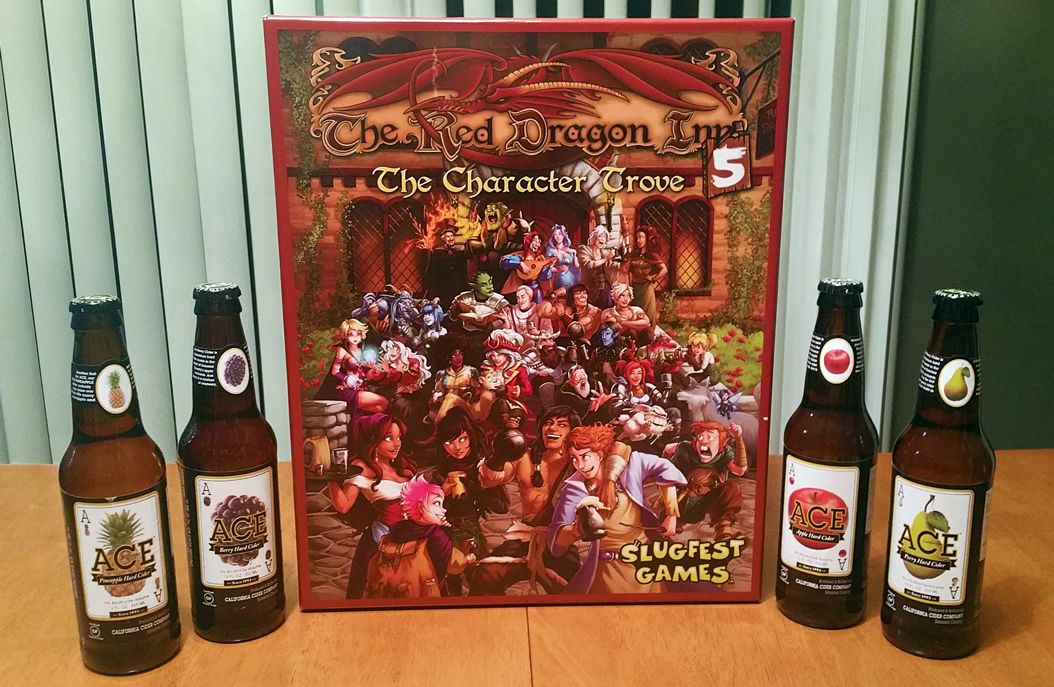 The basis of Slugfest Games’ biggest hit is that the quest is over before you’ve begun; the heroes are done with their dungeon-delving for the day and have retired to the local tavern, the eponymous Red Dragon Inn, for some drinking, gambling, and showboating.

Each character has a unique deck that highlights that particular hero’s strengths and special abilities—which you use to make sure you don’t get housed before anyone else. Turns involve a series of rounds in which you play Action cards, buy Drinks, and of course, drink said drinks with the objective of being the last man/troll/bunny/tree “standing.”

There are five base sets to The Red Dragon Inn and several expansion characters, called Allies. Our collection includes sets 3, 4, and 5, and a half dozen Allies, though for this game we played with a character from 3, two characters from 5, and one Ally.

It only felt natural to have something of a variety for this week’s Game & Beer Pairing, but rather than choose a hodgepodge of assorted drinks we went with a few flavors of ACE Premium Hard Cider, specifically apple, berry, pear and pineapple, made by the California Cider Company of Sebastopol, CA.

The Red Dragon Inn scores points for originality and consistent artwork across all its sets and expansions. The learning curve for the base game is also pretty easy, which is important, as many of the characters come with a small rule set of their own that can make starting the game with an unfamiliar deck require a couple extra minutes, especially for new players.

Once you get the hang of it—usually by your second round of buying drinks—it’s an easy play, and fairly intuitive; most cards dictate exactly what to do and many include reminder text for those that need it.

We’re not generally fans of player elimination, and in this game it’s entirely possible for someone to get targeted and be ousted early, thus twiddling their thumbs for a half hour or more. Our first elimination was our resident backyard brewer Alfred, who ran out of gold during a round of gambling about twenty minutes before the game’s end (running out of gold being one of the two loss conditions—the other is simply getting too drunk).

The Red Dragon Inn is anything but predictable; Anthony found himself, quite early in the game, with only one gold left, but when all seemed lost he managed to win a round of gambling and steal some pieces from other players. Eric had only two Fortitude left to his demise, but while the rest of us were narrowing each other’s leads, he stealthily turned it around to not only stay alive, but ultimately win (despite his own character’s Items deck constantly attacking him).

We’ve had our fair share of cider, but we’re not usually cider people. That being said, ACE Cider is pretty fantastic. The flavor variety definitely helped, and it was easier on the palate to transition from an apple cider to a berry cider than it is from, say, a lager to a pilsner. They also use this revolutionary new sweetener in favor of refined sugar and corn syrup—fruit juice. (crazy, right?!)

All ACE ciders start as an apple base, and then other fruit juices are added. So really, the pineapple cider—which was a first for us and downright delicious—is pineapple and apple cider. All of them lean on the sweet side of the scale, but very sippable, and at 5% ABV are comparable to most beers.

In short: The Red Dragon Inn is not a game for sore losers or anyone who likes to complain. It is a fun game, rife with comic relief, for the easygoing gamer who just wants to enjoy a pint (of cider) and play some cards.

Who is your favorite RDI character? Do you like your ciders on the sweet or dry side?

About The Red Dragon Inn

2 thoughts on “Drinking While Playing a Game About Drinking”