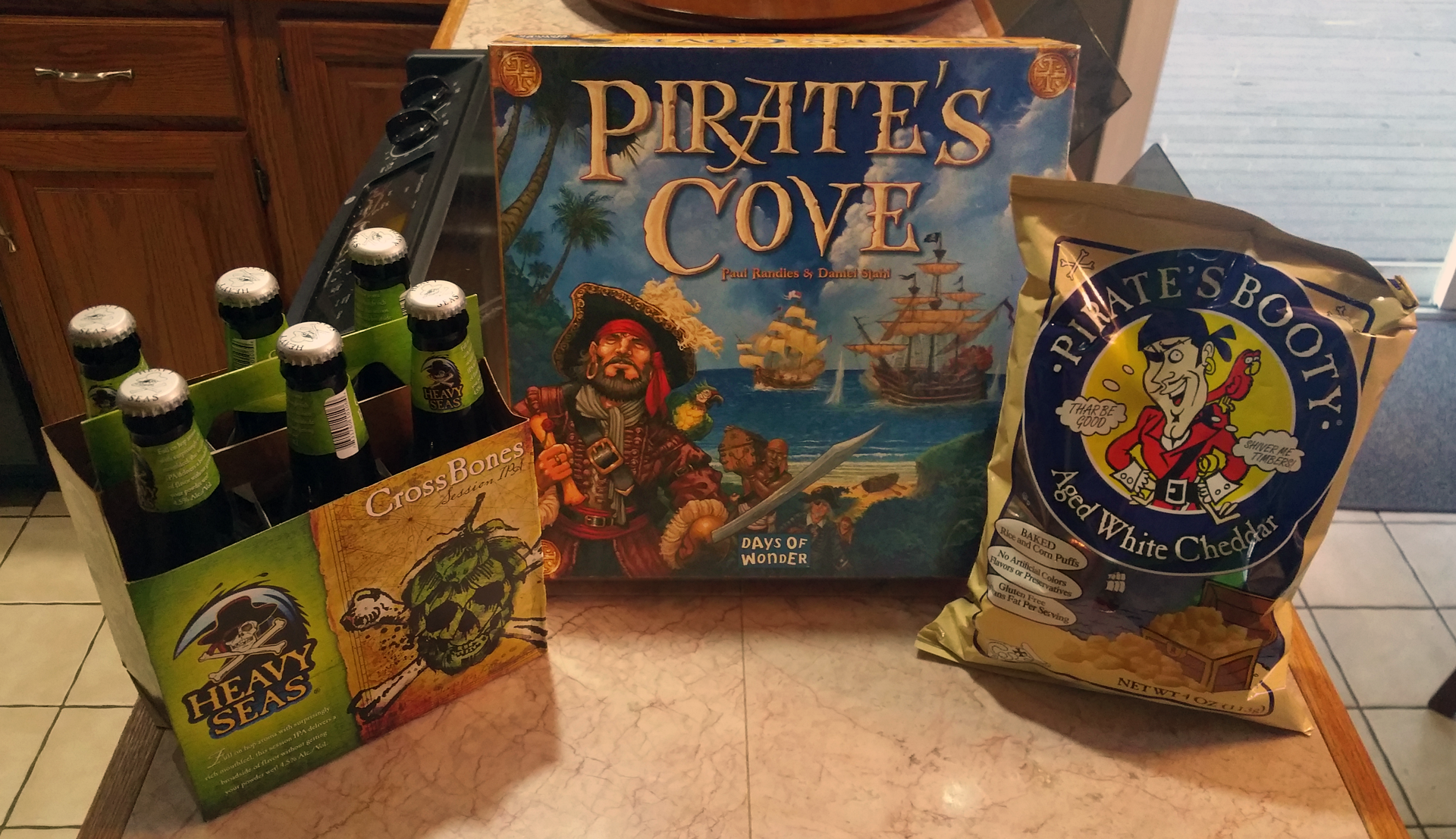 Pirate’s Cove by Days of Wonder does a good job of including all of the best aspects of being a pirate, covering everything from annoying parrots to mutiny to firing volleys of cannonballs at rival crews. And, of course, plundering gold.

Each player is captain of a pirate ship with the goal of gathering the most fame by the end of twelve months (rounds) by sailing around the eponymous Pirate’s Cove and surrounding islands, battling with other ships and burying their treasure on—where else?—Treasure Island.

And what kind of beer do pirates drink? Why, one with a skull and crossbones on the label, of course! Heavy Seas’ Cross Bones is a perennial IPA brewed in Baltimore, and the next best thing to rum while flying the Jolly Roger in this week’s Game & Beer Pairing!

Pirate’s Cove is big. Its large board and numerous components take up quite a bit of space, leaving very little room for beer. Bad form, Pirate’s Cove. But we found the rules easy to explain and pretty quick to learn, so that kind of made up for it.

Like most Days of Wonder games, Pirate’s Cove is undeniably pretty, and the rules are laid out well. A handy quick-reference sheet makes short work of remembering the sometimes-complex phase order.

The game is played over twelve rounds, and we got the hang of it by the second round. The variable turn order, however, got a bit chaotic; players’ turns are based on the islands they sail to, and some players wanted to jump ahead to other phases, forgetting that we weren’t moving clockwise like most games.

We solved this problem by jamming a Cross Bones in their greedy little pirate fist. Heavy Seas’ Cross Bones is a hoppy session beer, meaning it’s less than 5% ABV and very sippable, with strong notes of citrus and a bit of a floral scent. This IPA is about as bitter as your harrowing defeat at the hands of a Legendary Pirate.

Speaking of, Pirate’s Cove injects a bit of fantasy into the game by including the dangerous black-shipped Legendary Pirates, the likes of Blackbeard, Captain Hook, and the Flying Dutchman—who you usually want to avoid for most of the game, unless you team up with another ship or have really strong sea legs (you’ve beefed up your stats).

The funniest part of Pirate’s Cove is the laughably-powerful Parrot cards. Apparently having a wise old bird on your mainmast can somehow make you super fast or particularly good at combat—and if you’ve got a parrot, it takes the brunt of shots taken before your ship does. The verisimilitude is a bit off there, but it was a lot of fun to postulate on the size and prowess of these seemingly-magical oversized birds.

We particularly like that the object of the game has more to do with the amount of treasure you gain than the strength of your ship; strategy is more important than padding stats and combat (although it’s probably not a coincidence that Jeremy, who had the most powerful ship, also won).

Overall, we had a swashbuckling good time with Pirate’s Cove. In a world full of pirate-themed games, this one is a fun, easy-to-learn big box game with solid art and design—pretty much what we’d expect from Days of Wonder. Best of all, it manages to incorporates nearly all the things we look for in a pirate game. Yo-ho!

What’s your favorite Pirate saying? What do you sip on while singing “Yo Ho, A Pirate’s Life for Me”?