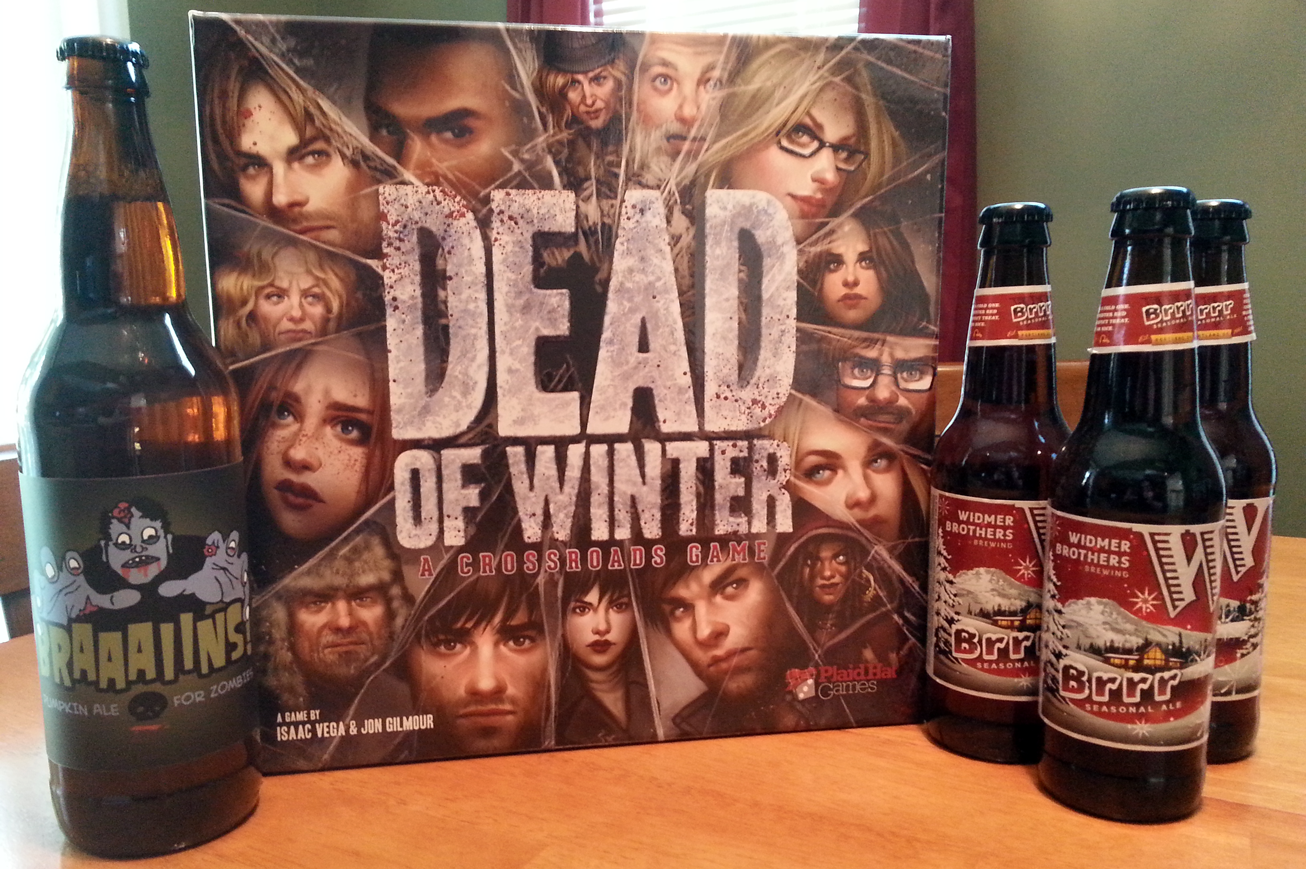 Dead of Winter is a pretty awesome game, and this time it’s not just us saying that. Even though it was just released last year in 2014, it’s won all sorts of awards, and we’ve never heard an unkind word said about it. So we decided to pick up a copy and see for ourselves—along with a fine selection of cold beer, of course, for this week’s Game & Beer Pairing.

Although we think that the zombie theme is a bit overdone in tabletop gaming, Plaid Hat Games put a couple of interesting twists on their contribution to the trope: instead of controlling a single character, each player controls a faction of survivors that collectively belong to a colony.

There are both cooperative and competitive elements to the game; together, the players are all (supposed to be) working toward a single main objective. But separately, each faction has their own secret objective, and though most of them are benign, there’s the chance that someone might secretly be a betrayer, working against the other players and the good of the colony.

Oh, and one more thing—you’re not just playing against zombies and still-breathing humans. You also have to contend with a harsh winter, which may leave your characters with frostbite every time they move to a new location (a slow and painful death).

To fend off the brutal cold and undead chompers, we picked a couple of beers that paired thematically. The first was Widmer Brothers’ seasonal winter ale, appropriately called Brrr. And then we just couldn’t help ourselves, attracted as we were by the label of Spring House Brewing Company’s pumpkin ale called—wait for it—Braaaiins!, which we affectionately referred to as our “zombeer.”

Dead of Winter is a bit daunting at first; there are so many options a player can take that it seemed like it took quite a while to nail the rules down. But once we got going, we quickly realized that most options were circumstantial, and that the down time seemed to go faster since you were mostly keeping an eye out for potential betrayal.

The opportunity to expand your faction of survivors is pretty much luck-based. By round 3, like magic—abra-cadaver!—one of Anthony’s two starting survivors was killed and he found himself with only one survivor for the rest of the game. Meanwhile, Mike grabbed himself four more characters in only three rounds, starting a veritable army against Anthony’s lone-wolf-trying-desperately-not-to-die.

The funniest moment of the game came when a Crossroads card gave Tom’s character, Sparky the Stunt Dog, the potential to dual-wield shotguns. Four men wrestled the charismatic bundle of fur to the ground, and offered him the opportunity to take all of the weapons from a location in exchanged for protecting their turf. A dog. A freakin’ dog.

We’re all in favor of not making concessions for specific characters, but a shotgun-toting dog might be a line in the sand (or snow, whatever). Still, the Crossroads mechanic was a welcome way to further include non-active players in the current turn (mitigating downtime) and added just a little more tension to an already tense game.

Through the whole two-hour game we only suffered one zombie bite, which was probably fortune more than anything; even though there is only one bite symbol on the 12-sided exposure die, there’s definitely the chance that it could cripple a player in the wrong place at the wrong time.

And speaking of zombies, a word of caution; If you’re into sweet beers, then Braaaiins! might be right up your ally, though it took us by surprise. As Eric pointed out, it tasted a bit more like a liquid version of Brach’s candy pumpkins than actual pumpkin. Still, at 8.3% ABV, after a couple of bottles you’re likely to stop caring.

Widmer Brothers’ Brrr threw us for a loop with all the different flavors they mentioned on their label—citrus, chocolate, caramel, hops, the kitchen sink—but when it came right down to it, it was a solid red winter ale with a malty finish that we enjoyed quite a bit and will probably repurchase before the season is over.

Anyhow, spoiler alert: Anthony was the betrayer, but didn’t get to do much betraying. To be honest, if you’re playing this game for the first time, we suggest removing any betrayal objectives so that everyone gets a chance to learn how to play—and to find the best way to screw your friends in forthcoming games.

Have you played Dead of Winter yet? What’s the sweetest beer you’ve had? Do you like brains?

About Dead of Winter