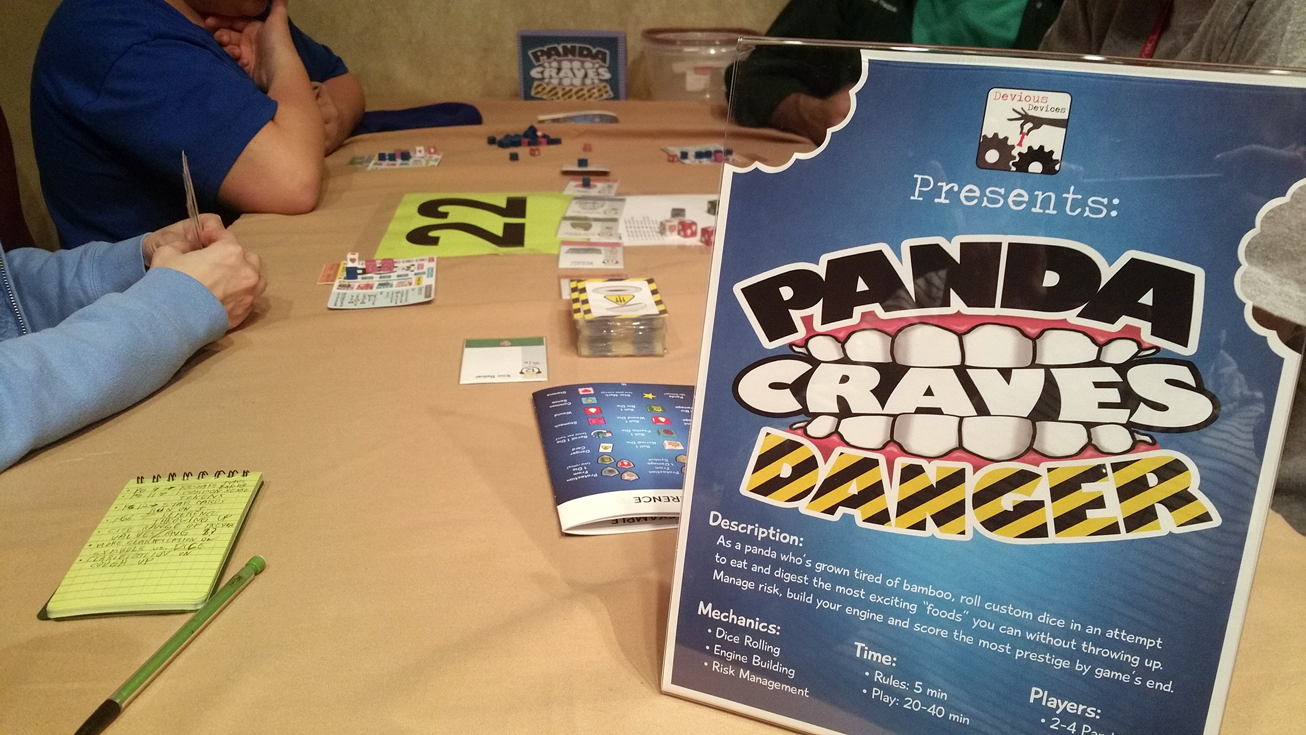 It’s two o’clock in the morning and I’m sitting at a long table with eleven other people, playtesting a party game that involves two dealers moving clockwise and shouting in people’s faces. Since noon I’ve had four beers, half a bottle of rum, a pint of whiskey, and a shot of Jager. The gentleman to my left is rhythmically pounding the table with his fist while he improvs a death metal song about an English teacher murdering my entire family. Said English teacher is dealing, screaming “Say what again!” in players’ faces—not that he’s angry person, but he’s channeling his inner Sam Jackson because that’s how this game is played. I probably have a big goofy smile on my face. And no, this isn’t a dream.

This is Metatopia, the playtesting convention held annually in Morristown, New Jersey. If you’ve never been to a tabletop convention before, don’t assume that this is status quo; far from it. In fact, we can’t think of a convention that features more chicanery, debauchery, and just general weirdness than Metatopia—which is why it’s the one we look forward to most each year.

At one point over the three-day weekend, I found myself playing an unpublished game by a designer that I respect a great deal. There were three other people playing, and one of them appeared to believe he was god’s gift to gaming.

The designer explained the rules—they were very straightforward—and we started playing. The player in question seemed to be having something of a tough time getting the hang of it (not sure why).

At one juncture, we had to remind him of a rule. He questioned the rule. When the designer explained the reasoning behind it, this player said:

Now, I know that sounds fairly innocuous, but I was kind of shocked. Playtesting is, in my opinion, the toughest part of game design. As game designers—or any creative, really—you’re putting a part of yourself into what you create. You’re making the world, you’re making the rules, and then you’re putting it in someone else’s hands and hoping that not only is it technically and mechanically sound, but that they enjoy it.

To hear someone simply say, “Well, that’s stupid,” can be damaging.

Imagine you wrote a novel. You’re very proud of what you’ve done, and you’re finally at a point that you want feedback. So you let a few people read it. Three people love it; the fourth tells you exactly what this guy said.

That negativity is likely going to resonate far greater than any praise. It always does.

Let’s take it a step further: Imagine that you’re not particularly confident, and one person’s feedback might make or break your aspiration to pursue publication. If they give constructive criticism (“I liked this and that, but I think that this ought to be that…”) maybe you’ll forge ahead.

But if they pass it off and utter, “Well, that’s stupid,” you might be crushed.

Luckily, this particular designer let it roll off him like water off a raincoat. He’s put out several games, so he’s probably used to it.

But come on, people. It’s fine to give your opinion—you should, that’s the point—but pose it as your opinion, and choose your words carefully when you’re dealing with something that someone created. Have some consideration.

And this concept goes both ways. Don’t just tell someone what you think they want to hear (“It was great! I loved it!”) if inwardly you’re thinking otherwise.

And don’t get me wrong, sometimes poorly-phrased feedback can still be (and might be intended as) helpful, hinting at underlying issues that provoke certain feelings or unhealthy behaviors in your players. For example, a frustrated player crying out “That’s unfair!” might seem like sheer negativity, but the root of their frustration might be a broken or unbalanced mechanic, and should still be considered feedback—even if the way it was stated wasn’t quite specific or to the point.

Fortunately, we had great feedback on our prototype game, Panda Craves Danger. Everyone who played had not only nice things to say, but provided valuable responses and weren’t afraid to point out issues they had—much like we do when we playtest another designer’s game.

Be honest, but try to be kind. Put yourself in the creator’s shoes and consider how you would want to be approached.

And go to Metatopia next year. It’s awesome.