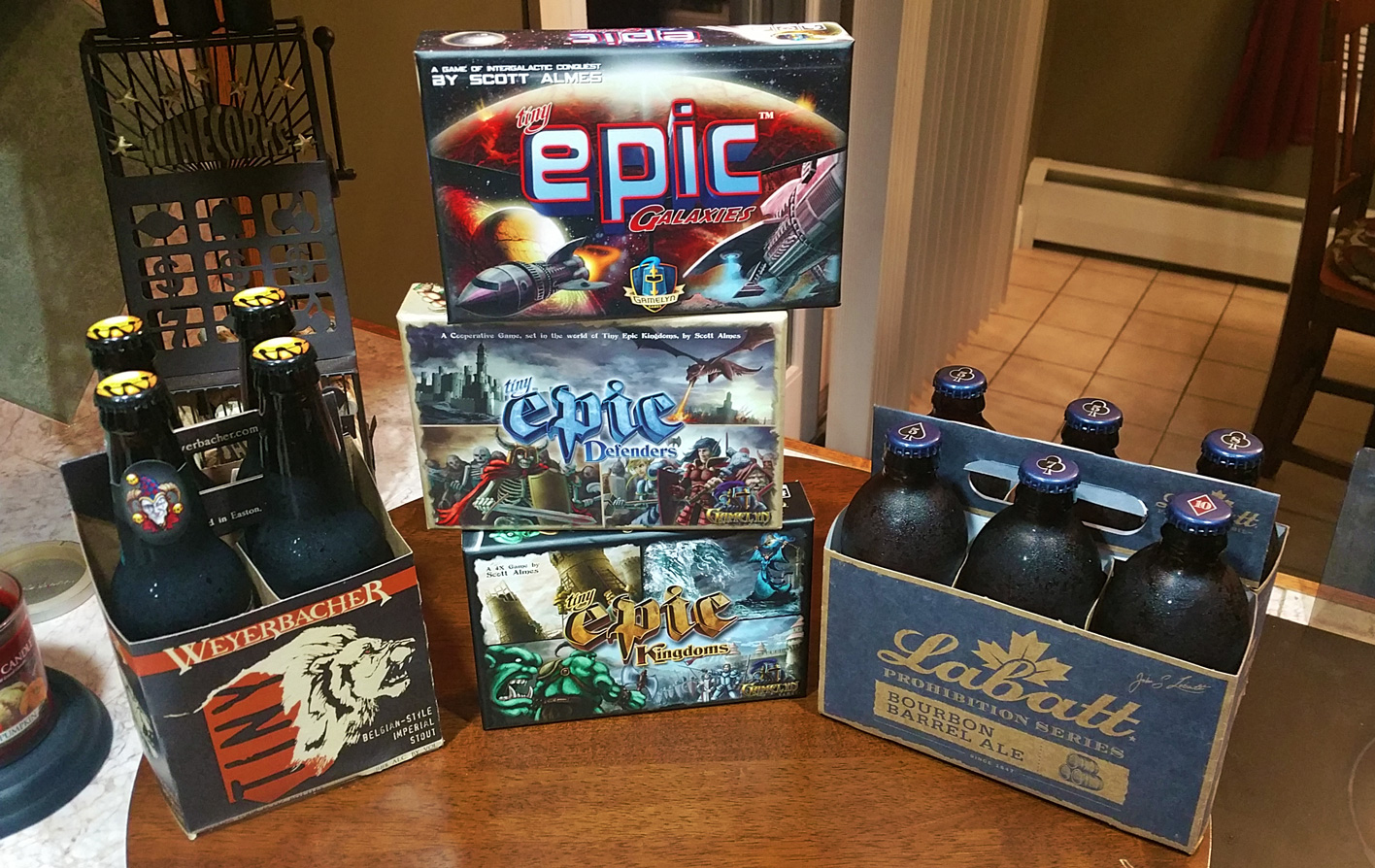 The old adage says, “Good things come in small packages,” and that holds true for our Game & Beer Pairing this week, a trio of Tiny Epic games from Gamelyn Games and some Tiny epic beer. As Sir Gamelyn puts it, they create “Tiny Epic experiences one thought-provoking adventure at a time.”

Tiny Epic Defenders is a co-op, resource management game in which players strive to defend their lands for a number of rounds against an ever-growing number of enemies. Tiny Epic Galaxies and Tiny Epic Kingdoms are both variants on worker placement and territory control with very different mechanics; in Galaxies, players roll dice and allocate ships in an effort to colonize planets. In Kingdoms, players move meeples and collect resources through limited action selection to reach an end-of-game condition.

We paired this game with a Tiny epic beer—literally, Weyerbacher Tiny is a locally-brewed, imperial stout that is anything but small (also pictured is Labatt’s Bourbon Barrel Ale, mostly because it comes in a tiny epic bottle), which, of course, we drank from tiny epic mugs.

The three Tiny Epic games in the series so far all strive for—and successfully have—a big-box feel from a small game. The mechanics of all three are unique to one another, yet none feel forced or contrived for the sake of a smaller box. All of them were, however, slightly more difficult to understand while sipping 11.8% ABV, even from a tiny epic mug.

Tiny Epic Defenders, while fun, was our least favorite of the three; it feels somewhat like a survival mode, with players simply trying to keep their lands from being destroyed enough rounds to reach the big baddie (which thankfully was not the dragon this time—it’s always the friggin’ dragon). This isn’t necessarily bad of course, as beating a co-op game every time you play is fairly blasé. We had the early game on lock down through thrifty use of the territory actions, but in the final round where “Mr. Tree” came out out to play we let all the lands burn to take him down in a single turn (with lots of luck).

Galaxies probably went over the best, with unique abilities for each destination planet in the game that are accessible to every player at some point. The dice rolling, however, does add a stronger element of luck (or in some cases, lack thereof) not found in the other two—which may be better for the less strategy-inclined gamer. Eric himself felt Luck’s bitter sting, leaving his galaxy two steps behind the others nearly the whole game. Still, even a loss is fun when you are colonizing alien worlds with wooden spaceships.

Tiny Epic Kingdoms was new to all of us. It felt very much like traditional territory control, though there is a unique combat element that involves not rolling, but placing a D12 on a particular side to measure your commitment of resources to the war effort. Through cunning and subterfuge, Eric managed to quickly outpace the other kingdoms to trigger the end game, sadly to lose in a tie-breaker to Anthony and his “stupid tower” (Eric’s words.)

While the games might be easy to pick up and play for most gamers, Tiny (the beer) is not for the casual beer drinker—it’s a Belgian-inspired imperial stout with strong flavor and a staggering ABV. If you’ve never had an imperial stout before, take a tiny epic taste before you dive into this one. It’s pretty heavy, with potent notes of roasted barley and chocolate. If you can get ahold of it, we recommend you try it for its big flavor; just go easy.

What are your favorite “epic” small box games? Which beers do you drink for their “big” flavor?

About the Tiny Epic series