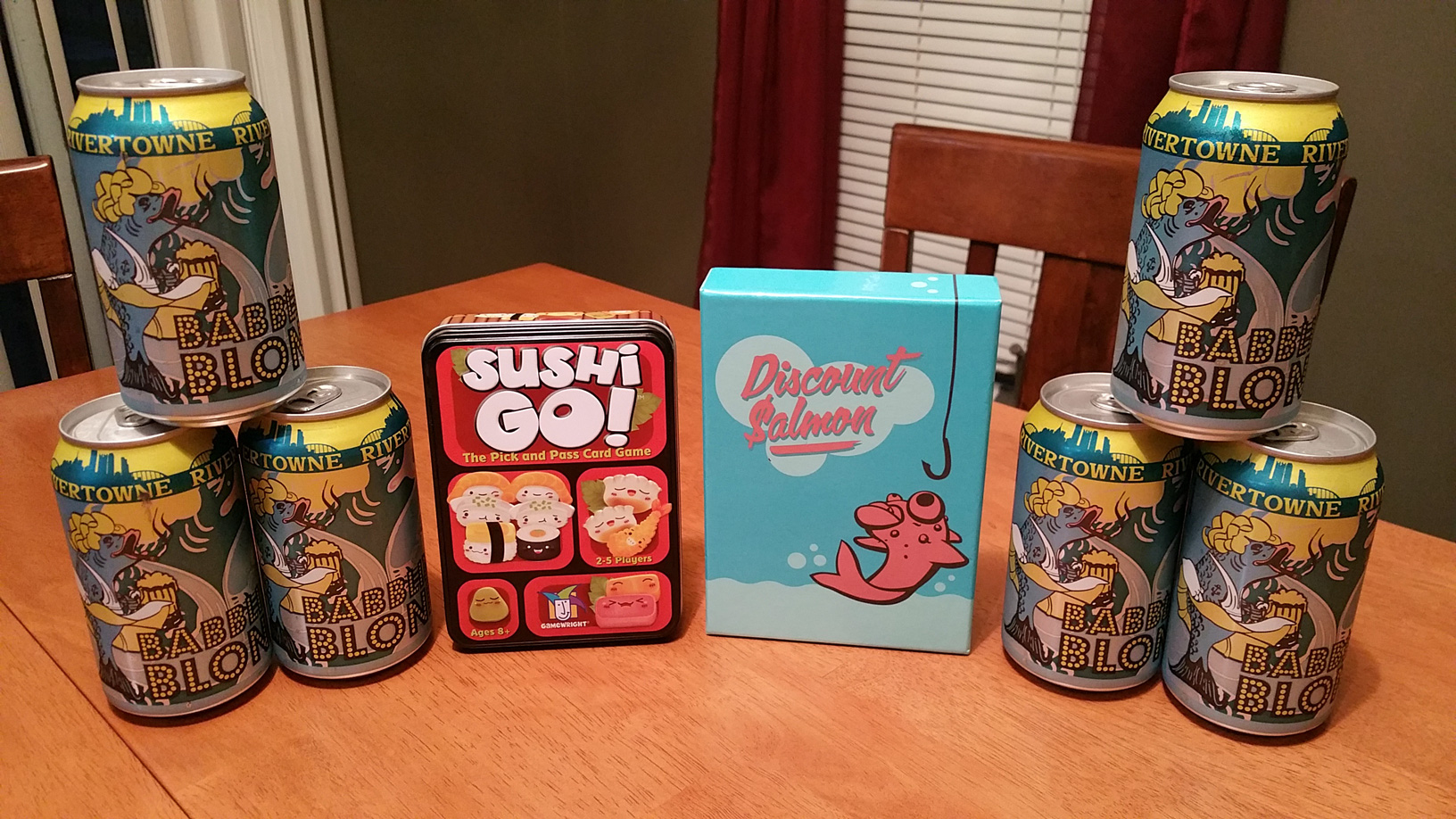 What’s better than drinking a beer sporting an illustrated Marilyn Monroe fish? Why, playing a couple of fish-based games at the same time, of course!

Being fans of unusual, intriguing packaging, we couldn’t help but pick up the strangely-alluring Babbling Blonde by Rivertowne Brewing of Pittsburgh for this week’s Game & Beer Pairing.

Discount Salmon is the trick-taking co-winner of the 2013 Tabletop Deathmatch. Players are fishmongers (their word, not ours) who must chuck cards from their hand as quick as possible to “fix” the various ailments that plague the salmon of Lake Miasma in an effort to “mong” the most fish by the end.

Sushi Go!, a perennial favorite of ours, is a card-drafting game in which players collect happy little sushi dishes in an attempt to score the most points in three rounds. Collecting the most Maki Rolls, pairing up Tempura and covering Nigiri with Wasabi are just some of the ways to score.

It’s ironic that Discount Salmon is themed around a contaminated lake, because one might think that the Babbling Blonde ale was crafted using water from the same (or, more likely, one of Pittsburgh’s polluted bodies).

The Babbling Blonde had a slightly malty, sweet taste with just a touch of hops and a tinge of something that borders on objectionable.

As Eric was sure to point out after a few sips, “It’s not actually that bad,” which implies that the expectation bar was about as low as Peter Dinklage’s limbo pole. All that might sound discouraging, but it was actually a very easy-to-sip beer that paired well with these two fast-paced games about dead fish.

Our advice with Discount Salmon is to have a sturdy table and no drinks on the table. Hands and elbows fly, cards are thrown every which way (frequently right off the table), and there’s usually quite a bit of shouting, swearing, and name-calling. All in good fun, of course.

This session was no exception to the madness, though we managed to skate by with only a single dinged card and two hurt egos (we take our fish-slapping seriously, so a win from a nooby was crushing.) After three rounds, we decided to call it quits since the beer needed to stay far away while we played.

The dichotomy between these two games back-to-back was astounding; the raucous nature of Discount Salmon segued right into a subdued, contemplative game of Sushi Go! Our game group had played it before, so it was an almost-entirely silent cycle of pick, reveal, pass; pick, reveal, pass.

Round one was all about the Wasabi-Nigiri combos, creating two early leads. After a quick break to refill our glasses “from the river,” our second round saw lots of happy Sashimi with a few lonely Tempura spread around the table. The third round played out exactly as any sushi game should–a pudding fight to the death–with the winner of the game walking away (surprisingly) pudding-less.

And despite our original objections, the four of us drank up the blonde ale, well, like fish, and by the end of the night, that marine Marilyn Monroe was looking pretty good.

What beer would you pair with these games? Know any other good fish games?